Welcome, foolish mortals! This is the first ever 'Haunted Mansion' quiz, based on the movie starring Eddie Murphy and the Disneyland ride. Some questions require some thinking and/or background knowledge. Have fun... if you dare.

Quiz Answer Key and Fun Facts
1. Which family owned the mansion for many generations?

The original Gracey patriarch built the mansion. Master Gracey (in the movie) and Ramsley, although both dead, have a history that is the subject of the backstory of the movie. Ramsley, the butler, poisoned the Master's lover, causing him to commit suicide.
2. What are the names of Jim's children?

Michael had recently turned ten, and Megan was twelve.
3. What is the name of the butler of the estate?

Ramsley is played by Terrence Stamp. The butler is the bad guy again!
4. How many Singing Busts were there?

The hilarious Singing Busts are not only featured in the movie's graveyard scene, but also in the ride. Nearly every word Jim ends with, they continue with a song.
5. Rob Minkoff, the director of the film, is also the director of which of these movies?

Minkoff also directed the original "Stuart Little" film.
6. Which barbershop quartet that performs on Disneyland's Main Street USA, is featured in the film?

7. Madame Leota is named after a real person.

She is named after Imagineer Leota Toombs Thomas, who worked on numerous Disneyland projects in the 1960s. Another interesting tidbit: the Graceys are named after Yale Gracey, one of the original designers of the ride.
8. When Jim tells the kids he will be stopping at the mansion to do his business, how long did he promise them it would take?

Of course, when the storm arrives, the Evers find themselves stuck in the mansion for the night.
9. In which state does the movie take place?

If you look closely at Jim's license plate when the car pulls up, you can see that it is a Louisiana plate. For all you die-hard fans of the ride, you will recall that the attraction is in Disneyland's New Orleans Square. New Orleans, Louisiana.
10. Which magazine did Jim find in his son's room?

Early in the movie we realize that Michael hates spiders, and doesn't have the nerve to kill one. In the end, he realizes he must face his fear in order to save his family.
12. What is the name of the maid of the mansion?

Dina Spybey plays the hyperactive Emma, one of the good (but a little crazy) ghosts of the estate. Wallace Shawn plays Ezra. "Unexplainable!"
13. In the end of the film, how many souls are released from haunting the mansion?

The ghouls and ghosts "come out to socialize", although Ramsey goes to hell.
14. Which song do the Singing Busts NOT sing?


Answer: They sing all of these.

"Grim Grinning Ghosts" is sung very briefly as Jim and the kids approach the busts, although it is stopped abruptly.
15. You may recall some terrifying 'jump-in-your-seat' moments in which a character turns out to find the butler standing behind them (cue jump music). How many times does this happen? 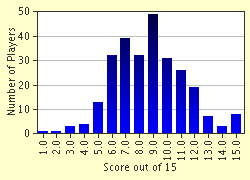 
Other Destinations
Explore Other Quizzes by True7hFan