'Saturday Night' is a beautiful, haunting song by the Eagles that, inexplicably, has not got its own quiz yet, so I thought I'd remedy this.

Quiz Answer Key and Fun Facts
1. In the first line of the Eagles' song 'Saturday Night', what does it seem like now?

"Seems like a dream now, it was so long ago".

'Saturday Night' was the only Eagles song for which the four original members of the Eagles (Glenn Frey, Don Henley, Bernie Leadon and Randy Meisner) were co-credited as songwriters.
2. What burned so bright in the second line of the song 'Saturday Night'?

"The moon burned so bright and the time went so slow"

Sometimes it seems to me that good times go very fast, and it's only the bad times that linger, but if you really think about the good times, it can be as if they lasted a lifetime. 'Saturday Night' was released on the Eagles' second album, 'Desperado' in 1973.
3. What did the singer give his lady in the third line of the song 'Saturday Night'?

The album 'Desperado' was about Wild West outlaws and the two tracks that were released as singles were 'Tequila Sunrise' and 'Outllaw Man'. 'Saturday Night' was never released as a single, although it was covered by Billy Dean on his album 'Common Thread: The Songs of the Eagles'. The song suits his voice well.
4. In the last line of the first verse of 'Saturday Night' by the Eagles, what was high on the wing?

"The bluebird was high on the wing"

Those bluebirds get everywhere...now there's an idea for a quiz! On the back of the album cover for 'Desperado', the Eagles are playing dead and they are joined by J D Souther (a country rock singer and actor who co-wrote some of the Eagles' biggest hits, like 'Heartache Tonight' and 'New Kid in Town') and the legendary Jackson Browne.
5. The singer of 'Saturday Night' found his sweetheart and held her tight, but what does she anxiously ask him?


Answer: Was I all right?

Oh, we ladies. You rarely find the gentlemen asking these things, although 'Do you love me?' was a hit for The Contours, a male group. 'Do I look all right?' was a question from the great Eric Clapton song 'Wonderful Tonight'. 'Does my bum look big in this?' is an unanswerable question.
6. What did the years bring by the singer's door in the Eagles' song 'Saturday Night'?

"The years brought the railroad
It ran by my door"

Following the UK, the first steam railroads in the USA were built in the 1820s and 30s. However, another song on the album ('Doolin Dalton') details a gang that operated in the 1890s, which was when private entrepeneurs like Cornelius Vanderbilt were getting very rich with private railroads.
7. Is the singer's house in good repair in the song 'Saturday Night'?

"Now there's boards on the windows
And dust on the floor"

'Saturday Night' was also on the compilation box set 'Selected Works: 1972-1999' that was released in 2000.
8. We learn that the lady of the song 'Saturday Night' is spending her time with another man now - who or what is the singer spending his time with?

Something obviously upset their relationship, and in 1980 the Eagles acrimoniously split up, with Glen Frey and the 'fifth Eagle', Don Felder, famously declaring that they couldn't even be in the same state together. Although after 14 years and successful solo careers for the members, they reformed, Don Felder was fired and subsequently sued the group. The suit was settled in 2007.
9. Please find the missing word from the lyric of 'Saturday Night' below (this should be easy for Walter Scott fans). "What a tangled ___ we weave"

Walter Scott wrote "Oh what a tangled web we weave
When first we practice to deceive" in 'Marmion' in 1808. Researching this quiz, I discovered that this quote is often mistakenly attributed to Shakespeare.
10. The second chorus of the Eagles' 'Saturday Night' has the singer choosing a friend and losing a fight. This time, what does the girl anxiously ask him?


Answer: Are you all right?

So ends this little ballad, which is one of my favourite Eagles' songs. Bernie Leadon plays banjo, fingerpicked guitar and mandolin, making an interesting and original sound. I hope that you've enjoyed the quiz and that it might inspire you to listen to the song.
Source: Author Quiz_Beagle 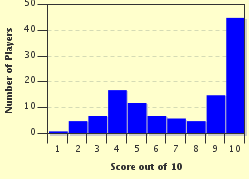