Oh No, not another tough Beach Boys quiz. This time I threw in a few softballs and a couple of curveballs to keep you honest. It's mostly Capitol singles and Beach Boy Hits in the USA. These are the "I never thought about that before" questions.

"Surfin' Safari" was the first on Capitol. Released in June '62
Surfin" was the first release ever, but it was on Candix and the X label in December '61.
2. Why was Brian Wilson's name removed from the writing credit on the "Surfin' USA" single in the USA and Canada?


Answer: Arc Music publishing threatened to sue Capitol because the melody of Chuck Berry's "Sweet Little Sixteen" was being used by Brian Wilson

Chuck Berry was in jail at the time, so Arc Publishing intervened on his behalf. Arc was concerned about Chuck Berry not getting ripped off, not to mention their own pocketbook.
The other choices were my way of throwing in a little humour, in case this gets too tough for most.
3. What Billboard Top 40 single by the Beach Boys did not use drums of any kind? They may have improvised using other non musical instruments. Just use the process of elimination and go thru the Beach Boys discography and eliminate all the Top 40 singles that used drums, then you'll find what you're looking for. See I told you I'd be helpful.

"Barbara Ann" if you listen to it closely you can hear a tambourine, handclapping and Carl's famous ashtray banging on the table. But there were no conventional drums used on the "Party" Album. There were some bongo drums used on some other songs on the album but not on "Barbara Ann".
4. We would all agree The Beach Boys are known for their harmonies. However, in which Capitol "A" side single that made the Top 40 in the USA, did Brian Wilson sing solo without any Beach Boys' backing vocal?

Appropriately enough "Caroline No" was released as a solo single under Brian's name, Brian Wilson. Released in January '66.
5. In the USA this Capitol song was relegated as the "B" side, though originally Capitol intended it to be the "A" side. Which Billboard Top 40 song was it?

"Surfin' Safari" received one in June '62. "Surfin' USA" was never issued one in the USA.
"Ten Little Indians" got one in November '62.
"I Get Around" in '64.
7. Which was the last Beach Boys' Capitol single to make the Top 40 on either Billboard or Cashbox? This excludes the Beach Boys Medley which made the Top 40 in '81. You'll have to put on your thinking caps for this one. They can't be all easy or I would ruin my reputation, such as it is. But it's still not that difficult.

"Break Away" made it to Number 38 on Cashbox in July '69.
"Surfin' USA" was a hit twice on Billboard in the US. Once in April '63 and the next time was September '74 at Number 36. This was to capitalise on the "Endless Summer" release in '74.
This was a bit of tricky one which required some thought. I guess I was up to my old tricks on this one. Old habits are hard to break.
8. What was Brian Wilson's biggest Billboard hit written in '63, whether he wrote the lyrics or melody, or both?

"Surf City" wins by the length of a surfboard. Brian wrote the first couple of lines and the melody, then gave it to Jan Berry. Jan finished it and took it to Number One on Billboard with Dean and Brian.
"Surfin' USA" only made it to Number Three.
9. Which Beach Boys' Capitol single did The Honeys first appear on, in the USA?


Answer: Be True To Your School

"Be True To Your School" was the biggest Top Ten hit on Billboard The Honeys were ever on. Released in October '63.
10. Capitol Records issued a promo only single titled "Salt Lake City" to Salt Lake City, Utah. Why?


Answer: The Beach Boys were the Number One group in the State so they wrote a song about Salt Lake City to show their appreciation to their fans

"Salt Lake City" was a tribute to their fans. A thank you for all their support.
11. Did Dennis Wilson ever share a writing credit on an "A" side Capitol single in the USA?

Dennis did so on "Friends" a song he co-wrote with Brian, Carl, and Al Jardine. Released in April '68.
12. What was the first song Bruce Johnston produced on a Beach Boys' single in the USA? It could be the "A" side or "B" side of the record.


Answer: Bluebirds Over The Mountain

"Bluebirds Over The Mountain" was a project he started for the Redwoods (pre Three Dog Night) and was never finished, so Bruce figured it would be a good idea to have it as The Beach Boys' next single. Released in November '68.
"The Nearest Faraway Place" was an instrumental piano piece Bruce produced as the "B" side to "Cottonfields". Released in April '70 in the US.
13. Capitol released a series of Starline singles to promote past hits and keep them alive during the 60s, 70s and 80s. The Beach Boys were no exception, but there was one incongruous Starline single on the green swirl label that did not fit the bill. The "B" side was "She Knows Me Too Well" and the unlikely candidate for the "A" side was what song in the US? Did I forget the A in US. Oh well, I think you know the country by now.

It lasted two years as a Starline single and then one of the braintrusts at Capitol must have realised that "Ten Little Indians" was never really a hit. What genius at Capitol thought that "Ten Little Indians" would make a good choice anyway.
14. Back in the 60s another genius at Capitol thought it would be a good idea to place the same song on both "Best of the Beach Boys, Vol.2" and "Best of the Beach Boys, Vol.3". It was like the execs at Capitol didn't have enough songs to choose from by '67. Anyway, what song was duplicated on both of these albums in the USA?

"409" was also duplicated on the "Surfin' Safari" and "Little Deuce Coupe" albums in the USA.
15. What was Carl Wilson's first lead vocal on a Beach Boys' single in the USA, either on the "A" side or "B" side of the record?

"Girl Don't Tell Me", the flip side of "Barbara Ann" was Carl's big chance to impress Brian. Released in December '65.
Source: Author TOKENHIPPIE 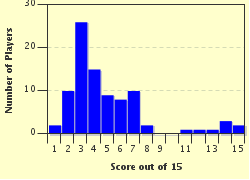