These are 25 of the greatest songs and bands ever assembled. See if you can figure them out. It will span all genres of music from the 60s, 70s and 80s.

Quiz Answer Key and Fun Facts
1. Perhaps the best known band of all time, The Beatles had many hits. Which of these isn't one of them?


Answer: Band on the Run

"Band on the Run" was written and performed by former Beatle Paul McCartney. However, when the song was a hit, he was no longer a Beatle and the song was released by the Wings.
2. The Who's classic album "Tommy" was a rock opera and movie. Who played Tommy in the film version?

Pete Townshend and John Entwistle both played themselves in the movie. Keith Moon had a double role as both himself and Tommy's Uncle Ernie.
3. Which famous guitarist is nicknamed Slowhand?

One of Clapton's earliest shots at fame was as the guitarist for the Yardbirds. He is considered one of the greatest guitarists of all time.
4. Which one of these people was NOT one of the founding members of Cream?

John Mayall was never in Cream. Eric Clapton was the guitarist as well as a vocalist. Jack Bruce was the lead singer and bassist. Ginger Baker played the drums.
5. Who was responsible for the mega-hit "American Pie"?

Don McLean wrote the song as a tribute to Buddy Holly, Ritchie Valens, and J. P. Richardson Jr., a.k.a. The Big Bopper. "American Pie" also inspired the phrase "the day the music died".
6. Which of these songs did NOT appear on the album "The Stranger" by Billy Joel?


Answer: Everybody Has A Dream

"Everybody Has a Dream" is performed by Billy Joel. "Maggie May" is one of the best known songs that Rod Stewart has performed.
8. What character did Meat Loaf play in the film version of "The Rocky Horror Picture Show"?

Motley Crue was also responsible for other great songs like "Shout at the Devil" and "Too Young to Fall in Love." They were originally made up of Tommy Lee, Nikki Sixx, Mick Mars, and Vince Neil.
10. Bon Jovi is very well known in the world of music. Which of these songs do NOT appear on the "Slippery When Wet" album?

"Bad Medicine" appeared on the band's fourth album. "Slippery When Wet" was Bon Jovi's third album.
11. Rick Allen continued to perform with his band even after losing his left arm. What is the name of his band?

Rick Allen lost his arm in a car crash. His accident was the reason for the delayed release of Def Leppard's "Hysteria" album.
12. Which Guns N' Roses song features the lyrics "She's got eyes of the bluest skies"?

"Paranoid" was the first Sabbath song to gain substantial radio air play. They are also well known for "Iron Man" and "War Pigs", but "Paranoid" was their first hit.
14. "Gimme Three Steps" is a song written by .38 Special.

"Gimme Three Steps" was written by Lynryd Skynyrd. They are also very well known for "Sweet Home Alabama" and "Free Bird".
15. What is the real first name of Ozzy Osbourne?

Ozzy Osbourne was the lead singer of Black Sabbath from 1968-1979. He went solo after he was fired from Sabbath and had huge hits with "Crazy Train" and "Bark at the Moon". His full name is John Michael Osbourne.
16. Aerosmith's original lineup featured all of these people except whom?

Brad Whitford joined the band in 1971 after the departure of Ray Tabano. The original lineup was Steven Tyler, Joe Perry, Ray Tabano, Tom Hamilton, and Joey Kramer.
17. Which of these songs was NOT a hit for Kansas?

"Chasing Shadows" was never on the Billboard Top 100. All of the other songs made some indent in the top 100 chart.
18. What is the real name of the lead singer of The Police?

Sting's real name is Gordon Sumner. Andy Summers is the guitarist and Stuart Copeland is the drummer.
19. Poison is another great band, but which of these did NOT appear on the "Open Up and Say...Ahh!" album?


Answer: Talk Dirty to Me

Poison is made up of Bret Michaels, C. C. DeVille, Bobby Dall, and Rikki Rokkett. "Talk Dirty to Me" appeared on their debut album "Look What the Cat Dragged In."
20. Eddie and Alex Van Halen formed the group Van Halen along with David Lee Roth and Michael Anthony. Which song was considered by fans to be a betrayal of their image?

"Jump" was considered by fans to be a betrayal of their image because it featured Eddie Van Halen playing a synthesizer. "Jump" turned out to be one of the greatest songs that Van Halen ever wrote.
21. AC/DC came out with which album after the death of Bon Scott?


Answer: Back in Black

Brian Johnson took over for Bon Scott after his death. "Back in Black" featured the song "You Shook Me All Night Long" and the title track "Back in Black".
22. Who was the first member of Led Zeppelin to pass away?

John Bonham died in 1980. All other members of the group survived much longer than that, well into the 21st century.
23. Which Metallica album was the first one to feature Jason Newstead as the bassist?


Answer: And Justice For All

"...And Justice For All" features the hits "...And Justice for All" and "One." It was Metallica's fourth studio album.
24. Iron Butterfly was best known for their 17 minute heavy metal song "In A Gadda Da Vida."

"In A Gadda Da Vida" was originally titled "In the Garden of Eden" or "In the Garden of Venus." Doug Ingle slurred the words because he was under the influence of LSD.
25. Which KISS song was written about a fan who was killed in a car accident? 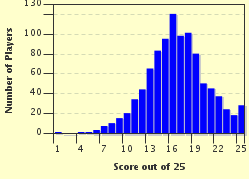 
Other Destinations
Explore Other Quizzes by animefreak1124