This quiz is about some of the world's greatest rock bands. I hope you have a rockin time playing this quiz.

Quiz Answer Key and Fun Facts
1. This band's most famous song is 'Bohemian Rhapsody'. They are from Britain and they are notorious for their complex harmonies. What band is this?

Queen is an English rock band that have sold 300 million albums to date.
They have been inducted into the Rock N' Roll Hall of Fame and have received numerous awards and honours. The original members of this legendary group are Roger Taylor, John Deacon, Brian May and Freddie Mercury.
2. The song 'Don't Cry' was written and performed by Guns N' Roses.

'Don't Cry' is a power ballad written by lead vocalist of Guns N' Roses, Axl Rose, and the rhythm guitarist, Izzy Stradlin. This song is about a girl Izzy Stradlin used to date whom Axl Rose was attracted to.
3. This band is led by Steven Tyler and their first Billboard number one hit was 'I Don't Want to Miss a Thing'. What American rock band am I talking about?

Led Zeppelin were a rock band from England. Led Zeppelin are regarded as one of the most successful and influential bands of all time. Their song 'Stairway to Heaven' is considered one of the greatest songs ever made.
5. This is an Irish rock band, who have won 22 Grammy awards. This band is:

U2 are an Irish rock band, consisting of four members: Bono, The Edge, Adam Clayton and Larry Mullen, Jr. They have won 22 Grammy awards more than any other group, and they have won two Golden Globes for Best Original Song.
6. They come from Australia and some of their most famous songs include 'Back in Black' and 'Thunderstruck'. What Aussie rock band is this?

AC/DC are a rock band from Australia. Their album 'Back in Black' is one of the best-selling albums of all time. AC/DC have been inducted into the Rock and Roll Hall of Fame, and they are considered as pioneers of heavy metal.
7. 'I...Have become comfortably numb'. Which legendary band owns these famous lyrics?

The song mentioned in the question is 'Comfortably Numb'. Pink Floyd was an English rock band, beginning their careers as musicians in the 1960s. They have sold over 250 million records internationally.
8. Which 1990s band was led by Kurt Cobain?

Nirvana was an American rock band. They are widely regarded as one of the most important and influential bands of the modern era. Their most famous song is 'Smells Like Teen Spirit', which won them multiple awards.
9. We are the best-selling band of all time. We started our careers in the 1960s and we are from Britain. Who are we?

The Beatles are indeed the best-selling band of all time. They have won seven Grammy awards and an Academy Award for Best Original Score. The members of this band were: John Lennon, Paul McCartney, George Harrison and Ringo Starr.
10. 'New Kid in Town' and 'Hotel California' are two famous songs owned by which 1970s rock band?

Eagles are an American band consisting of: Glenn Frey, Don Henley, Bernie Leadon and Randy Meisner. They have been inducted into the Rock and Roll Hall of Fame and have sold over 150 million records.
Source: Author Fangy_Junes 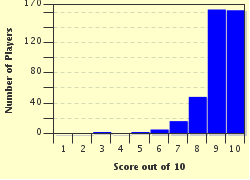 
Other Destinations
Explore Other Quizzes by Fangy_Junes