The radio waves in the 1970's and 1980's were filled with a new sub-genre of music called arena rock. Arena rock groups generally sold out entire arenas and had music that was a touch of rock and pop.

Quiz Answer Key and Fun Facts
1. This guitar virtuoso dominated the radio with his highly popular songs such as "Show Me the Way" and "Do you Feel Like I Do?". He was most noted for using a talkbox, a device that gave his guitar the effect of "talking."

His live album, "Frampton Comes Alive," was the most popular live album at the time and has sold over 6 million copies.
2. This band quickly rose to the top of the rock world with such classic hits as "Juke Box Hero" and "Hot Blooded." Mick Jones was the guitar player for this stadium-filling band.

Foreigner is still touring in the 21st century, but Mick Jones, founder of the group, is the only original remaining member.
3. Steve Perry's unmatched voice led the way for this chart-topping band. Favorite hits for the band include "Lights" and "Don't Stop Believin'."

The guitar player for Journey, Neal Schon, played for Santana at the age of 15.
4. Steven Tyler and Joe Perry are the two most recognizable names of this Boston-based group. Their first album was released in 1974.

The bad boys from Boston played without their guitar player, Joe Perry, in 1979, but continued with him in 1984.
5. This band, highlighted by the vocals of Dennis DeYoung and singing and guitar playing of Tommy Shaw. This band, formed originally in 1961 didn't peak until 1978.

Styx hit big with their 1983 hit, "Mr. Roboto". Chuck Panozzo and John Panozzo started the band as Tradewinds with their neighbor Dennis DeYoung in 1961. They became TW4 in 1965 and Styx in 1972.
6. This band, from the same named place became largely successful in the 1970's. "More Than a Feeling" is arguably their greatest song.

Their self-titled debut album was at one time the best-selling debut album of all time.
7. The flamboyant Freddy Mercury of this British band was one reason why they were so successful. Brian May's excellent guitar playing in such classics as "Another One Bites the Dust" and "Bohemian Rhapsody" solidify this band as one of the greatest arena rockers of all time.

In November, 1991, Queen saw the death of Freddy Mercury due to AIDS.
8. The Motor City Madman had a huge career with hits such as "Stranglehold" and "Cat Scratch Fever." What was his name?

Ted Nugent was a part of the supergroup Damn Yankees and had a hit with "High Enough."
9. This New York-based band often painted their faces black and white. Their hit song "Rock and Roll All Nite" was their crowning achievement.

KISS had a comic book made by Marvel, showcasing the band as superheroes.
10. This Canadian trio consisted of three great musicians: Geddy Lee, Neil Peart, and Alex Lifeson. "Spirit of Radio" and "Fly by Night" are two of the greatest songs produced by the band.

Rush released their first, self titled album in 1974 with John Rutsey on drums. He was later replaced with Neil Peart in time for their 1975 release "Fly By Night".
Source: Author jgron4 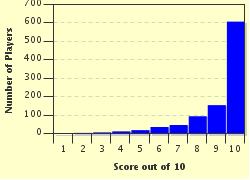 
Other Destinations
Explore Other Quizzes by jgron4