How well do you know the musicians that shaped rock and roll?

Quiz Answer Key and Fun Facts
1. This guitarist, originally named "Johnny," was born in 1942 in Seattle, Washington. He would go on to be arguably the greatest guitarist of all time, though he only lived to be twenty-seven. If I told you what band he was in, it would be way too obvious.

Hendrix was in The Jimi Hendrix Experience. He played classics such as "Voodoo Child (Slight Return)" and "Purple Haze." He appeared at Woodstock in 1969.
2. This drummer died young, at age 32 in 1978. He was known for his intense style of playing and destructive behavior. On the "Smothers Brothers Comedy Hour", he overloaded his drums with explosives. They went off at the end of the performance, leaving Pete Townshend with permanent hearing damage.

Aside from being intense and destructive, Moon was also known for his ability to play drums as a lead instrument, not just to keep the beat. The classic example of this is The Who's "Happy Jack."
3. This singer, originally named Stephen Tallarico, was part of the band who made hits such as "Dream On" and "Sweet Emotion."

Tyler and Aerosmith are the bestselling American hard rock band of all time. They have sold over one hundred and forty million albums worldwide.
4. This frontman was knighted in 2003 for "services to popular music." His bandmate Keith Richards criticized the honor, though this singer suspected that Richards was actually a bit jealous.

Jagger has contributed to both "popular music" as well as biology. Two fossils were given scientific names for him; a snail called Anomphalus jaggerius and a trilobite named Aegrotocatellus jaggeri.
5. This guitarist started with The Yardbirds, then moved on to become the lead guitarist of arguably the greatest rock band of all-time. Every rock fan should know this man, who played with Robert Plant, John Paul Jones, and John Bonham.

Page was known for a wide variety of playing styles, such as playing the guitar with a violin bow or using a double-necked guitar.
6. This Beatle was born in 1942, had a successful career after the band broke up, and played bass.

In 1997, McCartney, like Jagger, was knighted. He can play bass, piano, organ, guitar, drums, other percussion, and the ukulele.
7. This singer began as a member of Black Sabbath, and also had a great solo career. He is one of the most famous men in rock and roll.

Osbourne has also gained fame from his TV show, "The Osbournes", which ran from 2002 to 2005.
8. This lead singer led the singing of Lynyrd Skynyrd from its beginnings in 1964 to 1977, when a plane crash killed three of the band members. His brother Johnny took over in 1987 when the band reunited.

Van Zant's friends recall that he would say he would never see the age of thirty, and that he wanted to die with his boots on. He died at twenty-nine.
9. This punk rocker was the guitarist for The Ramones throughout their twenty-two years. He died in 2004.

Johnny Ramone, originally named John Cummings, never reconciled with Joey. Even as Joey lay in a hospital bed in 2001, Johnny would not call his former bandmate.
10. This guitarist and co-founder of Van Halen was ranked at seventh on Rolling Stone's best guitar solos list for "Eruption."

Van Halen is one of only five rock bands to have two albums sell over ten million copies each in the United States, with their self-titled debut and "1984".
Source: Author chrono8008 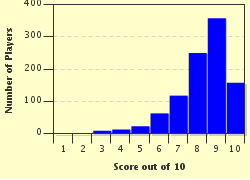 
Other Destinations
Explore Other Quizzes by chrono8008