This quiz will describe a classic rock band from the 60's to the early 80's. All you have to do is name the band.

Quiz Answer Key and Fun Facts
1. This classic rock band had hits such as "Sympathy for the Devil" and "Satisfaction". Although they were usually stoned during their early concerts, they've cleaned themselves up quite a bit and are now playing clean shows. Who are they?

During Rolling Stones concerts, Mick Jagger always loved to preen around the stage, especially to what fans arguably call their greatest hit yet- "Sympathy for the Devil". Other fan favorites include "Let's Spend the Night Together" and "Jumpin' Jack Flash".
2. This late 70's-early 80's classic rock band played the "Monsters of Rock" concert at Castle Donington in 1991, and released a DVD of the show. During this band's performances, items you may see on stage include a giant bell, a humongous inflatable woman and a Gibson SG. Name the band.

AC/DC hits include "Back in Black", "You Shook Me All Night Long", and "Highway to Hell". Their singer for three years, Bon Scott, tragically passed away in February of 1980 from excessive drinking, and was replaced with Brian Johnson for their smash comeback album- "Back in Black". Other albums include "The Razor's Edge" and "High Voltage".
3. This rock band was formed in the 60s in Canada. Two of its members had played together all throughout high school. Their drummer, Neil Peart, wrote all of their lyrics, and the lead guitarist and bassist (who also sings) contribute with the music. Some hits include "Spirit of Radio" and "Fly by Night". Can you name the band?

Rush's drummer, Neil Peart, was said to have been one of the best drummers in the world. He beat out strong and bouncy rhythms and wrote the band's lyrics for all of their albums except for the band's first album, which included John Rutsey, not Peart. Geddy Lee sings for the band, plays bass guitar, bass pedals, and all synthesizers.
4. This band released one of the best albums in classic rock history in the 1970's. It contained hits like "Us and Them", "Brain Damage", and "Time". One of this band's other albums, "The Wall", was made into a movie in 1982 and starred Bob Geldof as the main character who goes through several events that lead to mental isolation. Name the band.

Pink Floyd has released albums such as "The Wall", "Animals", and the classic rock smash "Dark Side of the Moon". "Pink Floyd: The Wall" was released in 1982, and contained most of the original concept album's music, along with some other Floyd originals.
5. One of this group's concept albums was made into a movie. This one depicted a boy shutting himself out from the world mentally. This band's singles include "Baba O' Riley", "My Generation", and "Won't Get Fooled Again". Who are they?

The Who originated in Britain, and broke many things in their rock reign: guitars, drums, barriers, and eardrums. Their loud but catchy music invaded the United States with a strong force. The two most popular Who albums are "Who's Next", containing hits like "Baba O' Riley", "Won't Get Fooled Again", and "Bargain"; and "Tommy", the concept album described above, which gave the band their biggest hit- "Pinball Wizard".
6. Members of this band include Steven Tyler and Joe Perry. They appeared on the "Saturday Night Live" skit "Wayne's World" once, and sung the "Wayne's World" theme song with Wayne and Garth. This is the band that Wayne and Garth also went to see in concert in "Wayne's World 2" where they performed "Dude Looks Like a Lady". What is the band's name?

Aerosmith have released albums like "Get a Grip", "Pump", and "Just Push Play". The guitarist, Joe Perry has a solo career that soars just as much as the band's first album (which was titled "Aerosmith") did. Later, they would release "Get Your Wings" and "Permanent Vacation", among others.
7. This band has a habit of either recording very short songs, or very long songs. Out of the four members, three have had solo careers. Arguably, this band's greatest hit is "Stairway to Heaven". What is the band's name?

This band's name came from The Who's Keith Moon, who claimed the band would "go over like a lead zeppelin". The band ended up doing the complete opposite, and have released hits like "The Immigrant Song", "Black Dog", and "Rock and Roll".
8. The lead singer of this band also wrote some of the band's lyrics, and is considered by many to be 'an American poet'. Their hits include "Light my Fire", "LA Woman", and "Break on Through (To the Other Side)". Name the band.

Jim Morrison, who is by all means an American poet, released some of the most classic-type rock music of the 60's. He tragically passed away from a heart attack.
9. One of the most dysfunctional bands of the classic rock era would be this one, containing members such as Slash and Axl Rose. Rose was often late for concerts or never showed, and most of the members of the band had excessive problems associated with drugs or alcohol. The band split in 1996 after the guitarist left, but few of the members are still in a band today. Name the band that released hits of the 80's like "Paradise City" and "Mr. Brownstone".

William Bruce Bailey, better known as Axl Rose, was never on time for concerts and could never be depended on. The whole band had problems with alcohol at some time, and drama backstage caused Slash to leave in 1996. Slash and some other members of GnR formed their own band, Velvet Revolver, and are doing quite well. GnR once recorded a whole album of covers they did on other rock songs, and called it "The Spaghetti Incident?".
10. This artist was too poor to afford a left handed Fender Stratocaster, so he played a right handed one upside-down! Although he lived a short life due to drugs, this artist played hits like "Hey Joe", "Purple Haze" and even managed to cover "The Star Spangled Banner"! Name the artist or band. 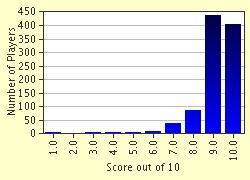 
Other Destinations
Explore Other Quizzes by cameronfry2291