Do You Know Facts About The Foo Fighters? Quiz

This quiz is about the band Foo Fighters. I love them and hope you enjoy this in depth quiz.

Quiz Answer Key and Fun Facts
1. How many albums did the band's original drummer, William Goldsmith, appear on?

Only one. Dave Grohl [Foo's frontman] recorded the first Foo Fighters record basically by himself. He, at the very least recorded the drum, vocal, and guitar tracks on his own. For the next record, William recorded the drum tracks but Dave secretly redid most of them because he was not satisfied with Goldsmith's work. Due to Dave redoing the tracks, William quit the band.
2. Who replaced Pat Smear when he quit the band?

When Pat Smear announced that he was leaving the band, Dave Grohl asked his friend and former Scream bandmate, Franz Stahl, to take his place. Pat agreed to tour with the band until Stahl was ready to take over. Franz replaced Smear on the top of Radio City Music Hall at the MTV Music Awards.
3. What is the original line up for the Foo Fighters?

Dave Grohl, William Goldsmith, Pat Smear, and Nate Mendel is the original line up for the Foo's. Even though every individual listed above has been in the band, they are not original.
4. Who are/is the remaining member(s) of the band that has not quit at one point or another.

All of the members of the Foo Fighters (that are original) have quit except for Dave Grohl. Pat Smear quit and returned in 2011. Taylor Hawkins joined the band in 1997/1998. Nate Mendel called Dave Grohl one night and quit, then thought about his decision, and called Grohl back the next morning and rejoined the band.
5. What is the only video to have replacement for Pat Smear, Franz Stahl in it?

Franz Stahl only appeared in one Foo Fighters video, "My Hero". Franz didn't actually play on the recording of the song, but was still in the video. He was never actually on a record with the band, he toured but him and Dave couldn't agree as songwriters, so Franz was fired.
6. Who sings lead vocals on the song, "Cold Day In The Sun"?

"Cold Day In The Sun" is a song of the bands album "In Your Honor". Taylor sings the song from his drum set when the song is played live.
7. A former bandmate from Dave Grohl's past with a certain grunge band came to help with the recording of a song from the Foo's 2011 album, "Wasting Light". Who was it?

Krist Novoselic who was formerly in Nirvana with Grohl, played bass on the song "I Should Have Known".
8. What year did the Foo Fighters form?

Though the recording for the bands first album began in late 1994, a band was not recruited until 1995. The first record was recorded solely by the Foo's frontman, Dave Grohl. It wasn't until he had to tour to support the album that he formed an actual band.
9. What was the title of the Foo Fighter's 2002 album?


Answer: One By One

"One By One" is the title of the Foo's 2002 album and the lead single for the album was "All My Life". At the time of the album's release it was considered, the band's heavieset album.
10. Who replaced Franz Stahl when he was fired?

Chris Shiflett replaced Franz Stahl and has been with the band ever since. Dave Grohl said that during tryouts for a guitarist to replace Stahl that Shiflett was the only one that sang.
Source: Author GrohlCobain 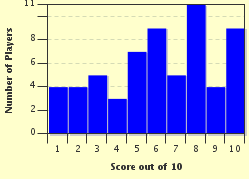 
Other Destinations
Explore Other Quizzes by GrohlCobain