There Is Nothing Left To Lose Trivia Quiz

For questions 1-11, you'll be asked to finish the lyric. The remaining questions will be about the music videos to their 3 hit singles from the album and some basic information.

(From 'Breakout') The album is copyrighted under RCA and Roswell Records.
3. "Run and tell all of the _____, this could take all night."

(From 'Generator') The album is an enhanced CD, where you can look at photos and watch the 'Learn To Fly' music video.
6. "And you dream about yourself. And you _____ and breathe the air."

(From 'Aurora') The album was produced by Adam Kasper and the Foo Fighters.
7. "Take your payroll, and your _____. There's a place I know, there's a robbery."

(From 'Live-In Skin') The front cover of the album has a picture of a tattoo of the Foo Fighters logo on a man's neck.
8. "Into the night we _____, lighting the way we glide by."

(From 'Next Year') The pictures on the inside of the album show Dave Grohl singing and playing the guitar, Taylor Hawkins playing the drums, and Nate Mendel playing the bass behind sliding glass doors.
9. "As long as I can fight, I'll _____."

'There Is Nothing Left To Lose' was released in 1999, which was two years after their previous album, 'The Colour And The Shape'.
13. What does Taylor Hawkins squirt on Dave Grohl's shirt in the 'Breakout' video?

Taylor squirts mustard all over Dave's shirt while he's in line getting popcorn.
14. What character does Dave Grohl NOT play in the 'Learn To Fly' video?


Answer: One of the two janitors

Two people from Tenacious D are the janitors.
15. What occupation do the band members have in the 'Next Year' video?

They go to the moon as astronauts in the video.
Source: Author Grohl_Is_Sexy 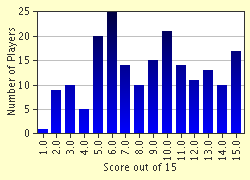 
Other Destinations
Explore Other Quizzes by Grohl_Is_Sexy