Foo Fighters are a great and one of the most influential bands in rock history. This is just a ten question quiz, dedicated to their talent.

Quiz Answer Key and Fun Facts
1. Foo Fighters formed in 1994, after the break-up of Dave Grohl's last band. What is the name of the band that he was previously in?

Nirvana formed in 1987 in Aberdeen, Washington, US. Dave was in the band until lead singer Kurt Cobain sadly committed suicide. Dave then went on to form Foo Fighters and the rest is history!
2. There are four members in the band: Dave Grohl, Taylor Hawkins, Chris Shiflett and whom?

Probot featured such guests as Lemmy, Max Cavalera, Mike Dean, Eric Wagner and King Diamond. Their first album was released in 2004.
5. What is the middle name of lead singer, Dave Grohl?

Dave was born as David Eric Grohl on January 14th, 1969. Dave Grohl attended Thomas Jefferson High School, named after the third president of the United States.
6. Since the formation of Foo Fighters, they have won several Grammy awards. What music video did they get their first Grammy for?

"Learn To Fly" is a video with the Foo Fighters, minus Chris Shiflett, on a plane and "Stacked Actors" was never made into a video.
7. In the "Everlong" music video, what does it say on Taylor's sweater?


Answer: "Save The Whales"

The "Everlong" music video was directed by Michel Gondry.

At the start of the music video, it shows two men heading towards a house. Dave Grohl's character portrayed in the video dreams about a punk rock party, with Taylor Hawkins dressed as a woman; they see two "Teddy Boys" which are played by Nate Mendel and former member Pat Smear.

The video then switches over to Taylor Hawkins' dream where she is on her own in a house in a dark house in the middle of a forest. Taylor has pigtails and is wearing the "Save The Whales" sweater, then a hand reaches out and from underneath the floorboards which leaves Taylor frightened.

At the end of the video, Taylor and Dave are in bed and the two "Teddy Boys" get out of their clothes and the whole band finish playing the song together.
8. What was the first single released on their 2005 album release "In Your Honor"?


Answer: Best Of You

The music video for "Best Of You" was directed by Mark Pellington, better known for his work on the Pearl Jam video "Jeremy".
9. There is a video for the "For All The Cows" song.

There actually was an idea for "For All The Cows" becoming a video, but the band scrapped the idea.
10. Which Foo Fighters' song do the following lyrics come from? "You make me dizzy running circles in my head One of these days I'll chase you down Well look who's going crazy now We're face to face my friend Better get out Better get out"

"Breakout" was released on Foo Fighters' 1999 album, "There is Nothing left to lose".
Source: Author runaway_drive 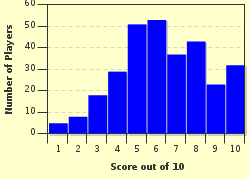 
Other Destinations
Explore Other Quizzes by runaway_drive