The Music Videos of the Foo Fighters Quiz

Quiz Answer Key and Fun Facts
1. In what music video does the band do a performance on top of a building intercut with different images showing pain and anger?

The director of this music video, Mark Pellington, was inspired for the imagery due to the recent death of his wife.
2. In this music video, the band eats in a sushi restaurant where they run into an Asian man who looks similar to Dave Grohl. The band also performs near a lighthouse. What music video is this?

The director of this music video also directed "DOA" for them. There is a visual callback with the vial of red liquid during Dave's daydream.
3. In this music video, Dave and Taylor are a couple who go through some horrific dreams of being attacked by Nate and Pat as Teddy Boys. What music video is this?

Michel Gondry, the music video director, came up with a lot of the visual images most notably when Dave's hand gets huge so he can attack Pat and Nate. According to Gondry, his hand swelling often pops up in his dreams.
4. In this music video, the band promotes a new kind of candy, Footos. What music video is this?

Parodying the famous Mentos commercials, the video starts off the trend of the Foo Fighters video that is really funny.
5. In this video, the band are astronauts going to the moon. Hi-jinx ensue in what music video?

This song is now known as being the theme song for the comedy "Ed". The music video relies a lot on stock footage and CGI to insert the band as being astronauts in the sixties.
6. In what music video does the band act as actors on a soap opera in the seventies?

Rashida Jones plays the love interest for Dave Grohl. There is also a little seen performance video of just the band in their seventies gear. But, thankfully, they just decided to release the soap opera version instead.
7. The band goes to a performance arts school similar to the one in "Fame" in what video?

This music video shows a lot of footage from "Orange County" the movie that features this song and stars Dave's friend Jack Black. This song also is one of the few Foo Fighters songs that hasn't appeared on a Foo Fighters album.
8. In what video does the band perform on a rotating platform in color, and act on a train in black and white?

The band has reported that the rotating platform scared them. The floating microphone also proved to be a problem when it hit Dave in the face, earning him a black eye. You can still see in the official music video towards the end.
9. In what video do Lester and Cole participate in a wild night at a hotel which includes beer, adult entertainment, and cross-dressing?

Cole is played by Jack Black, making his third appearance in a Foo Fighters video. Due to the subject matter, this was banned on MTV in America.
10. What music video features the band saving the day?

I had to include this video. The band won their first Grammy for the music video which includes the band playing multiple roles including themselves, Tenacious D as bumbling employees, and a plot ripped from "Airplane!" In essence, one of the greatest music videos!
Source: Author mohistory88 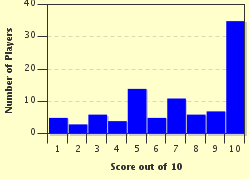 
Other Destinations
Explore Other Quizzes by mohistory88