"One By One" Lyrics Trivia Quiz

"One by One" is the Foo Fighter's fourth album. I will give you a lyric and you tell me what song it's from.

Quiz Answer Key and Fun Facts
1. "Say your prayers when you get scared."

Two covers of "One By One" were released. One was black with a white heart, while the other was white with a black heart. They were both drawn by artist Raymond Pettibon.
2. "We're going life or death, two strangers on the mend."

"One By One" was the first CD that guitarist Chris Shiflett recorded with the group, although he has been a member of the group since 1999 when he replaced Franz Stahl.
3. "The same old superstitions haunt us now and then."

The Foo Fighters took their name from unidentified flying objects seen during World War II. Near the end of the war, US Air Forces saw balls of light in German airspace. These glowing balls were thought to be a German secret weapon, however the Germans were just as confused.
4. "Sick and uninspired by the diamonds in your fire."


Answer: Tired of You

This ballad features the guitar work of Queen's Brian May.
5. "Winding through this maze you hold me in."


Answer: Have It All


Answer: All My Life

This was the first single off of "One by One". It was nominated for two Grammys at the 45th Grammy Awards. The first was for Best Rock Song, which is a songwriter's award, and the second was for Best Hard Rock Performance, which they won.
7. "I'll be your new one to pass through."

"Low" was the third single off of "One By One". The video featuring Jack Black was pulled from MTV as it was considered to be too controversial.
8. "Do I stay or run away and leave it all behind?"

This was the second single off of the CD. "Times Like These" was nominated for the 2003 Grammy for Best Rock Performance By A Duo or Group With Vocal. At the 2003 Grammy's the Foo Fighters performed this track with accomplished pianist Chick Corea.
9. "Wake up you're dreaming, I can't stand your screaming."


Answer: Lonely As You

In February 2000, the Foo Fighters performed on "The Late Show with David Letterman" on his first show back after heart surgery. Dave proclaimed that they were his favourite band.
10. "Whispering to pass the time, whisper for the days gone by."

The Foo Fighters set up a special website that is only accessible through the "One By One" CD. To access this site go to www.foofightersbonus.com with your CD in your computer's CD-ROM drive. Special bonus features will then be unlocked.
Source: Author Elmo1609 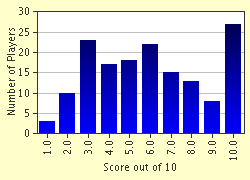 
Other Destinations
Explore Other Quizzes by Elmo1609