This is my third Van Halen quiz and there will be plenty more to come! This one will focus on 1981 to 1984.

Quiz Answer Key and Fun Facts
1. On Van Halen's tours, what colour of M&Ms did they request be taken out of the bowl?

Van Halen would make sure that the venue owners read the contracts carefully by putting these weird little additions into their contracts. The boys believed that if they remembered the M&Ms, they would remember to get the right amount of equipment for the sound system and the lighting. If they band showed up and there was brown M&Ms in the bowl, they would completely destroy the backstage area.
2. Which song contains the lyrics "I don't wanna, baby I don't wanna"


Answer: Hear About it Later

This song contains Ed's signature "Unchained" sound on his flanger. A flanger is something that creates a kind of whooshing sound in the background of the guitar. "Hear About it Later" is featured on the 1981 album "Fair Warning" and contains a blistering guitar solo but was originally written on keyboard.
3. Which song features the saying "pins and needles" in its lyrics?


Answer: So this is Love?

This song was a concert staple for many years. It is comprised of four different guitar solos that were made in one take. Talk about skill, Eddie's got it! It was the only song off of the "Fair Warning" album that was released as a single but didn't even crack the Billboard top 40. I don't see how this is possible considering how this song is so good.

As a matter of fact I believe that if you own this album....you go put it on right now and listen to this tune because it is so good!
4. Which of these statements about "Fair Warning" is true?

Honestly, Warner Bros. had a reason to be worried about the success of this album. This album had none of the "pop" hits that the rest of the albums had. It never had a hit single, and the band made this album while they were all ticked off at each other.

The album did crack the Billboard charts; it even made it to number six in the U.S.A. And there are a couple of Van Halen albums that they did with Sammy that sold less than the 3.4 million that "Fair Warning" sold.
5. Which one of these songs did Ed write for his wife, Valerie Bertinelli?

"Sunday Afternoon in the Park" was written for Valerie before their wedding. This song was played when they got married in the early 80s and also began Michael Anthony's bass solos on the 1991-92 tour.
6. How many cover songs were featured on the "Diver Down" album?

This album is frowned upon with all of the members of Van Halen with the exception of Dave. According to "Van Halen: The Early Years", Dave and Ted Templeman wanted to look for a hit single and Alex and Mike claimed numerous times that covers like "Dancing in the Street" were not even Van Halen.
7. Which song off of the "Diver Down" album was originally considered for the "Van Halen" album?

I've read a few books that Malcolm Dome has written about Van Halen. He is very critical on the work of the guitars on the songs. In his book "Eddie Van Halen: Know the Man, Play the Music" he actually says that the guitar solo in this song was "blistering". That's an accomplishment to get Malcolm Dome to say that, well in my eyes anyways.
8. Which song did Ed use a 1961 Fender Stratocaster on?

This 1 minute, 20 second guitar showcase displays Ed's creativity. He uses echo effects and chorus effects to create a mesmerizing of the wall beauty. By hammering on chords and turning the volume knob on and off simultaneously, Eddie creates a really cool and unique sound.
9. Which two songs off of "Diver Down" were released as singles?


Answer: "(Oh) Pretty Woman" and "Dancing in the Street"

The funny part about "(Oh) Pretty Woman" is that the boys actually forgot to include a whole verse in the song but it went unnoticed and it came out fine. On the other hand, "Dancing in the Street" is hated among the band members. Alex Van Halen even said on "Van Halen: The Early Years", "that's not Van Halen".
10. "Diver Down" sold more copies than "Fair Warning".

"Diver Down" was a worse album than "Fair Warning"(according to the critics and the band [except Dave]), but it did sell 4 million copies as opposed to "Fair Warning", which sold 3.4 million copies.
11. Drifting away from the albums; what kind of pickup did Ed use in his first "Frankenstein" guitar?

Eddie enjoyed the sound of Gibson guitars but hated the fact of their stop-tail bridge (no whammy-bar). So Ed put two and two together by sticking a Gibson P90 pickup off of his Gibson ES-335 and stuck it on his Fender Stratocastor and BAM! You have the "Frankenstein" creation we all know as the "Frankenstrat"
12. Which song off "Diver Down" was 100% improvised?

"Intruder" is mostly the sound of Ed rubbing a beer can up and down the strings. This was actually made for the beginning of the "(Oh)Pretty Woman" video and then they decided to put it on the album.
13. Who requested that Jan Van Halen play clarinet on "Big Bad Bill (Is Sweet William Now)"?

This song was more of a Dave song because of the jazz roots that it brought to the table. Growing up, Dave's old band, Red Ball Jet was more of a jazz based band, so it was only a matter of time before songs like this ended up on Van Halen records.
14. On what date was the album "1984" released in the USA?

This album was so successful it was ridiculous. It had three top 15 singles, including a number one hit in "Jump". This feat was so huge because this was around the time that "Thriller" was released and Van Halen had topped it with "Jump". These statistics are all referring to the U.S Billboard Charts.
15. "Hot for Teacher" reached the top 15 on the Billboard Top 40 in the U.S.A.

This is pretty surprising huh? This song is probably one of Van Halen's most popular tunes. Although it didn't have as much success on the charts as others did, it did rack up respect in the music video department due to Van Halen's creative video for "Hot For Teacher" with Phil Hartman providing the voice for Waldo.
16. Which one of these songs is about a Calvin Klein underwear model?

This was one of the songs off "1984" that did make it into the top 15 on the Billboard top 40. A song known by the people that have followed VH through the years but unknown to new listeners. Being an instant classic, "I'll Wait" is definitely Van Halen in their prime.
17. Which one of these songs was one of the first written by the Ed man himself?

This song was originally on the four song demo that the boys made with Gene Simmons in 1976 but was then put off of the albums until "1984" because of the insistence of Alex Van Halen. The lyrics and music are fairly different from the original version.
18. Which one of the riffs of these songs was originally hummed in a cassette recorder because Ed didn't want to wake up his wife?

This song was thought upon during the boys' tour in South America in the year of 1983. Ed lying in bed and thought of the riff to "Girl Gone Bad". Van Halen actually premiered this song as an instrumental at the US Festival, but thankfully, the great song we all know today as "Girl Gone Bad" had lyrics added to it for "1984".
19. What song off of "1984" was originally over 30 minutes long?

If I may speak for others, this song may have been a bit boring if it went on for thirty minutes. But because of Ed's ability to pick things up, he shortened it to just over one minute and honestly, it sounds pretty good. The name of this song actually came from Ed's wife Valerie Bertinelli.
20. Who was Dave's first guitarist in his solo band?

In conclusion of this answer, Dave needed someone that would fill the shoes of Edward Van Halen; which is an impossible task. He did acquire a very talented guitarist in the ways of Steve Vai. Dave did get Jason Becker who definitely could have made an impact in the guitar world. But Jason, only one month into playing with Dave, acquired Lou Gehrig disease and became unable to use his limbs. My best wishes go to Jason because he is one superb human being.


So there you have it, Van Halen's early years completely finished. Watch out for more Van Halen quizzes as me, the teen fanatic of Van Halen takes you on the roller coaster ride of the next 11 years in Van Halen's history.
Source: Author evh 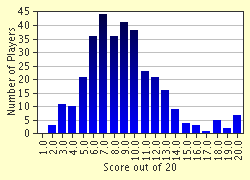