Another quiz on the best British band of all time in my opinion. Name the song the lyrics are from.

Quiz Answer Key and Fun Facts
1. From which Iron Maiden song would you hear the following lyric: "When you're walking down the street everybody stops and turns to stare, at you!"?

This song is from the album "The Number of the Beast" and is a sequel to the song "Charlotte the Harlot" which appears on the debut album "Iron Maiden".
2. "Let me tell you a story to chill the bones, 'bout a thing that I saw, one night wandering in the everglades, had one drink but no more" What song are these lyrics from?

This song is from the album "Dance of Death" and is one of the longest songs Maiden have written.
3. "Honey, it's getting close to midnight, and all the myths are still in town" Name this song.


Answer: Bring Your Daughter to the Slaughter

This is from the album "No Prayer for the Dying" and is one of the few songs written by vocalist Bruce Dickinson alone and was released as a single.
4. From which song is this lyric from : "Living on a razor's edge, balancing on a ledge"?


Answer: The Evil That Men Do

From the album "Seventh Son Of A Seventh Son". Often when played live Bruce Dickinson would recite the line "The good that men do, is oft interred with their bones, but the evil that men do lives on" from Shakespeare's "Juliet Cesear" to introduce it.
5. "Suffering evil when you pay the price of fame, there is no god to save you, if you don't save yourself, you can't blame a madman if you go insane, give me the strength so I carry on" What song is this excerpt from?

From Maiden's album "Dance of Death". A weird song but pretty awesome.
6. What song is this from : "In a foreign field he lay, lonely soldier unknown grave"?

Another song from Maiden's album "Dance of Death". This song runs for a whole 10 minutes when played live.
7. "See, what's ruining all our lives, see, what's pulling strings" Name the song these lyrics are from.


Answer: Be Quick or Be Dead

This is a weird song from the "Fear of the Dark" album, listen to the lyrics, they're pretty odd.
8. From which Maiden song would you here this? : "She fell in love with his greasy machine, she leaned over wiped his kickstand clean, she'd never seen the beast before, but she kept on crying him more more more"?


Answer: From Here to Eternity

This is another song from the "Fear of the Dark" album and to be honest I really don't know what it's about.
9. "Questions are a burden, an answers are quicker than ones self, shellshock in the kitchen, tables overturned" What song are these lyrics from?


Answer: Back in the Village

From the "Powerslave" album, not very well known but one of my favourite songs on it.
10. "'Cause at five o-clock, they take me to the gallows, the sands of time, for me, are running, low" And finally, what song is this from?


Answer: Hallowed Be Thy Name

A classic Maiden song, every Maiden fan shouldve got that. Well that's it. Thanks for playing!
Source: Author Daniel_k15

This quiz was reviewed by FunTrivia editor Bruyere before going online.
Any errors found in FunTrivia content are routinely corrected through our feedback system.
Most Recent Scores
Jan 04 2023 : i_rdrz: 10/10
Dec 23 2022 : Guest 98: 10/10 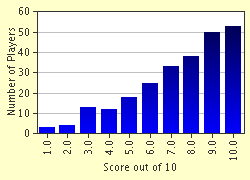 
Other Destinations
Explore Other Quizzes by Daniel_k15