This is the second of a set of Rush Album related quizzes I aim to complete. This will probably be a little easier than the Vapor Trails quiz, but I hope you enjoy it all the same!

Quiz Answer Key and Fun Facts
1. Which song does the line, "It's a hopeless situation, lie awake for half the night," come from?


Answer: The Color of Right

If you voted "Limbo", you obviously forgot that "Limbo" doesn't contain any sung lyrics at all!
2. How many times does the phrase "Half the World" get used in the song of the same name?

On counting how many times the phrase gets used, I found that the word 'half' gets used around 40 times!
3. Odd One Out: Which of the following four songs features on "Test for Echo"?

The other songs are from:

Second Nature - "Hold Your Fire"
Grand Designs - "Power Windows"
Double Agent - "Counterparts"
4. Which track off "Test for Echo" did Rush feature in their video where two men are seen to be racing each other around a futuristic landscape?

It's a fantastic video which lends a look from Bladerunner and the Mad Max series.
5. Which is the shortest song on the album?


Answer: Half the World

The shortest song and also the most repetitive!
6. The song "Limbo" features an extract from the song 'Monster Mash'

And to clarify what is said:

"Whatever happened to my Transylvania Twist?"
7. On which Rush song does Alex Lifeson play the mandolin?


Answer: Half the World

Only one of two times that Lifeson has played the mandolin on a Rush album.
8. How many songs are featured on "Test for Echo"?

This is amongst Rush's few albums with more than 10 tracks
9. How many songs off "Test for Echo" ended up with videos?

The songs given the video treatment were:

Test for Echo
Driven
Half the World
10. The song "Totem" features which line of lyrics?

"Totem" is a song which deals with gods of different cultures.
11. Which household appliances have become a staple feature of Rush's live shows since the "Test For Echo" tour?

Rush have never fully explained the reason behind the appearances of the dryers, just that they thought it'd be cool to have something like that on stage.
12. Which is the correct track order for the first 4 songs?


Answer: Test For Echo, Driven, Half the World, The Color of Right

No real point to this question except a test to see just how well you know "Test for Echo".
13. Which of the following from "Test for Echo" has never been performed live by Rush?

'Resist' is a very popular song for Rush to perform live, usually preceded with a joke by Geddy Lee about how it is a song about the country of Scotland.
14. In what year was "Test For Echo" released?

After this release, Rush fans would have to endure a 6 year wait before Rush would release another studio album.
15. Neil Peart wrote the lyrics for every song on the album.

As usual, Mr. Peart wrote every song's lyrics on this album. But as one of the questions further ahead point out, he didn't write them all by himself.
16. Which song features the line "Nail-biting hood boys in borrowed ties and jackets"?

The song "Test For Echo" went on to become a concert opener for Rush during their 'Test For Echo' tour in 1996.
17. July 12th, 2002 - the 'Vapor Trails' tour is in full swing and Geddy Lee announces that the group would like to do something completely different for the fans. Which song from "Test For Echo" did Rush perform acoustically?

This question should have been easy considering "Resist" is the only song of the four which features an acoustic section in its studio version.
18. True or False - The song "Virtuality" is about the internet.

Probably the easiest question of the quiz!
19. Which of the following 4 words fit into the blank space for this line from the song "Dog Years": "Dog years, with every .... it reappears"

I tried to confuse you with the possible terms for a dog, but if you know the song you should know the answer to this relatively easy question.
20. Neil Peart co-wrote some of the music for "Test For Echo" with Lee and Lifeson

Rush have a unique partnership which involves Peart writing the lyrics, and Lee and Lifeson writing the music. Very rarely does the partnership criss-cross over.
21. What did the cover of "Test for Echo" depict?


Answer: A stone figure with little people stood about it

I go crazy when I do one of these album cover questions! Sometimes my incorrect answers aren't TOO bad tho. :P
22. The tracklist order changes between the US and UK versions of "Test for Echo"

Unlike the most recent album 'Vapor Trails', there is no change in track listings between the US and UK versions.
23. The following line features in which "Test for Echo" song: "I can learn to compromise, anything but my desire."

A very popular song amongst Rush songs, so it shouldn't have been a difficult question.
24. The song "Test For Echo" is the album's longest track at a hefty 6:13?

Rush albums usually only have one instrumental.
Source: Author auto2112

This quiz was reviewed by FunTrivia editor Bruyere before going online.
Any errors found in FunTrivia content are routinely corrected through our feedback system.
Most Recent Scores
Dec 31 2022 : Guest 67: 15/25
Dec 18 2022 : Guest 24: 15/25 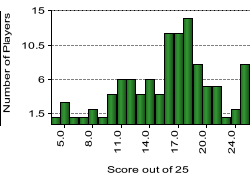 
Other Destinations
Explore Other Quizzes by auto2112