Songs To Cry A River By Trivia Quiz

These are songs to cry a river by. For some, they cause a tear or two to come to the eye. I give you some lyrics, and you guess what the song is.

Share on Facebook
Share on Twitter
Share by E-Mail
Author
sunshine7
Time
4 mins
Type
Multiple Choice
Quiz #
90,555
Updated
Dec 03 21
# Qns
10
Difficulty
Average
Avg Score
6 / 10
Plays
2579
This quiz has 2 formats: you can play it as a or as shown below.
Scroll down to the bottom for the answer key.

Quiz Answer Key and Fun Facts
1. "...gave proof through the night that our flag was still there."

This question is a giveaway. The music to this song is taken from a well known drinking song called "To Anacreon in Heaven." Francis Scott Key wrote new words to celebrate America's victory over the British.

(The song is "Star Spangled Banner," with lyrics written by Francis Scott Key. Scott Key wrote the lyrics September 20, 1814, the night of the U.S. colonialists' battle against the British at Fort McHenry. This song is sung by citizens of the United States.)
2. "The old gray goose is dead."

If you make a room full of kindergarden students sing this song and probably one, maybe even two or more, will mourn the demise of the goose.

(The title to this song is "Go Tell Aunt Rody," a very, very old children's song whose author is unknown.)
3. "Two days later papa passed away and I became a man that day. Everyday I had to work the fields 'cause that's the only way we got our meals..." (This is the 1970 song, not the one from 1962 of the same title.)

This is a song bemoaning the trials of a boy named Patches.

(The song title is "Patches." The lyrics are written by Ronnie Dunbar and it was sung by Clarence Carter and also B.B. King. There is another song with the same title but different lyrics sung by Dickie Lee in 1962.)
4. "I came home unexpectedly, and caught her crying needlessly in the middle of the day. And it was in the early spring, when flowers bloom and robins sing, she went away..."

This song is about a woman named Honey, who passed away.

(The song is named "Honey." The lyrics were written by Bobby Russell and it was made a hit by Bobby Goldsboro.)
5. "Baby cried the day the circus came to town, 'cause she didn't want parades just passin' by her. So she painted on a smile and took up with some clown, while she danced without a net upon the wire..."

If she hasn't fallen yet, then just wait for the refrain.

(The song title is "Don't Cry Out Loud." The lyrics are written by Carol Bayer Sanger and the music was written by Peter Allen. Melissa Manchester made this song a hit in 1978.)
6. "Don'tcha draw the Queen of Diamonds, boy, 'cause she'll beat you if she's able. You know the Queen of Hearts is always your best bet..."

Sometimes playing a card game is not so simple and has a deeper meaning.

(This song is "Desperado." It was made a hit by the group The Eagles, and can be found on their album "Hell Freezes Over.")
7. "Everytime I hear a newborn baby cry, or touch a leaf or see the sky, then I know why..."

This song is about the mystery of faith.


Answer: "Wind Beneath My Wings"

This song is heard many times on the radio during trying times.

(The song title is "Wind Beneath My Wings." The song lyrics were written by L. Henley, and J. Silbar. Bette Midler made this song a hit.)
9. "And now, I do believe, that even in a storm we'll find some light. Knowing you're beside me, I'm all right..."


Answer: "Looking Through The Eyes of Love (Theme From Ice Castle)"

The song is about the wonder of love.

(The song title is "Looking Through The Eyes of Love." It was made a hit by Melissa Manchester in 1980.)
10. "Should auld acquaintance be forgot, and never brought to mind..."

This question is a giveaway.

(You know this song as "Auld Lang Syne." It was written by Robert Burns in 1796 and is sung by everyone.)
Source: Author sunshine7 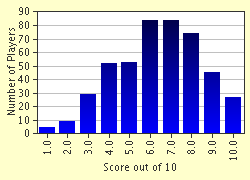 
Other Destinations
Explore Other Quizzes by sunshine7