This is my first quiz on the mighty Van Halen! I hope you enjoy playing it and all feedback is welcomed.

Share on Facebook
Share on Twitter
Share by E-Mail
Author
fronkenstein
Time
5 mins
Type
Multiple Choice
Quiz #
280,944
Updated
Dec 03 21
# Qns
10
Difficulty
Difficult
Avg Score
5 / 10
Plays
917
This quiz has 2 formats: you can play it as a or as shown below.
Scroll down to the bottom for the answer key.

Quiz Answer Key and Fun Facts
1. When Van Halen was inducted into the Rock and Roll Hall of Fame in March 2007, what band/artist gave the induction speech?

Michael Anthony was the only original band member to attend the ceremony. Edward Van Halen had entered a rehab facility for treatment of alcoholism.
2. Who is the bass player for Van Halen beginning in 2006?

Nathan Roth was an eye surgeon. His successful medical practice allowed him to buy a house with a basement large enough to become one of Van Halen's first rehearsal areas. Van Halen wrote several of their first songs in that basement.
4. What was the first city that Van Halen played live outside of California?

Van Halen's first performance of their 1978 world tour was at the Aargon Ballroom in Chicago, IL. They began the tour as an opening act for only three weeks but because of their huge success, ended up touring for nine months, from March until December 1978.
5. What was the only song that Van Halen's father Jan played on?

Eddie and Valerie met for the first time on August 29, 1980 at the Hirsh Memorial Arena in Shreveport, Louisiana. They met backstage after the Van Halen concert.
7. Michael Anthony played what instrument in his high school marching band?

Michael later became interested in guitar, and then bass guitar. He decided to become a bass player after seeing the bass player of Blue Cheer on an album cover.
8. Alex Van Halen played what instrument on the movie soundtrack "Twister"?

Alex played keyboards on the song "Respect the Wind" with his brother Eddie on guitar. Van Halen also recorded the song "Humans Being" for the film.
9. What song was Van Halen's first #1 hit on the US Billboard Singles chart?

"Jump" entered the Billboard charts at #1 on February 25, 1984 and stayed there for five weeks. It was also the only single that Van Halen ever had that reached #1.
10. Who played the teacher in the Van Halen video "Hot For Teaccher"?

Comedian Phil Hartman was the voice of Waldo in the video. Donna Rupert (runner up in the 1981 Miss Canada pageant), who plays the chemistry teacher, and Lillian Müller, who plays the Phys Ed teacher. Both teachers tear off their dresses to reveal a bikini, to the cheers of the st
Source: Author fronkenstein

This quiz was reviewed by FunTrivia editor ertrum before going online.
Any errors found in FunTrivia content are routinely corrected through our feedback system.
Most Recent Scores
Jan 19 2023 : Guest 68: 5/10
Dec 16 2022 : Guest 68: 2/10 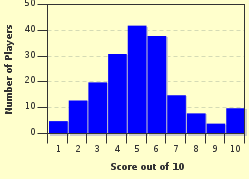 
Other Destinations
Explore Other Quizzes by fronkenstein