This is the next part to the set of my quizzes about Van Halen. This will focus on songs and trivia from 1978 and 1980.

Quiz Answer Key and Fun Facts
1. Who was David Lee Roth's inspiration to become one of the greatest frontmen of all time?

None of these great singers were Dave's inspiration. According to Dave, his inspiration was Eddie Van Halen himself. Dave went and saw Eddie Van Halen and saw all the energy and became inspired. On the DVD, "Van Halen: The Early Days" Dave said, "You know what he does with his hands, I wanna do with my feet, I wanna do with my voice, he was kind of a mentor".
2. According to the book "Van Halen 101", which song did Eddie show to his buddies from the band Angel, and almost get copied before they released the album "Van Halen"?


Answer: You Really Got Me

Eddie showed this album to a lot of people, that is the reason "You Really Got Me" was released as a single in the first place. Van Halen had to get it out before Angel could.
3. Name the song that contains the lyrics "I can't wait, I can't wait!"

This song was featured on "Van Halen". This album eventually went on to become a diamond seller internationally. Lots of Eddie's early songs were about girls. As you can see, as he got older, he got more innovative
4. Which one of these songs WAS NOT written before Van Halen released their self titled debut album?


Answer: Light Up the Sky

"Light up the Sky" was written on the tour with Black Sabbath that got them really noticed. The other three songs happened to be on a very rare demo that they made with Gene Simmons in the mid 70s.
5. Which song did the lyrics: "But you were young and bold, and baby didn't that change with the wink of your eye" appear in?


Answer: Ibanez Destroyer and the White and Black Frankenstrat

Charvel was the one of the first companies to utilize the Floyd-Rose locking nut system. Eddie actually got one of the first three prototypes and helped out the creator to make it better.
8. Why is "Van Halen 2" dedicated to the Sheridan Hotel, seventh floor?


Answer: They destroyed the place on their first tour.

They completely destroyed this hotel. Alex was spraying everyone's luggage with the fire extinguisher and Dave was whipping chairs and tables out of the window (from the seventh floor!). And lastly the weirdest one, Mike taped fish to the ceiling of the hotel.
9. Name the song that contains the lyrics "With it looks to me like she'd like to fool around".

This is probably one of the most popular and known songs on the album. It shows that Eddie could play the rhythm guitar as well as shred as this song contains a dazzling riff.
10. 1980 was a huge year for albums. Which guitarist was featured on an album who had asked Eddie about his whammy-bar techniques?

When Randy played for Quiet Riot he had asked Eddie about his ability to use the whammy-bar so effectively and not go out of tune. Randy asked how he did it. Eddie stuck to his honour and kept the secret that Jeff Beck had taught him to himself.
11. What was the name of Dave's bodyguard?

Jim Dandy was the guy Diamond Dave got his moves from when he decided to be a rock star after witnessing a "Mammoth" concert. Don Landee was the engineer that built Eddie Van Halen's studio. Ed Anderson was appointed during the tour after the "Women and Children First" record was released because Dave was a handful to take care of.
12. What guitar is Ed seen with on the cover of the "Women and Children First" record?

This picture was taken with Ed holding an Ibanez Destroyer which is one sweet looking guitar. But later Ed decided to make it look "cooler" so he decided to saw a piece of it off. But he didn't know he had just killed his guitar. He had to borrow a Destroyer for the rest of the "Women and Children First" tour.
13. Which song on "Diver Down" features Ed and Alex's dad, Jan Van Halen?

This album didn't come out until 1982 but I thought that this should be included in this installment of Hard core Van Halen. Jan plays clarinet in this song. He was Ed and Al's biggest inspiration. They'd sit there for hours and listen to their dad play the piano, saxophone and clarinet and they couldn't help but be inspired by it. Jan would attend their concerts and when Eddie was playing one of his beautiful solos, Jan would break down and cry and Eddie would see this and begin to cry, right in the middle of his solo. (info courtesy of the book "Van Halen 101")
14. The lyrics "I'm only wastin' time I think a better go" are from which song?

When Ed Anderson heard this album ("Women and Children First") he said it was "Rock and Roll". He said that the opening sound on "...And the Cradle Will Rock" was ELECTRIFYING.
15. In their club days, what drum solo would Alex play?

This was to pay "homage" to one of his favourite drummers of all time. When experts look at Alex Van Halen they usually compare him to Ginger Baker.

This was my second quiz and it focused on probably some of the best days in Van Halen hisory. Wait, as me (this 14 year old) dazzles you with some more Van Halen Trivia
Source: Author evh 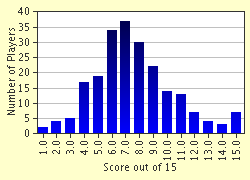