"The Name Of The Game" - song quiz

Do you like this ABBA song lots and know it well? Then this quiz should be really easy!

Quiz Answer Key and Fun Facts
1. In what year did ABBA release this song?

In 1977, this was the group's first single off "ABBA - The Album"
2. In which of the following countries; WAS the single "The Name Of The Game" released?


Answer: All of these countries

The single was released in ALL of these three countries; Canada, Sweden and Australia. It charted top 15 or higher in all of these countries on the singles charts.
3. In the UK, what was the B-side of this single?

"I Wonder (Departure)" was from a mini-musical "The Girl With The Golden Hair" but also included as track 8 on "ABBA - The Album" as well as the B-side of "The Name Of The Game" in the UK.
4. What was the single "The Name Of The Game"'s highest position on the USA singles (Billboard) hot 100 chart?

This song peaked at #12 on the Billboard hot 100 singles chart, making it ABBA's fifth-highest charting single in the USA.
5. In which of the following countries did "The Name Of The Game" NOT chart in the top 5?


Answer: "Now I am here, talking to you, no wonder I get excited"

The correct addition to this excellent lyric is "Now I am here, talking to you, no wonder I get excited". This is in verse 2, which is regretfully sometimes removed when the song is placed on a compilation.
7. Which of the following lyrics comes directly before the FIRST chorus in "The Name Of The Game" ?


Answer: "But I think I can see in your face, there's a lot you can teach me"

The actual verse ends with "But I think I can see in your face, there's a lot you can teach me", before the words; "So I wanna know" with the chorus beginning..."What's The Name Of The Game...."
8. Which of these categories is most correct for the LENGTH of this track (full version from "ABBA-The Album")


Answer: between 4 and 5 minutes


Answer: "Knowing Me, Knowing You"

Though both the songs "Knowing Me, Knowing You" and "The Name Of The Game" peaked at #1 in the UK for 5 weeks and 4 weeks (respectively), no other ABBA singles were officially released in the UK this year.
Source: Author TobyNZ 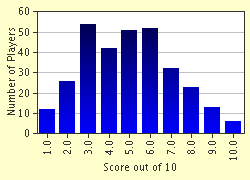 
Other Destinations
Explore Other Quizzes by TobyNZ