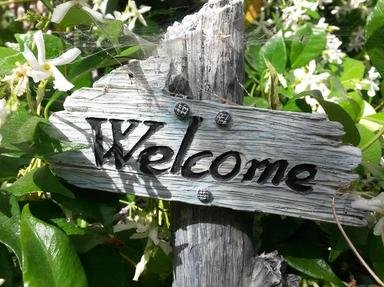 A Pub With No Beer Trivia Quiz

Theft is rampant in the normally idyllic town of Casualville. Deputygary and Lieutenant Leelee are on the case. What could be worse than a pub with no beer? Choose the best answer for the blank.

Quiz Answer Key and Fun Facts
1. "Dagnabbit!" drawled Deputygary. "First our pub has no beer and now this!" He sensed something evil was astir, even though the investigation had just begun. "Whut in tarnation?" exclaimed Lieutenant Leelee. "The town vintner has no ____."

A vintner is a wine merchant or a winemaker. Take Lee's advice; treat yourself to a daily glass of red wine and enjoy its health benefits!
2. Lieutenant Leelee started taking notes as they walked up the street to another crime scene. "Well, that just dills my pickle!" declared Deputygary as he scratched his goatee. "Arcane's Tack shop has no ____."

A tack shop is an equestrian supply store. Things such as riding equipment, riding apparel and horse care products can be purchased. And, if you need to know anything about horses just ask arcane62.
3. "These thieves are dumber than stumps," bragged Deputygary as he dusted some fingerprints. "Look at all the evidence they left behind". "And lookit all the stuff they took," added Lieutenant Leelee. "This chandler's shop has no ____."

A chandler is a person who makes or sells candles. In a more generalized form, a chandler can also refer to a dealer in a specified trade or merchandise. Casualville isn't a hick town; they sell energy efficient light bulbs too.
4. The duo continued to follow their trail of clues. "Well butter my biscuit!" stammered Deputygary. "Take a look at this lieutenant!" Lieutenant Leelee peered in the window to discover that Paul's Pâtisserie had no ____.

A pâtisserie is a bakery that specializes in pastries and cakes. In France, for a bakery to legally use the title of pâtisserie it must employ a master pastry chef (a maître pâtissier). The laws are less stringent in Casualville.
5. The deputy and lieutenant mounted their horses and trotted over to the other side of town. "Whoa! My horse is acting crazier than a sprayed roach!" gasped Lieutenant Leelee. "That's because he's reacting to this!" asserted Deputygary as he pointed to Mikey's, now mangled, Menagerie. "They ain't playing possum lieutenant, they're gone! The menagerie has no ____."

A menagerie is a collection or facility of wild animals for study or display. More loosely, the term can also mean a diverse or miscellaneous group. Some might say The Incredible Casuals are a menagerie, but I would beg to differ.
6. Thoroughly shocked to the core, the duo continued with their investigation. "No, this can't be!" wailed Lieutenant Leelee. "You're lying like a no-legged dog, deputy!" "I'm afraid not," stated Deputygary solemnly. "Honeybee's Confectionery is bereft of all ____."

A confectionery is a candy or sweet shop. It can also refer to a collection of sweets or to the skill or occupation of a candy maker (confectioner). One thing's for certain and that's Honeybee4 is a sweet lady!
7. "This is too much pumpkin for a nickel," muttered Deputygary as he filled up his second book with notes. "You're just plumb tuckered out deputy," reckoned Lieutenant Leelee. "C'mon! We've got work to do. Look, Albert's Apothecary has no ____."

The word apothecary, now considered archaic, can refer to either a pharmacist or a pharmacy (that is, a person or establishment that prepares and dispenses drugs and other medicines). If you think Albert's on drugs, he's not; it's just the wine.
8. "All this investigatin' is makin' me hungrier than a spring bear," grumbled Lieutenant Leelee. "Let's take a break." "We can't stop here," replied Deputygary. "Looks like Jimbob's Noshery has no ____."

A noshery is an informal term for a restaurant or other place (café, snack bar etc.) where food is served. Jimbob55 cooks while he quizzes, and quizzes while he cooks.
9. It was a day without coffee and donuts, but that didn't hinder Deputygary and Lieutenant Leelee's progress. They arrived at Houston's Ironmongery next. "In all my born days I ain't seen nothin' like this," blurted Deputygary. "There ain't a stitch of ____ in this place."

An ironmongery is a hardware store or business. The term can also refer to the stock of a hardware store. In Casualville, Houston always has the sharpest tools in the shed.
10. "I do believe this is the last crime scene deputy," surmised Lieutenant Leelee. "Let's hope so lieutenant," sighed Deputygary. "I feel like I was rode hard and put away wet. And now, them thieves have stolen all the ____ from the Millinery."

Millinery refers to the art and trade of designing and making women's hats. It can also mean the shop or business of a milliner. Deputygary prefers to go to a hatter, but he's a bit mad anyway.
Source: Author Squisher 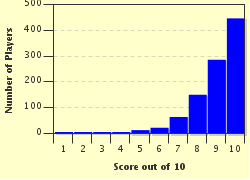 
Other Destinations
Explore Other Quizzes by Squisher