Quiz Answer Key and Fun Facts
1. Princess Elizabeth Alexandra Mary was born on April 21, 1926. Where was her birthplace?

Although her parents were living on Curzon Street, Elizabeth wanted to be with her mother when she gave birth so they moved in with her parents, the Earl and Countess of Strathmore at Bruton Street. The building is still standing in Mayfair, with a plaque commemorating her birth.

In August, 1930, again to be with her mother, Elizabeth chose to give birth to her second child, Princess Margaret Rose, in Scotland at the Strathmore's summer residence, Glamis Castle.
2. What royal title did Princess Elizabeth's parents hold at the time of her birth?

Traditionally the second son of the monarch is given the title of Duke of York. With the coronation of King George VI, the dukedom went into abeyance until Prince Andrew, second son of Queen Elizabeth II, was granted the title in 1986.
3. Where were the principal homes of the family?


Answer: 145 Piccadilly and The Royal Lodge

145 Piccadilly was a 25-room mansion with an electric elevator and a ballroom. It also featured a large glass Victorian dome on the top floor. It was destroyed during the bombing of London. The Royal Lodge was their weekend home in Windsor Park which had been given to them by King George V.
4. Princess Elizabeth's nanny was always referred to as "Allah". What was her real name?

The daughter of a tenant farmer at the Strathmore's Hertfordshire estate, Allah, when she was only 17 years old, had been picked by Lady Strathmore to take care of her new baby Elizabeth Bowes-Lyon and in turn her younger brother, David Bowes-Lyon. When Elizabeth and David outgrew the need for a nanny, Allah cared for the Strathmore grandchildren until rising to the top of the heap of nannydom by becoming a royal nanny.
5. Allah had an assistant nanny. This Scottish woman stayed with the Princess and then the Queen until her death. What was her name?

Known as "Bobo", Miss MacDonald rose to the position of the Queen's Dresser. She was one of the few people that the Queen trusted completely. Although she had been offered thousands of dollars to "tell all", she always sent the publishers and reporters packing. She was a great loss to the Queen when she died during the 1990s.
6. When Princess Elizabeth was six years old a governess was engaged to begin her education. What was her name?

"Crawfie" as she was known stayed with the family for 18 years. She then was ostracized forever when she wrote the book, "The Little Princesses", which became a best seller and was the first "tell all" book about the Royal Family. From then on, any servant who wrote a book was spoken of as "doing a Crawfie."
7. Princess Elizabeth had lots of activities that she enjoyed. What, according to her governess, was her favorite?

According to her governess, Lilibet was so taken with horses and horseback riding that anyone wanting to give her a Christmas gift just picked the latest horse book to give her. To this day horses are still the Queen's great passion. She was good at swimming and a dutiful Girl Guide, however, sewing was not one of her strong points.
8. In 1936 King Edward VIII abdicated his throne to marry Wallis Simpson. At what exact moment did Princess Elizabeth's father become King George VI?


Answer: The moment Edward VIII signed the Instrument of Abdication

With the stroke of his pen King Edward VIII gave up his position and his brother became King. The family then moved out of their beautiful London home and into Buckingham Palace.
9. At what age, and under what circumstances, did Princess Elizabeth meet her future husband, Prince Philip, for the first time? She was quite smitten by him and the two exchanged letters for years until she was 21, when they were engaged.


Answer: She was 13 and met him at Dartmouth Naval College

The King and Queen accompanied by the two princesses were on an official visit to Royal Dartmouth Naval College in 1939, where Prince Philip was a cadet. Philip was invited to lunch and Lilibet was very taken with him. She never wanted any other man but Philip. They celebrated their platinum wedding anniversary (70 years) in 2017.

Princess Elizabeth and Prince Philip "may have met" in 1934 when both of them were very young; she was 8 years old. They were both great-great-grandchildren of Queen Victoria, and both of them attended the wedding of her uncle Prince George, Duke of Kent, and his cousin Princess Marina of Greece and Denmark.
10. At the outbreak of World War II the King and Queen let it be known that they were going to remain at Buckingham Palace for the duration of the war. It was also announced that their two daughters had been evacuated to a "house in the country". To which house were they evacuated?

The two princesses remained at Windsor for the entire war. The crown jewels were stored there, wrapped in newspaper, and placed in large crates! Buckingham Palace had been bombed nine times during the blitz. As all their windows were broken, the palace was too dangerous for them for them to sleep there.
Source: Author lilibet81 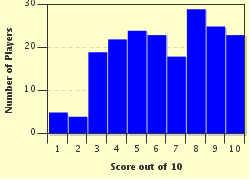 
Other Destinations
Explore Other Quizzes by lilibet81