Ginger Lacey after the Battle of Britain Quiz

You may have played the 'Battle of Britain Fighter Ace' about Ginger Lacey. This quiz follows Ginger and what he did during the rest of World War II. Enjoy!

Share on Facebook
Share on Twitter
Share by E-Mail
Author
Quiz_Beagle
Time
6 mins
Type
Multiple Choice
Quiz #
251,882
Updated
Dec 03 21
# Qns
15
Difficulty
Tough
Avg Score
9 / 15
Plays
414
Awards
Top 10% Quiz
This quiz has 2 formats: you can play it as a or as shown below.
Scroll down to the bottom for the answer key.

Quiz Answer Key and Fun Facts
1. On 15 January 1941 Sergeant Pilot J H Lacey was formally discharged from the RAF and re-entered service as what?

According to the book 'Ginger Lacey, Fighter Pilot' by Richard Townshend Bickers, he only became an officer because holders of the DFM (which he was) got a Ł20 cash bounty on leaving the service. Being discharged and becoming an officer was the quickest way to get the cash! Despite his famous nickname, his wife and close friends all called him 'Jim'.
2. On 24 July 1941, flying a Spitfire Mk II equipped with 30 gallon long-range tanks under its wings, Ginger Lacey ran out of ammunition and only lived because the two Me109s pursuing him collided. He was over Brest, proving cover for Wellingtons attempting to bomb what?

Set on by two Me109a simultaneously, his aircraft was damaged and it was only his airmanship that saved him. From his logbook: '2 Me109s destroyed (by collision) Oh what a prang was there my countrymen. (Quote from someone or other)' (It seems that he had 'Oh what a fall was there, my countrymen' from Marc Anthony in mind...)
3. On 18 August 1941 Lacey was posted as an instructor to No.57 Operational Training Unit at Hawarden in Flintshire. Whilst there he had a memorable student, who he described as 'a wonderful pilot, and even better shot'. This Canadian student, whose given first name was George, became known as 'The Falcon of Malta' and was one of the best aces of World War II. What was his best-known nickname?

George 'Screwball' Beurling (earlier known as Buzz) had applied to join the Royal Canadian Air Force, but was turned down - a decision the RCAF later admitted was a mistake. This fascinating man was killed in 1948 and now rests in Mount Carmel Cemetery as an Israeli hero. 'Sailor' Malan was a South African ace and 'Cats-Eye Cunningham a RAF night fighter - the only 'Dizzy' I know of is the Jazz player Gillespie...
4. In 1942 Ginger Lacey joined 602 (City of Glasgow) Squadron, led by Squadron Leader 'Paddy' Finucane, another Battle of Britain ace. On 24 March, which aircraft did Ginger Lacey encounter for the first time, damaging it, but was left with the impression of a fighter 'which could walk away from a Spitfire with no trouble at all'?

The Focke-Wolf 190 was one of the best fighters of World War II, with a top speed of 400 mph. Ginger Lacey damaged 3 Fw-190s but never shot one down.
5. On 25 April 1942 the Squadron had a visitor. Lacey, always a hospitable type, promptly bought him a pint of beer, which he drank, but Lacey noticed a small frown on C-in-C Fighter Command's face. The visitor had a sherry as his next drink. Who had Lacey bought a pint for without ascertaining his taste?

He would buy anyone a pint! Pints of good bitter, red wine, G&T and good malt whiskys were his tipples. An early encounter with Somerset 'scrumpy' (strong cider) left him with a lifelong aversion to the drink! Albert Ball was a famous British WWI fighter ace.
6. After a spell as 'Tactics Officer' with HQ No. 18 Group and some time at Boscombe Down as a test pilot, followed by instructing again, Lacey was posted overseas. He travelled on the SS Aorangi to an unknown destination. Who did he meet on the ship?

Lacey thought that the Wren, Sheila, had the finest legs on the ship! They were married for 42 years, so not a bad way to pick a wife!
7. Arriving in Bombay, Lacey was having a drink with an Indian Army subaltern from Probyn's Horse, when he was set upon by an American Air Corps Captain. How did Lacey take his revenge?


Answer: Got him drunk and had a Union Jack tatooed on his chest

The American, identified only as 'Chuck' in 'Ginger Lacey, Fighter Pilot', had just been ditched for an Englishman by his English fiancee, so was feeling very disgruntled. An American major, who helped Lacey do this, was very amused by this creative revenge!
8. Desperate to command a squadron, the then Squadron Leader Lacey became Squadron Leader Training of Third Tactical Air Force HQ in Komila, sharing an office with the only Fighter Command VC of WWII. Who was this man?

Jimmy Nicholson won his VC for an epic battle when, having been shot by a Me-110 he went on to destroy another Messerschmitt despite his Hurricane and himself being on fire. Although he recovered from his injuries, he was killed in action in India. The wrong answers are all Victoria Cross recipients. The VC is the highest and most prestigious award for gallantry in the face of the enemy that can be awarded to British and Commonwealth forces.
9. Following another course, Lacey was given temporary command of 155 Squadron for three weeks and then, at last, on 23 November 1944 was given his first squadron, No. 17 Squadron at Sapam in Assam. Does this squadron still exist in the RAF?

According to www.raf.mod.uk, 'on 19 May 2005, the Squadron officially reformed with the presentation of the Squadron Standard at RAF Coningsby in Lincolnshire, to become No 17 (Reserve) Squadron, the Typhoon Operational Evaluation Unit'.
10. On 14 December 1944, 17 Squadron moved to Takkuyan in Burma. What unconventional order did Lacey issue in order for 17 to become 'the first Gurkha squadron in the RAF'?


Answer: All ranks to shave their heads in the Gurkha style

Shaven heads (with a Hindu topknot to enable them to be 'carried off to Heaven') raised morale among the Squadron and the locals, but was not received well in the stuffier parts of the RAF! Needless to say, Lacey returned from Burma with his own Kukhri...
11. On 19 February Lacey shot down his only Japanese aircraft of the war, an Oscar. A worried flight-sergeant fitter asked him if he was sure he'd got the Oscar, as he had only used 9 rounds of ammunition. What was Lacey's reply?


Answer: 'Oh, really Flight? As many as nine? You surprise me!'

Ginger and Sheila got married in Kodaicanal, India. Their home in Flamborough, where Ginger retired to, was called 'Kodai', leading all his daughters to imagine they had married in a canal! Nobody ever spelt the name of the house right...(Ginger Lacey was stung 3 times in one day by a scorpion, but that was on April 13 1945 - I don't know if it was a Friday!)
13. On 16 July, only 8 days after his wedding, Lacey returned to his Squadron to try out the new Spitfire XIV - and promptly nearly killed himself! Trying out what manoeuvre?

He'd gone into the loop much too slowly snd at the top, stalled and spun inverted. He only just managed to pull out in time. In his own words in the book, 'Ginger Lacey, Fighter Pilot' - 'I have never been closer to being killed'.
14. Although the war ended on 15 August 1945 (VJ Day), the invasion of Malaysia was planned, and although it had changed from 'Operation Zipper' to 'Exercise Zipper', Lacey was on the way to Malaysia. What did he do from HMS Trumpeter?

The take off was achieved from a 420 foot deck! Luckily, HMS Trumpeter manged a heroic 17 knots and all 20 of the Spitfires took off safely.
15. With the war over, it's time to end this quiz. However, Lacey became the first Spitfire to fly over Japan at the end of the war on 20 April 1946. What was his logbook comment?

On VJ day his logbook comment was 'Japs pack in. Now for the next war'. Ginger Lacey went on to do many more exciting things until his death - if you're interested in doing another quiz, please let me know. Don't forget to rank this quiz, and I welcome all feedback!
Source: Author Quiz_Beagle

This quiz was reviewed by FunTrivia editor DakotaNorth before going online.
Any errors found in FunTrivia content are routinely corrected through our feedback system.
Most Recent Scores
Dec 24 2022 : higgybaby105: 1/15
Dec 10 2022 : Guest 213: 12/15 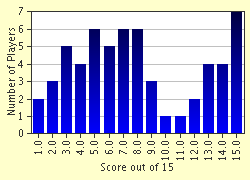