I give you some information on this famous Scientist or Inventor and you tell me who he is. Easy as pi...or is it?

Quiz Answer Key and Fun Facts
1. He was born on March 14th, 1879 in Ulm, Germany. Although he had early speech difficulties, it did not stop him from pursuing a career in mathematics and physics, and in 1905, at the age of 26, he developed his special theory of relativity, or E=mc˛. He died on April 18th, 1955 in Princeton, New Jersey, USA. He was aged 76. Who was he?

Einstein's general theory of relativity is the theory that time and space aren't absolute concepts instead they are relative concepts. Whereas his theory of special relativity (E=mc˛) is the physical theory based on the premise that the speed of light is the same all the time in a vacuum and that the laws of physics are going to remain unchanged in all inertial frames of reference. Along with this, Einstein came up with other theorems such as the first fluctuation dissipation theorem and the theory of density fluctuations in gases and liquids.
2. Born in Cullom, Illinois on April 10th, 1900, he was the son of a blacksmith. He developed a great interest in chemistry from childhood, such that in 1934, he devised the pH meter, a device for measuring acidity. In 1988, he was awarded the National Medal of Technology to be followed a year later with the National Medal of Science. He passed away in 2004 on May 18th in La Jolla, California. Who was he?

At age nine, Beckman found a chemistry textbook belonging to his father. With this he tried many experiments leading to his fascination with the subject. Beckman also funded the first silicon transistor in 1955.
3. Born on August 30th, 1871, in Brightwater, New Zealand, he is known as the father of nuclear physics. In 1908, he was awarded the Nobel Prize in Chemistry due to "his investigations into the disintegration of the elements, and the chemistry of radioactive substances". In 1909, he directed an experiment to split the atom, later known as the gold foil experiment. He died on October 19th, 1937, at the age of 66, in Cambridge, England. Who was he?

In 1914, Rutherford was knighted and in 1916, he was awarded the Hector Memorial Medal. This was followed in 1925 by admission into the Order of Merit. He was made Baron Rutherford of Nelson in 1931. Other experiments controlled by Rutherford include the first attempt to split the nucleus in 1932.
4. He was born on November 25th , 1844, in Karlsruhe. He attended the scientifically orientated school, Lyzeum. At the age of 15, he passed an entrance exam for mechanical engineering at the University of Karlsruhe. He graduated when he was nineteen. He is widely regarded as the inventor of the gasoline-powered automobile, and in 1879 he was granted a patent for his first engine which he had designed in 1878. He died on April 14th, 1929 in Ladenberg, Germany. Who was he?

Benz was born Karl Friedrich Michael Valliant but when he was two, his father died in a railway accident. His name was then changed in remembrance of him. He is considered the pioneering founder of the automobile company, Mercedes-Benz.
5. He was born on December 28th, 1798 in Dundee, Scotland. He was educated at the high school of Dundee. His love of astronomy took him to Africa in April 1832 where he discovered that the star, Alpha Centauri, had a large proper motion, which indicated to him that it was quite close. He then retired back to the United Kingdom. While in the UK, he concluded that Alpha Centauri was 3.25 light years away, although he didn't publish his findings because of his uncertainty about their accuracy. He died on November 23rd, 1844 in Edinburgh at the age of 46. Who was he?

Henderson went back to the UK, due to bad health, where he was appointed as the first astronomer for Scotland in 1834. He was beaten in publishing his findings by Friedrich Wilhelm Bessel, who found that 61 Cygni was 10.4 light years away. It was later discovered that Henderson's calculations of Alpha Centauri's distance of 3.25 light years away was 33.7% too small and Friedrich Wilhelm Bessel's calculations of the distance to 61 Cygni was 9.6% too small.
6. Born on December 27th, 1822, in Dole, he was regarded as one of the three main founders of microbiology, and on April 12th in 1862, he discovered the process later called pasteurisation. Another of his discoveries was the rabies vaccine. He first tested it on a human on July 6th 1885, on a nine year old boy, Joseph Meister, who had been attacked and severely mauled by a rabid dog. He died near Paris on September 28th, 1895. He was 73 years of age. Who was he?

Other discoveries of Pasteur's reduced the mortality rate of puerperal fever. He also was the first person to encourage the washing of hands and the sterilisation of tools before surgery.
7. He was born in 1782 in Hounsfield, New York. In the winter of 1810-11, he attended the College of Physicians and Surgeons of New York (now Columbia University), and in the January of 1815, he attended lectures at the University of Pennsylvania. He then moved to Sacketts Harbour, Jefferson County, in the far north of New York state to become a country doctor. 14 years later, he discovered anaesthetic chloroform (tri-chloroform). He passed away in 1845. Who was he?

Although Eugene Soubeiran and Justus Liebig discovered chloroform in the same year (October and November respectively) Guthrie was the first to publish his findings. He also manufactured chloric ether, vinegar and priming powder for firearms. He converted potato starch into molasses and distilled his own alcohol.
8. He was born in Chicago, Illinois on April 6th, 1928 and is known for his discovery of the structure of DNA. In 1956, he was appointed as a junior member of Harvard Universities Biological Laboratories. He was there until he resigned in 1976. During his stay there (in 1968), he also became director of Cold Spring Harbour Laboratories, where he studied cancer. In 1962, along with Francis Crick and Maurice Wilkins, he was awarded the Nobel Prize in Physiology or Medicine. Who is he?

Watson, Wilkins and Crick were awarded the Nobel Prize for their contribution to the advancement of the understanding of the molecular structure of nucleic acid and its significance for information in living material.
9. He was born in Baku, Azerbaijan, on February 5th, 1879. He attended the universities of Zurich and Berlin and is known because of his contributions to the founding of colour television. The first experiment of colour television was in London in 1928 based on his tri-colour principle. He achieved this by further developing theoretical works by M. Le Blanc and P. Niptov. He passed away on September 12th, 1932. Who was he?

Adamian, an Armenian engineer and inventor of over 20 objects, was also known as a caricature artist.
10. He was born on August 5th, 1884 in Warsaw, Poland. In 1902, he attended the University of Wurzburg and transferred to Berlin in 1904 to do papers in Medicine and Philosophy. He was then appointed assistant in cancer research at Heidelberg Institute for experimental cancer research under E. von Dungern. He soon discovered the heritability of blood groups. With the help of his friend, von Dungern, he changed the names of the blood types, I, II, III and IV to A, B, AB and O. He passed away on March 7th in 1954 at the age of 69. Who was he?

Although von Dungern and Hirszfeld formed a fast friendship, Hirszfeld left to go to the University of Zurich to work in the Hygiene Institute. Whilst there, he discovered from what he had found out about blood types that serology could be used to establish paternity. Hirszfeld and his wife also helped anti-epidemic strategies against typhus and tuberculosis in the Warsaw ghettos in 1941 before they changed their names and moved underground.

His daughter died in 1943 of tuberculosis.
Source: Author Orange_cats 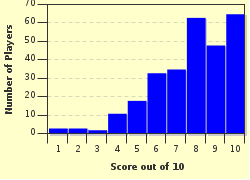 Related Quizzes
1. Pioneers in Medicine Difficult
2. Only the Greatest! Easier
3. Who? Tough
4. Something New Average
5. The Wright Stuff Average
6. Innovations, Inventions and Other Novelties Difficult
7. The Study of Life Average
8. History's Heroes 1 Average
9. Interesting Times Average
10. Biographies of Chemists Average
11. Left To Their Own Devices Average
12. Behind the Units - Mechanics Average


Other Destinations
Explore Other Quizzes by Orange_cats