This quiz will cover some of the well-known and lesser-known figures of the art world. Simple guess the artist from the clues presented. Oh yes, all names will begin with 'A'...good luck!

Share on Facebook
Share on Twitter
Share by E-Mail
Author
thejazzkickazz
Time
5 mins
Type
Multiple Choice
Quiz #
169,489
Updated
Dec 03 21
# Qns
10
Difficulty
Tough
Avg Score
5 / 10
Plays
1779
Awards
Top 10% Quiz
This quiz has 2 formats: you can play it as a or as shown below.
Scroll down to the bottom for the answer key.

Quiz Answer Key and Fun Facts
1. This French artist of the Dada movement spent much of his art life with his wife Sophie, whom he loved dearly. He was most famous for his work as a sculptor, and found himself associated with the Surrealists as well. What was his name?

Jean (or Hans) Arp was married to Saphie Taeuber in 1922 (the two met in 1915). Arp was a founding member of the Dadaist movement and also participated in the 1925 Surrealist exhibition, the first of that movement.
2. What American artist was famous for his marvelously colorful 'Birds of America'?

John James Audubon was the illegitimate son of a French sea captain and a Haitian woman. While young, he studied in France under the Neo-Classicist master David, but left that country in 1803 and made his way to America. His masterwork was called 'The Birds of America, from Original Drawings, with 435 Plates Showing 1,065 Figures' (published in four volumes).
3. Which 16th century painter from Milan was famed for his bizarre paintings of human figures which were entirely comprised fruits, vegetables, animals and other objects?

Arcimboldo's works were generally ignored by the art community until they were revived in the 20th century by the Surrealists. Now, his works are so prized that they can be found especially presented in the Louvre!
4. This early 16th century Italian painter was the subject of a Robert Browning poem. He was also roundly criticized by Vasari for being helplessly subservient to his wife. Despite this defamation, he remains one of the great figures of Florentine art of the generation just following Raphael, Michelangelo and Leonardo. Who was he?

Andrea del Sarto was born Andria d'Agnolo di Francesco, but was called 'del Sarto' because his father was a tailor. Some of his most magnificent works are housed in the Pitti Palace in Florence. It is likely that Vasari's account of Andrea del Sarto was largely false (something for which Vasari was well-known!)
5. He was considered to be one of the founders of modern architecture, and indeed his was the first printed work on the subject in 1485. What was the name of this great figure?

Leon Battista Alberti was the key Renaissance theorist in the field of architecture and the arts. His 'De Re Aedificatoria' was the work mentioned in the question.
6. Who was the first international known female art figure?

Sofonisba Anguisciola was a 16th-17th century Italian painter of portraits. In 1623, two years before her death, she sat for a van Dyck portrait. She was well into her nineties at the time!
7. The famed English art critic John Ruskin referred to this 15th-century Italian artist as a 'saint'. Indeed, in 1984 he was beatified by the Pope. Who was this friar-painter?

Fra Angelico (Guido di Pietro) was truly a saintly man by all accounts (Vasari also called him 'saintly'). He was also an industrious artist whose paintings and murals can be seen throughout Florence.
8. Though born and raised in Germany, this artist became truly famous after immigrating to America and teaching at both Black Mountain College and at Yale. His most well-known art consisted primarily of plain-colored squares. Who was this 20th-century artist?

Josef Albers was a teacher at the Bauhaus for 10 years, and also studied there. He was the first graduate of that institution to propagate the ideas of Bauhaus in the United States.
9. Though not a painter in his own right, this French art critic and poet was one of the most important figures of the art world in the early 20th century. Particularly, he did much to help popularize and publicize the works of the Cubists and the Futurists, and he coined the term 'Surrealist'. What was his name?

Guillaume Apollinaire did much to raise the stature of such painters as Picasso, Matisse and Braque, some of the founding figures of modern art. In fact, it was Apollinaire whose writings first brought Picasso to the attention of the French public. Sadly, he died at the age of 38 from complications relating to wounds he suffered during World War I.
10. This man was the court painter to Alexander the Great, and descriptions of his works (of which none survive) inspired some of the Renaissance greats. Which of the following was he?

Apelles is said to have fallen in love with one of Alexander the Great's mistresses called Panscape. Alexander was so struck by Apelles' great love that he let him have Panscape as his lover. Though none of Apelles' works survive, the descriptions of his paintings inspired Renaissance artists such as Botticelli, Mantegna and Titian. Thank you for trying this quiz, I hope you enjoyed it and will try some of my other quizzes.
Source: Author thejazzkickazz

This quiz was reviewed by our editing team before going online.
Any errors found in FunTrivia content are routinely corrected through our feedback system.
Most Recent Scores
Feb 05 2023 : turaguy: 10/10
Jan 27 2023 : agentofchaos: 10/10 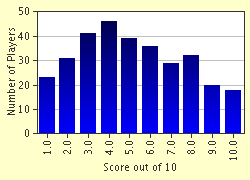