Henry V has been immortalized by his victories against the French and by Shakespeare who wrote for the Henry of his play the wonderful St-Crispian's speech. But how well do we remember this legendary King?

Quiz Answer Key and Fun Facts
1. Henry was born in 1387, son of Henry IV and Mary de Bohun. Where was he born?

Today, Monmouth Castle is in ruins but this little Welsh town is well worth visiting.
2. In which year was Henry made prince of Wales?

The same day his father was crowned King of England.
3. Who was the leader of the Welsh uprising of 1400?

Owen Tudor will be the second husband of Henry's widow. Burnell was Chancellor under Edward I and Gruffydd led the Welsh revolt of 1277.
4. One man fighting with the Welsh rebels was a friend of Henry and taught him the art of war. He was nicknamed Hotspur. What was his real name?

Prince Henry fought against Percy at the battle of Shrewsbury in 1403. Percy was killed this day.
5. From 1406 onward, Henry became interested in politics and made his presence felt at meetings of the Council. In 1410, he took over as the leader of this Council. Who was the leader prior to him?

In 1411, Henry IV deceived by talks of abdication, sacked his son and brought back the Archbishop. The Prince made a very good impression while he was there and was even thanked by the Commons.
6. Prince Henry had many valuable councillors, the Archbishop's nephew Richard Earl of Arundel was one of them. But his most faithful supporters were his half-uncles Henry and Thomas, sons of John of Gaunt. What was their last name?

Henry was Bishop of Winchester at the time, he later became Cardinal. Thomas was Duke of Exeter, he acted as Chancellor when Prince Henry was at the head of the Council.
7. In 1407, a civil war erupted in France opposing the Armagnacs (partisans of Charles VI's brother, the Duke of Orleans) and the Burgundians (allied to the French King's cousin, the Duke of Burgundy). Which of these factions was favoured by Prince Henry?

The King prefered an alliance with Orleans. In 1411, while in control of the Council, Prince Henry sent troops to help the Burgundians. A year later, his brother Thomas sided with his father the King and crossed the Channel with a large army to help the Armagnacs.
8. After he became King, Henry V tried to reconcile with the people who suffered under his father's reign, he even had the body of Richard II reburied in great pomp. Where was Richard reburied?

It is said that Henry kept some affection for Richard who refused to use him as an hostage in 1399 when his father seized the throne.
9. For many years, Henry had views on France. In 1415, he requested for England, all of the old Angevin Empire including Anjou, Maine and Normandy. The French government rebutted him and Henry raised his army. In August, Henry left Southampton for Normandy. Which city did the English besiege in August and September?

Harfleur surrendered on 22 September.
10. We all know that the battle of Agincourt was fought and won by Henry and his army on St. Crispian's Day, but when is it exactly?

During this bloody battle, the French lost 6,000 men, many soldiers and nobles were captured and ransomed. Henry lost 400 men including the Duke of York and the Earl of Suffolk.
11. In 1416, Henry gained a valuable and powerful ally in his claim to the French throne. Who was it?

The Emperor was mandated to act as mediator in the conflict, but Henry soon convinced him of his rights on France and had him sign the Treaty of Canterbury.
12. In May 1420, a Treaty was signed with France. One of its clause made Henry the heir of Charles VI. What is the name of this Treaty?

In June of the same year, Henry cemented his heirdoom by marrying Princess Catherine, the daughter of Charles VI.
13. In June 1421, Henry returned to the wars and besieged the last of the Dauphinist (formely known as the Armagnac) stronghold north of the Loire. This town surrendered in May 1422, it was to be Henry's last triumph. What was the name of this city?

Henry reigned only 9 years. He left a nine-month-old infant, the future Henry VI.
15. Soon after Henry's death, the Burgundian chronicler Chastellain wrote about him: 'He was a Prince of ....'. What was he a Prince of?

'He was a Prince of justice, he gave support to none out of favor, nor did he suffer wrong to go unpunished out of regard for affinity'.
Source: Author gywalgi 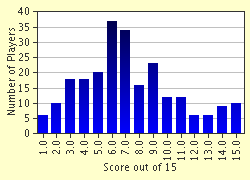 
Other Destinations
Explore Other Quizzes by gywalgi