Pirates today often wear three- piece suits and are found in oil companies, big business and government. Once upon a time, however, they were more open and more colorful.

Quiz Answer Key and Fun Facts
1. Perhaps the most famous pirate of all is Captain Kidd. What was his ultimate fate?


Answer: He was hanged

Kidd met the fate of many pirates - at the end of a rope.
2. 'Blackbeard' is also one of the most famous pirates. What was his real name?

Maynard is the officer who killed Blackbeard.
3. This island was a legendary haven for many pirates.

It's mentioned in countless tales of pirate adventure.
4. The flag that sailed atop many pirate ships was called what?

Skull and crossbones
5. Francis Drake was a buccaneer who led a colorful life. Which statement is NOT true of him?


Answer: Drake's memoirs created a scandal when published after his death

Quite a life - but no memoirs.
6. The most famous fictional pirate is probably Long John Silver. Name the author who created him.

'Treasure Island', with Jim Hawkins as protagonist. Defoe did 'Robinson Crusoe', which was based on the true story of a marooned member of a pirate crew.
7. Jean Lafitte was a pirate who provided assistance to America in what war?

Specifically, the Battle of New Orleans.
8. Which of these pirates is perhaps best known for his daring raid on Panama?

Morgan had a colorful and exciting life.
9. This island has been the subject of treasure hunting and speculation about buried pirate treasure.

The legend of Oak Island is fascinating. What's down there? Who put it there? How? Why?
10. This legendary author of children's books wrote a classic about pirates.

It's hard to find now - out of print - but boys will love it.
("Howard Pyle's Book of Pirates", I believe.)
Source: Author robert362 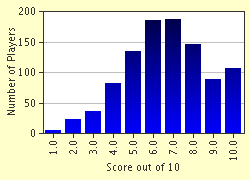