A Small Pirate Ship is Called a Thug-boat Quiz

Some pirates were thugs, some were aristocrats, some were ladies, and some were all three! Follow me on a gentle pillage through the annals of pirate history both fact and fiction...

Quiz Answer Key and Fun Facts
1. During the "Golden Age of Piracy" just two women were ever convicted of piracy. One was Anne Bonney, but who was the other?

English woman Mary Read spent her childhood disguised as a boy by her mother. This was because her older (legitimate) brother had died, and their mother wanted to keep getting money from his paternal grandmother. Mary stayed living as a man until she fell in love with a soldier, and revealed herself as a woman so they could be married.

After the untimely death of her husband, she took ship for the West Indies. When the ship was attacked and boarded by pirates, Mary joined them.

In 1720, Mary took the "king's pardon" turned and Privateer, and then joined forces with Anne Bonney and her lover Jack Rackham after they took her ship. The three, along with their crew, were captured that same year and sentenced to death by a court in Jamaica, but both Bonney and Read were spared as they were pregnant.

Records show that Mary Read died in childbirth, in jail in Jamaica, in 1721. It was not recorded what happened to her child, but it is assumed he or she died too.
2. Brothers Jean and Pierre Lafitte, the "Gentleman Pirates", were renowned for their fair and even handed treatment of the crews of captured ships, often returning the vessel back to its original crew once they had purloined the cargo. Unable to run their 'business' properly when the US Embargo Act of 1807 came into force, they founded their own port which was soon a thriving town. Where was this?

Under the terms of the Embargo Act, US ships were forbidden from visiting foreign ports. This caused difficulties for merchants and traders, and the Lafitte brothers spotted a "gap in the market" for smuggled goods.

Barataria was established on an island near the swampland of the Louisiana coast and quickly became a haven for sailors and assorted rogues eager to crew the pirate's ships.
3. In 1801, a fleet of notorious Pirates got together and declared war. The First Barbary War had begun, but who had the Pirates declared war on?

The Barbary Pirates were based in Tripoli, and had struck fear into the hearts of shipping in the Mediterranean for years.

On May 1 1801, they declared war on the United States of America. Prior to the American Revolution and its subsequent independence, American shipping in the Mediterranean had been under the protection of the British Royal Navy, and then the French Navy. By the 1780s however, this was no longer the case, and the pirates operating along the Barbary Coast of North Africa considered US shipping to be fair game.

For a while, the US Government had "taken the easy option" and paid tribute to the pirates in exchange for safe passage, but with the election of Thomas Jefferson as President, and extortionate increases in the pirate's demands, the situation quickly became untenable. Communications broke down, and the pirates, backed by their various rulers including the Pasha of Tripoli, declared war. Hostilities ended on June 10th 1805.
4. Charlotte Badger and Catherine Hagerty were the first Australian female pirates. They captured a ship and sailed it to New Zealand. What was the ship's name? (It is still sung about in, ahem, impolite company.)

English born Charlotte Badger was sentenced to be transported to Australia for the crime of theft. During her term of penal servitude she performed hard manual labour in a factory, and also gave birth to a daughter.

After her sentence had ended, Charlotte, her baby, and Catherine Hagerty (a fellow convict whose term was also served) took ship in the Venus heading for New Zealand.

The captain of the Venus was a sadistic bully, and drove the crew to mutiny. By this time, both Charlotte and Catherine had taken lovers among the crew, and they all continued onto North Island without the captain. They turned to piracy along the way, even though no-one left on board could actually navigate properly.

Legend has it that after the two women and their lovers settled ashore, the crew continued their piracy, and were eventually captured by Maori tribesmen; the Venus was burned to the waterline, and most of the crew were eaten!
They are remembered today as the first white women to settle in New Zealand. Catherine is reported to have fallen ill and died, but nothing is known for sure about the fate of Charlotte, or her child, once settled in New Zealand.

The story of "The Good Ship Venus" is now (in)famous in the words of a vulgar drinking song (which I have only heard about through my research for this quiz, and have never ever sung or heard sung, oh no no no!).
5. Perhaps the most famous pirate of all is Blackbeard. Can you remember the name of his ship?

Edward Teach was an Englishman who was both a privateer and a pirate in the Caribbean. Infamous for his brutality, he was a cruel and violent man who struck terror into the hearts of all who had the misfortune to cross him.

When he was eventually killed in a fight by one Lieutenant Maynard, acting on orders from the Governor of Virginia, Maynard took his head and hung it off the front bowsprit of his ship for the journey home.

Liberty was the ship of Thomas Tew, Rising Sun sailed under the command of William Moody, and the Great Ranger was the ship of Bartholomew 'Black Bart' Roberts.
6. One of the first English pirates was Lady Aethelflaed; on the death of her husband she took over the captaincy of the English fleet and sallied forth to fight the Vikings in the early tenth century. Her father was even more famous than she was; who was he?

The daughter, sister, and wife of Kings, Aethelflaed lived in violent times. When her husband Aethelred of Mercia was killed fighting the Vikings she took up the leadership of her people and made a pretty good job of it. She defeated the invaders in battle at Derby and Leicester, and even led an army to invade Wales.

For a woman to lead men to victory in battle was very rare (though not unique, Queen Boudicca of the Iceni had set a precedent) at this period in history.
Even the Viking population of Jorvik (York) made a treaty with Aethelflaed in order to have her protection from the new wave of Viking raiders.
When Aethelflaed died, her daughter Aelfwyn came to power, but she was ousted by her uncle Edward, King of Wessex, who seized control of Mercia in his bid to unify England under his sole rule.
7. Which famous fictional pirate was the Captain of the Black Pig?

Captain Pugwash and his crew were the stars of books and comic strips before being made into a kids' animated TV show for the BBC.

The books were written by John Ryan, and the TV show ran from 1957 into the 1970s. There is an urban legend that the crew of the Black Pig had 'dubious' names, but in reality they were Master Mate, Tom the Cabin Boy, Willie, and Barnabas. Captain Pugwash's name was Horatio. The 'baddie' in the stories was Cut-throat Jake.
8. The "Lady Pirate of Kootenay Lake" is something of a local legend in her part of British Columbia, Canada. Legends of her exploits abound; she dressed as a man until a severe injury, which cost her an eye, meant she was found out by a ship's doctor. With her secret exposed, she stole a boat and turned to piracy, striking terror into the hearts of everyone who crossed her path. Eventually she was betrayed by a member of her own crew, captured, and died in jail. Who is she?

Gertrude "Gunpowder Gertie" Stubbs has passed into legend, and has turned up as far away as Whitby in England as her fame spread.

She was actually made up by a Kootenay primary school teacher during a local history field trip for her class of young children. The kids told their parents the story, believing it to be true, and the local paper printed it as an April Fool. The story was so plausible, it found its way to Bob Johnson's "This Day in History" show, and was repeated nationally, but sadly, Gertie only exists in the 'hearts and minds' of the children of Kootenay County.
9. Should you happen to be troubled by Pirates, which Saint might you invoke to beg for protection?

St. Albinus was from an aristocratic Romano-French family, and lived in Brittany in the 5-6th centuries. He was a very pious man, and was famed for freeing slaves and prisoners, including those captured by pirates. He is the patron of many European coastal villages, and St.Aubin in Jersey is named after him. His feast day is celebrated on March 1st.

St. Kentigern, also known as St. Mungo, is invoked as protection for children against bullies.
10. Academics J.Haqq-Misra and M. Larson published a research paper showing that when the traditional pirate activities of making people walk the plank, singing sea shanties, and fighting sea battles decrease, something else increases. What increases as piratical doings decrease?


Answer: All of these increase as piracy decreases

The tongue in cheek paper "Piracy as a Preventer of Tropical Cyclones", by Jacob D. Haqq-Misra (Department of Meteorology, Pennsylvania State University), and Michael B. Larson (Department of Physics and Astronomy, University of Wyoming), was published in "The Gospel of the Flying Spaghetti Monster" in 2005. It does indeed "prove" that as piracy has decreased over the years since 1600, the average temperature of the Earth, the average surface temperature of the sea, and the incidence of tropical cyclones and hurricanes have all increased.
Source: Author Rowena8482

This quiz was reviewed by FunTrivia editor Snowman before going online.
Any errors found in FunTrivia content are routinely corrected through our feedback system.
Most Recent Scores
Jan 21 2023 : Guest 76: 6/10
Dec 26 2022 : Guest 66: 5/10 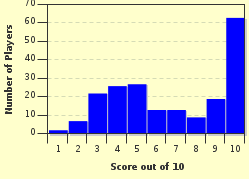