Ahoy me pirate lovers, come and test your knowledge on pirate flags! Good luck, have fun and arrr me hearties!

Quiz Answer Key and Fun Facts
1. What is the name of the pirate flag that is famous in the media?

Pirates generally had their own flag customised but this is the media famous one. It is thought pirates such as Emanuel Wynne, Edward England, Thomas Tew and Henry Every used this flag.
2. What design did the infamous Blackbeard have on his flag?


Answer: A horned skeleton holding an hourglass and a spear pointing at a bleeding heart.

This flag and its owner became infamous through out the Caribbean and was very much feared. It was said that when another ship saw the flag they surrendered straight away.
3. Who is reported to have FIRST used the famous Jolly Roger?

Around 1700, Emanuel Wynne, a French pirate, first used the Jolly Roger. It had a skull and crossbones with an hourglass underneath.
4. We all know about black pirate flags, but what did it mean if a ship flew a red flag?

Throughout the seas the red flag was most feared and one you definitely wouldn't want to come across.
5. What design was on the flag of the infamous pirate captain Calico Jack?


Answer: A skull with two crossed swords under it.

Calico Jack was a moderately successful pirate mostly remembered because he had two famous female pirates in his crew, Anne Bonny and Mary Read.

Incidentally, Captain Jack Sparrow in "Pirates of the Caribbean" used this design of flag.
6. Bartholomew Roberts, sometimes known now as "Black Bart", is another famous pirate from "The Golden Age of Piracy". What was the design on his first flag?


Answer: Him and Death holding an hour-glass

This was Roberts' first flag. He later changed his flag to "Him standing on two skulls representing the heads of a Barbadian and a Martiniquian" shortly after he'd sworn vengeance on Barbados and Martinique.
7. Which of these statements is true about pirate flags?

All these statements are true. Pirates often flew false colours to get close to another ship then raised the Jolly Roger and opened fire. Some flags were red and some pirates just liked to change their flags.
8. Which of the following pirates had a flag with an arm holding a sword?

Thomas Tew was a 17th century English privateer who turned pirate. He only sailed on two major pirate voyages, and died on the second one. Tew first used the route, which was later called the Pirate Round. Other famous pirates, including Henry Every and William Kidd, later followed Tew's path.
9. What design was on the flag of pirate Edward Lowe?


Answer: A red skeleton on a black background

Edward Lowe was another pirate active during the "Golden Age of Piracy". He was infamous for being one of the more brutal pirates, inflicting horrible tortures on his victims.
10. Why was the Jolly Roger called the "Jolly Roger"?

No one is really sure why the flag was called the "Jolly Roger" there are a lot of different ideas behind it. Some people do think it is a corruption of "Joli Rouge" and others that the English Privateers did keep the red jack when they turned pirate. I don't think there was ever a famous pirate called Roger, i made him up.

Thanks for playing I hope you enjoyed my quiz!
Source: Author catden 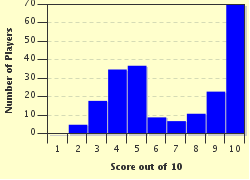 Related Quizzes
1. The Pirate Museum Average
2. Pirates! Average
3. All Right, Me Maties! Average
4. Under a Black Flag Average
5. The Pirate Crew Average
6. Men of the Jolly Roger Average
7. Terror of the seas ... Blackbeard! Average
8. Lady Pirates and Pirate History Average
9. A Small Pirate Ship is Called a Thug-boat Average
10. History of Pirates Average
11. Pirates of the Caribbean Average
12. A Pirate's Life for Me Easier


Other Destinations
Explore Other Quizzes by catden