Terror of the seas ... Blackbeard! Quiz

Pirates were the kings of the seas in the 17th and 18th centuries, apart from Mary Read and Anne Bonny who were the Queens of the ocean! See how much you know about one of the most well known pirates - Blackbeard.

I wouldn't want him teaching at my school!
2. When was Blackbeard born?


Answer: Date and year are unknown

Most people believe it to be 1680, although this can't be proved.
3. What was Blackbeard's final ship called?

Not only was it his final ship it was the ship that saw his last battle at sea. In fact, Blackbeard had 41 ships over the course of his career, one of which was The Queen Anne's Revenge!
4. Where did Blackbeard's final battle take place?

It was his favourite hideaway and where there were lots of pirates having big parties with plenty of rum, but such a big gathering wasn't such a good idea because Alexander Sportswood heard about it and began planning Blackbeard's capture!
5. Although Spotswood planned the capture of Blackbeard, who actually carried it out?

Maynard was very clever and managed to trap Blackbeard's ship in the inlet, all he had to do was wait for the tide to rise and the sandbars to be covered. Although the pirates prepared for battle, everyone was surprised when Blackbeard didn't even attempt to outrun the navy's sloops.
6. What was Robert Maynard's ship called?

In fact the other three ships are also names of British naval ships around in the 18th century.
7. What rank was Robert Maynard when he captured Blackbeard?

Not the highest rank but I bet that his reputation went up a few notches once he took down the last real pirate threat in the Caribbean. In fact, Blackbeard's capture was the beginning of the end of major piracy in those waters.
8. How many shots and cuts did Blackbeard die with?

Thats a lot of wounds, and no one can say Blackbeard didn't die without a fight.
9. When Maynard cut off Blackbeard's head after his death where did he put it?

It has been said that during that last battle an extra crew member was aboard ship that no one knew. People believed it was the devil and that is why Blackbeard's headless body ran amok before jumping overboard and swimming around the ship. Either way, Maynard sailed away with his head on a pole.
10. Where was Blackbeard's ship found in 1996?

It is now a major tourist attraction. With numerous books, films and documentaries made about him, there is no doubting that Blackbeard's legend will continue to live on.
Source: Author Maialese 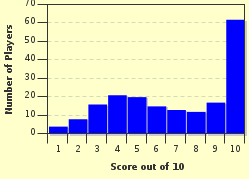 
Other Destinations
Explore Other Quizzes by Maialese