The True Pirates of The Caribbean Quiz

Quiz Answer Key and Fun Facts
1. Which Welshman became notorious as a pirate leader after conquering and looting the Spanish Panamanian strongholds of Portobello and Santiago Castle?

Henry Morgan conducted several raids on Spanish fortresses and garnered a large and loyal crew. He succeeded by raiding the fortress from land at night instead of by sea. He amassed a large fortune and lived out his days as a plantation owner. He died of natural causes in 1688. Don Juan de Guzman was president of Panama at the time. Thomas Modyford was an early governor of Port Royal. Blackbeard was another notable pirate.
2. What was the real name of the notorious pirate "Blackbeard?"

Edward Teach was an English pirate in the Caribbean Sea and western Atlantic during the early 18th century, a period referred to as "The Golden Age of Piracy." Blackbeard often fought wearing a large feathered tricorn hat and sporting multiple swords, knives, and pistols.

He had hemp and lighted matches woven into his enormous black beard during battle. Accounts of people who saw him fighting reported that he looked like the devil. Howard Pyle was a pirate illustrator. Robert Newton authored "Blackbeard the Pirate" and Edward Walsh was a trader on St. Mary's Island.
3. John Rackham was an English pirate captain who was known by what nickname?

John Rackham (December 21, 1682-November 17, 1720) was a pirate captain during the early 18th century. His nickname was derived from the colorful calico clothes he wore. John Rackham and his crew were executed in Jamaica. Bluebeard was another pirate. Long John Silver and Peg Leg Pete are literary pirates.
4. John Rackham had a lover who was a famous female pirate. What was her name?

Born in County Cork, Ireland, Bonny disguised herself as a man in order to join Rackham's crew aboard the "Revenge." The couple stole the sloop at anchor in the harbor and set off to sea, put together a crew and took several prizes. Anne took part in combat alongside the male pirates and accounts describe her as competent, effective in combat and someone who gained the respect of her fellow pirates. According to legend, she once stabbed a fellow pirate through the heart when he discovered her gender.
5. Mary Read was another famous female pirate. How did she meet her fate?


Answer: She died in prison.

Mary Read was part of Rackham's crew who were sentenced to hang for acts of piracy, but she claimed to be pregnant and received a stay of execution. It is unknown whether she was really pregnant or if she invented the story to delay her execution. Read eventually died in early 1721 while in prison, either by fever or perhaps during childbirth.
6. Which former privateer became governor of The Bahamas and is credited with driving the pirates from the islands?

Rogers was appointed Governor-in-Chief over the Bahama Islands by King George I on February 6, 1718. After he became governor he offered the "King's Pardon", which gave amnesty to most of the pirates in the isles. The most notorious and powerful pirates were not granted the amnesty and were hunted down and killed.

It was Woodes Rogers who found Alexander Selkirk, inspiration for the novel "Robinson Crusoe." William Dampier was a pirate crew member who chronicled his exploits. Dian Murray is a professor who studies pirates.
7. Which pirate was known for merely stealing the loot and leaving?

Greaves' greatest success was his capture of the Island of Margarita. After capturing the Spanish Fleet, he turned the guns of their warships against the forts which he then stormed and was rewarded with a huge booty of pearls and gold. He didn't sack the town or rape and torture the Spaniards. Greaves then retired to the life of a planter in the island of Nevis. One of his former victims turned him in for the bounty on his head.

He was quickly tried and sentenced to be hanged. When the great earthquake came that destroyed the town in 1680 he was one of the few survivors. Greaves then turned pirate hunter, retired to a plantation and died of old age.

He got the nickname "Red Legs" because his legs continually burned from the tropic sun.
8. Which pirate captain refused amnesty and fled The Bahamas, but was marooned after failing to capture a French Man-o-War?

During the height of his career Vane made a critical error in judgment. Vane and his crew happened upon a French Man-O-War and Vane chose not to attack the well-armed ship, figuring its plunder was not worth the risk. His crew was outraged and Vane was put in a small sloop and cast adrift. Through a variety of circumstances Vane continued his pirate endeavors but eventually ended up on a ship where the Captain happened to know of him and took him to Port Royal to be hanged. Captain Rosier commanded the British sloop "HMS Swallow." Captain Kidd prowled Madagascar and Captain Kangaroo...well that's another quiz.
9. How did the term "Buccaneer" originate?


Answer: Because of the way the sailors cooked.

The English and French who began to settle on the island of Hispańola around 1630 became known as buccaneers because they cooked their food on open fires known as buccans. The Spanish believed they could force the buccaneers to leave by removing their food supply so they sent hunters to slaughter the wild pigs that were their primary source of food. With the pigs gone many buccaneers were forced to resort to piracy in order to survive.
10. The city of Port Royal was famous for "Gallows Point" where numerous pirates were hanged. On which Caribbean Island is Port Royal?

Port Royal is situated in Jamaica opposite Kingston in the same harbor. Gallows Point was one of the first points of land visible when entering the port. The gallows were placed there conspicuously to discourage piracy. The bodies were left there after they were hanged. Calico Jack and Captain Vane were among the many pirates hanged there during a 100-year span.
Source: Author shanteyman 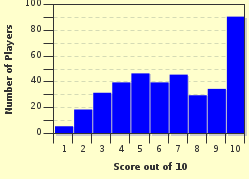