Do You Know Pirates ? Trivia Quiz

Here is a brief quiz to see how much you actually know about pirates and their colorful history.

Quiz Answer Key and Fun Facts
1. What was the real name of the famous pirate "Blackbeard"?

Edward Thatch (aka Teach) was nicknamed for his phenomenal beard. He became a pirate after capturing a French warship in 1717.
2. Which of these words was used for pirates operating in the Mediterranean?

Corsairs preyed upon the shipping lanes of the Mediterranean. The most famous corsairs were from the Barbary Coast of North Africa.
3. Which of these types of pirates were originally hunters of cattle and pigs on the island of Hispaniola (now home to Haiti and the Dominican Republic)?

Buccaneers got their name from the meaning of the French word "boucan" which was a grill. It is related to the word "barbecue". These pirates had a special hatred for the Spanish and regularly targeted their vessels.
4. Which of these were commissioned by their governments to seize or destroy a merchant vessel of another nation?

Privateers enabled governments to keep navies small and affordable.
5. Which of these alcoholic drinks is rumored to have been the favorite among pirates?

Rum was the favorite alcohol of pirates and has for a long time been popular in the Caribbean. Many rum brands associate themselves with a pirate theme.
6. The character "Jack Sparrow" in the Disney movie "Pirates of the Caribbean" is an actual historical pirate.

The character of Jack Sparrow is strictly fictional.
7. Which of these types of pirates would disguise their ships as commerce vessels when they were really warships?

Better known as "commerce raiders", they were warships disguised as merchant vessels but once they got close to enemy ships they'd suddenly open fire.
8. Pirates are merely historical and no longer exist in the 21st century.

An average of 500 deaths occur every year due to contemporary pirates. Pirates of today usually board large luxury motoryachts with a swift and quiet dinghy and try to steal things, kill, or do both and take over the yacht all together. Many private yachts carry some kind of protection in case this type of situation might happen, whether it be a shotgun, etc.
9. Which of these is NOT another term for pirates?

A swab is traditionally someone who has been assigned the duty of "swabbing" or cleaning the decks of a ship, rather frequently. All the other terms refer to the different names pirates acquired in certain regions of the world. Kapers were Dutch pirates, freebooters was an English name for pirates, and picaroons came from a spanish word to describe pirates meaning "rogue".
10. Which of these luxury-liner cruise ships was attacked by pirates on November 5th, 2005?

The Seabourn Spirit was attacked by pirates on November 5th, 2005 about 70 miles off the coast of Somalia. Pirates boarded the ship from two small boats. The pirates used machine-guns and rocket-propelled grenades when attacking. Luckily only one person, a crew member, was slightly injured - due to shrapnel.
Source: Author rhyano19 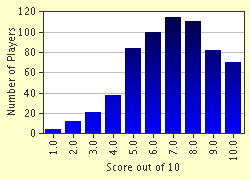 
Other Destinations
Explore Other Quizzes by rhyano19