Were Pirates black-hearted knaves, men of honour or just your garden-variety psychopaths? Find out as you sail the Seven Seas onboard the good ship 'Jolly Roger', and watch your step as you buckle your swash!

Quiz Answer Key and Fun Facts
1. Which of these pirates was considered the most successful for having taken 400 ships in the space of only three years?

Bartholemew Roberts was captured by pirates in 1719 and ended up joining them. Due to his competency he was elected captain upon the death of the previous captain, Howell Davis. Roberts was killed in 1722, in battle. His crew threw his body overboard rather than let it be taken by the British Navy.
2. Which pirate went by the name "Blackbeard" due to braiding his beard with lighted tapers so as to appear more fearsome to his victims?

Edward Teach (aka Blackbeard) was one of the most notorious of the pirates. In 1718 Blackbeard actually blockaded Charleston until a ransom (in the form of a chest of medical supplies) was delivered to him.
3. Which pirate was told, when going to the gallows, that if he had "fought like a man" then he would not have to "die like a dog"?

'Calico' Jack Rackham sailed with two women pirates - Anne Bonney and Mary Read. When attacked by the British Navy the male pirates were too drunk to defend the ship and only Anne Bonney and Mary Read made any attempt to fight off the attackers. Oh boy (or is it Oh buoy), was Anne Bonney annoyed.
4. Which pirate bought his own ship, rather than stealing it, and became a pirate, according to legend, to get away from his wife's nagging?

Stede Bonnet actually purchased his own ship and hired a crew. This was different from most pirate ships where the crew signed an agreement (Articles) that entitled them to a share of any plunder. The pirate crews also generally elected their own captains. For a short time Stede Bonnet was in a partnership with Blackbeard but Blackbeard basically kept Bonnet a prisoner and made what use he liked of Bonnet's ship, the 'Revenge'.
5. Which pirate made so much money that he was able to retire, only to miss the pirate life, return to the sea and to be killed while trying to capture a prize in the Red Sea?

Thomas Tew was a famous pirate whose base was at Madagascar. Tew and his crew took a richly provisioned Indian ship. The booty was so rich that each man of Tew's crew received 3,000 pounds as his share. Retirement didn't agree with Tom Tew, who returned to piracy only to die while attacking another ship.
6. Which pirate was so cruel that, shortly after an instance of interrogating prisoners (and literally eating the heart of one of the prisoners), most of his crew deserted?

It is reputed that Francis l'Olonnais once cut the heart out of a prisoner and started to chew on it while interrogating other prisoners. It was shortly after this that his crew deserted him - he was too much of a psychopath for their taste (if you'll pardon the expression).
7. Which pirate, after deciding not to attack a French warship, was voted out as captain, and replaced by Jack Rackham?

Charles Vane was a pirate captain on two occasions. Other pirate captains distrusted him. His eventual fate was the end of the hangman's rope.
8. Which English pirate, after stealing from the East India Company, received a pardon from the French and retired to France where he became a wealthy shipping magnate?

Originally, Condent was a privateer for the British during the War of Spanish Succession. After taking an Arab ship prize, Condent was worried that the ship had been doing business with the East India Company. However, he had made enough loot to allow him to retire at that stage.
9. Which pirate was the captain of the 'Happy Delivery'? His eventual end was to suicide rather than face the hangman.

Lowther was originally First Mate on a slave trader. Due to disputes between the ship's captain and Lowther there was a mutiny and the crew elected Lowther as captain. The root causes of the mutiny were the terrible conditions sailors were expected to work under and the callous attitude of the captain towards his crew.
10. Which pirate was commissioned as a pirate hunter in 1696, before turning pirate in the Indian Ocean?

Captain Kidd was neither particularly successful nor ruthless. Kidd had previously been a privateer against the French. While hunting pirates and not being able to find any he decided to turn pirate, he took prize of an English ship which had been flying a French flag as a lure to pirates - Kidd wanted to return the ship to its owners but the rest of the crew wouldn't allow this. Upon his return to New York he was arrested and sent to trial in England, found guilty and hanged.
Source: Author dgcox 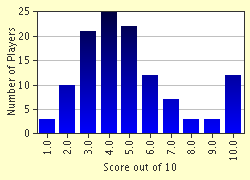 
Other Destinations
Explore Other Quizzes by dgcox