This quiz is about the history of piracy and pirates at sea.

Quiz Answer Key and Fun Facts
1. The English word "pirate" is derived from which of the following Latin terms?

The English word "pirate" is derived from the Latin word "pirata" and has its origins in the Greek word "peirates", meaning "to attempt, to attack , to assault".
2. Which of these personalities was kidnapped by Cilician pirates in 75 BC?

In 75 BC, while sailing to Rhodes, Greece; Caesar was kidnapped by Cilician pirates. The pirates asked for a payment of 20 talents to set him free. He joked with them saying, he was worth fifty. After they freed him, he hunted them down and killed them.
3. Which buccaneer led the expedition across the Pacific coasts, recorded by Basil Ringrose?

Ringrose wrote an elaborate, revealing account of the adventure of the buccaneers across the Isthmus of Panama. This journal later became a part of Alexander Esquemelin's "Buccaneers of America".
4. The Wokou pirates of East Asia first appeared in the 13th century, with a pirate raid in Korea. To which East Asian country did they originally belong?

Wokou means "Japanese Bandits". They raided the coasts of China and Korea. Their nationalities included Chinese, Korean and Portuguese. Many of their leaders - Pirate Kings were Chinese.
5. The Cossacks of Eastern Europe raided Turkey three times. Parts of Istanbul were burnt, which forced the Ottoman Sultan to flee his palace. In which year did this incident take place?

Cossacks were dwellers of southern region of Eastern Europe and Asia. They were excellent horsemen and had a military tradition. The Don Cossacks are the most popular.
6. Which Portuguese vessel did the pirates John Taylor and Olivier La Bouche capture at Reunion Island, robbing the ex-Viceroy of Goa of diamonds and rare oriental treasures worth more than Ł800,000?

Nostra Senhora do Cabo means "The Virgin of the Cape" or more literally "Our Lady of the Cape".
7. Which pirates captured the Mughal ship Fateh Muhammed in 1694?


Answer: Thomas Tew and Henry Every

The biggest loot of Henry Every's career was the Gang-i-Sawai. It was a part of the Moghul of India's convoy of ships. Gang-i-Sawai and Fateh Muhammed were the two ships that could be captured.
8. The most famous and extensive pirates in medieval Europe were the Vikings, warriors, raiders and looters from Scandinavia. Which period in history is often referred to as the "Viking Age"?

Vikings were warriors on ships, pirates and traders who originated in Scandinavia. They raided the British, Irish and European coasts from late 8th to 11th century. This period is called the Viking Age.
9. The flag flown in order to identity a pirate ship is called Jolly Roger. When did this term first come into use by a pirate(s)?

Variations of the Jolly Roger have also been used by mercenaries, teenage gangs, the SS and some Neo-Nazis.
10. Piracy does not exist any more.

Yes. Piracy continues modern times.
Indonesia had the highest number of piracy attacks(more than 40) in 2006.
Advances in technology, reduced international ocean patrol and lack of regulation and the rise of failed states are some of the reasons that have led to the rise of piracy in modern times.
Source: Author reenarage 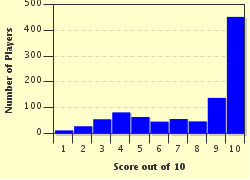 Related Quizzes
1. The Pirate Museum Average
2. Pirates! Average
3. All Right, Me Maties! Average
4. Under a Black Flag Average
5. The Pirate Crew Average
6. Men of the Jolly Roger Average
7. Terror of the seas ... Blackbeard! Average
8. Lady Pirates and Pirate History Average
9. A Small Pirate Ship is Called a Thug-boat Average
10. Pirate Flags Average
11. Pirates of the Caribbean Average
12. A Pirate's Life for Me Easier


Other Destinations
Explore Other Quizzes by reenarage