This is a quiz about lady pirates, pirate history, and what happened to them.

Quiz Answer Key and Fun Facts
1. Were there female pirates?

Women could only be pirates if they dressed, fought, and swore like men. It is thought that many who managed that are unknown because they were disguised so well.
2. Which of these was a real woman pirate?

Anne Bonny fell in love with Mary Read when she joined the crew disguised as a man. When Jack Rackham's pirates were captured they were executed. Ann Bonny escaped the death penalty since she was pregnant. She got a pardon and got to live a normal life afterwards.
3. Which of these was a woman pirate?

She fought in the Navy at first, but when Rackham's pirates captured her ship she joined them. Together with Anne Bonney, she escaped the death penalty because she was pregnant, but later she died of a fever.
4. Was Charlotte De Berry a pirate?

Despite her French name she was born in England in 1636. Her pirate career began when she led a mutiny against a cruel captain and cut off his head. Once when she and her crew were starving they killed two slaves, and her husband too, so they could eat them. She was very active off the coast of West Africa.
5. Did all pirates use the skull and crossbones for their flag design?

Pirates of an island in the Bahamas had their flags made by a sail-maker's widow who took payment in brandy. Blackbeard a.k.a Edward Teach (or Thatcher) had his own personal flag.
6. Were all pirate flags black and white?

One flag that was all red meant death to all that saw it and that the pirates would show no mercy in the battle.
7. How much did the manacles that William Kidd wore in 1699 in a Boston jail weigh?

Kidd was hanged twice in 1701 because the first rope snapped the first time. They covered his corpse in tar to make it last so it could serve as a warning to all seamen.
8. From which ship was Blackbeard's head suspended?

He was captured by Lieutenant Robert Maynard in November 1718.

By 1850 it seemed that only a few small bands of pirates were left, but piracy is still very much with us in the 21st century, for example off the coast of Somalia.
9. What part of the ship was Blackbeard's head suspended from?

When the navies made the ocean safe people began to forget about pirates' "murderous ways". Writers turned pirates from robbers into heroes, but some tell true pirate stories.
10. What was the British Royal Navy's "ultimate pirate buster" ship called?

Bartholomew Roberts sailed into battle against this ship and got shot in the neck. He was either very brave, or very stupid, or both.
Source: Author LadyKnight101 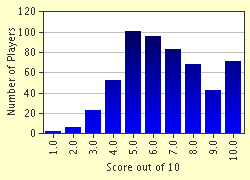 
Other Destinations
Explore Other Quizzes by LadyKnight101