A quiz on the most photographed woman of all time the late, great Princess Diana.

Diana was born at Park House on the Sandringham estate in 1961.
2. Which member of Diana's family had a romance with Prince Charles?

Diana's eldest sister Sarah had a fairly brief romance with Prince Charles in the late seventies.
3. Where were Diana and Charles married?

The marriage was held at St Paul's because Prince Charles liked the acoustics there better.
4. Charles and Diana had a disagreement over what to call their first son. What name did Charles favor?

Charles wanted to call their baby Arthur but Diana objected and the name William was chosen. Arthur is one of his middle names.
5. What illness did Princess Diana suffer from?

Diana suffered from chronic bulimia for years, made worse for a long time by her unhappy marriage.
6. Which of the following definitely had an affair with Princess Diana?

Hewitt and Diana had a long running affair during the eighties and early nineties. Diana said in her famous interview that she 'adored him'.
7. What nickname did Diana attach to Camilla Parker-Bowles?

Diana called Camilla "the Rottweiler". Camilla called her "that ridiculous creature".
8. In what city did Diana die?

Diana was of course killed in a terrible car crash in Paris along with her boyfriend, Dodi Fayed.
9. Who delivered a stirring eulogy at Diana's funeral in Westminster Abbey?

Diana's brother Charles Earl Spencer gave a fanatastic eulogy which contained some cutting remarks about the media and Diana's former royal in-laws. At the end everyone outside applauded - a reaction that swept into the Abbey and shocked the Queen and other royals.
10. Where is Diana buried?


Answer: On an island at Althorp

Diana lies on an island in the middle of a lake at her ancestral home of Althorp House in Northamptonshire.
Source: Author avory 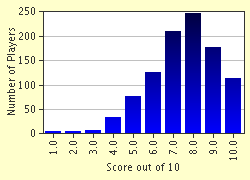