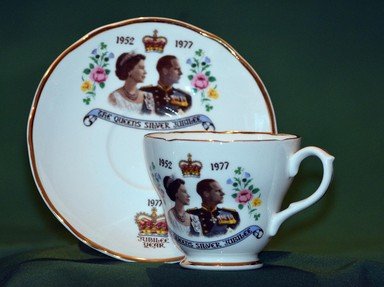 Tales of the Coronation Trivia Quiz

September 9, 2015, marked the day when Elizabeth II became the longest-reigning British monarch in history. It is fitting to look back on her Coronation Day in 1953, and reflect upon her incredible accomplishments.

Quiz Answer Key and Fun Facts
1. Where was Elizabeth II when she received the news that she had succeeded to the throne?

King George VI was ill and unable to make the planned tour of Kenya, Australia, and New Zealand. He accompanied Princess Elizabeth and Philip, Duke of Edinburgh, to the airport, and they flew to the first stop of their trip, which was Kenya. At that time, Kenya was a dangerous place. The Mau Mau Rebellion had just erupted, and some thought the situation might be too dangerous to continue the tour.

Princess Elizabeth was already accustomed to the idea of "Stay Calm and Carry On"! The couple spent their first days in Kenya at the Treetops Hotel, and moved on to Sagana Lodge, which had been a wedding present to the couple from the people of Kenya. While it is believed that the King passed away while the Princess was at Treetops Hotel, she did not hear the news until she had arrived at Sagana Lodge. The Duke received the message first, and took his wife on a walk in the garden in order to privately tell her what had happened. At 2.45pm on February 6, Princess Elizabeth not only learned of her father's death, but also became Queen.
2. Over a year after her accession to the throne, the Coronation of Queen Elizabeth II took place. Where was the Coronation held?

Since 1066, it has been the responsibility of the Archbishop of Canterbury to conduct the Coronation Ceremony. For the first time, another Church official, the Moderator of the Church of Scotland, also took part in the ceremony. Sadly, the Queen's grandmother, Queen Mary, had passed away in March 1953.

She became, however, the first Queen to see a grandchild ascend to the throne. Her will specifically stated that her death should not prevent the Coronation being held as scheduled.
4. How did Queen Elizabeth arrive at her Coronation?

The Gold State Coach was commissioned by the British Royal Family in 1762, and has been used at every coronation of the British monarchy since the time of George IV. A bit cumbersome, the coach weighs four tons and is drawn by eight horses. King William IV equated riding in it to a ship "tossing in a rough sea", and Queen Victoria complained of "distressing oscillation", often refusing to ride in the coach. Philip, The Duke of Edinburgh, rode in the coach with the Queen on her Coronation Day; since then she has used it twice - during her Silver and Golden Jubilees.
5. The Coronation of Queen Elizabeth II was the first to be televised in England. Which part of the Coronation service, the one with the deepest significance, was always shielded from the public, and was shielded from the cameras as well?

According to "The Official Website of the British Monarchy", "The Coronation service fell into six basic parts: the recognition, the oath, the anointing, the investiture, which includes the crowning, the enthronement and the homage". During the anointing the Queen was to be anointed with oil that had been made for her father's Coronation.

In 1941, however, a bomb hit the room where the oil was stored. The pharmacy that had mixed the last batch was no longer in business. However, the recipe was found and a new batch was made.

The anointing oil was poured from an eagle-shaped ampulla into a spoon which is used to touch the monarch's hands, chest (heart), and head. Four representative Knights of the Garter held a silk canopy over the Queen to conceal the ceremony from the public, including the congregation in the Abbey.
6. During the Coronation, Queen Elizabeth II was presented with what symbol of chivalry?

During the investiture segment of the Coronation, the Queen was first given golden spurs, which symbolized chivalry. Then she received a jeweled sword, and armills, which are golden bracelets of sincerity and wisdom. Finally she put on the Robe Royal, or Imperial Mantle, and received the Coronation Orb, Coronation Ring, Glove, and lastly the Septre.

A total of 8,251 guests attended the Coronation Ceremony at Westminster Abbey, which lasted approximately three hours.
7. Queen Elizabeth II was crowned while seated in which official chair?

King Edward's Chair, also known as the Coronation Chair, used by British monarchs since 1300, is kept at Westminster Abbey. Commissioned by Edward the Confessor, most of the British monarchs have sat on the Coronation Chair when they were crowned. Queen Mary II used a replica chair, as she was crowned jointly with her husband, William III, who sat on the original chair.

There is also discussion as to whether Queen Mary I agreed to sit on the same chair as her Protestant brother, Edward VI. However, the truth of that may never been known! Several different chairs are actually used for the Coronation ceremony.

The Chairs of Estate for the Sovereign and Consort are used for the first part of the service, and the Chair of Homage is where the Queen was seated during the Homage segment.
8. Who was first to pay homage to the newly-crowned Queen Elizabeth II?


Answer: The Archbishop of Canterbury and other bishops

An indication of how deeply religious the Coronation is, the Archbishop of Canterbury and the bishops were the first to give Homage to the newly-crowned Queen. Next, members of the Royal Family pledge their fealty; Prince Philip was the first to do so at the Queen's Coronation, followed by Prince Henry, Duke of Gloucester and Prince Edward, Duke of Kent.

The Earl Marshal, who in this case was the sixteenth Duke of Norfolk, was responsible for organizing the Coronation. However, Prince Philip was the committee chair. It took sixteen months to plan the event, and several different committees were established that contained members from all over the British Commonwealth. According to one source, the date, June 2, 1953, was chosen because meteorologists advised that the date would be statistically expected to have the best weather. By all accounts, however, it poured that day, but did not dampen spirits and enthusiasm.

Another reason that so much time was elapsed after accession and before coronation was to allow a respectable mourning period for the Queen's father. (In medieval times there was no such gap as newly ascended kings needed to assert their position without delay).
10. At the conclusion of the Coronation, what song did the guests sing as the Queen was exiting the building?


Answer: "God Save The Queen"

The national anthem of the United Kingdom, the song was first published with something close to its present tune in 1745. In fact, while other countries of the UK have their own national songs, "God Save The Queen" (or King!) is also widely used as the national anthem of England.

The return route chosen to Buckingham Palace is said to have been the longest possible in order to allow as many people as possible to see the Queen's procession. The route was 7.2 kilometers and stretched 3 kilometers with 16,000 participants. It took approximately two hours! The Queen appeared on the palace balcony twice - once with her family upon returning to the palace, and later in the evening to turn on the "Lights of London".

In conclusion, a recent quote by her grandson, Prince William, who was asked to write a preface to a new biography about the Queen, seems to say what needs to be said about the Queen's newest accomplishment. On September 9, 2015, she broke the record of Queen Victoria, 63 years and seven months (23,226 days, 16 hours and 23 minutes), as the longest-reigning monarch in British history.
Source: Author ponycargirl 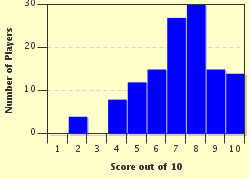 Related Quizzes
1. Queen Elizabeth II: War to Coronation Average
2. The Queen By Any Other Name... Tough
3. A Right Royal Mess? Average
4. God Save the Queen! Elizabeth II Easier
5. And We Live to Keep the Promise Average
6. Remembering The Queen Average
7. The Queen's Gifts Average
8. 'Lilibet's' 50 Year Reign Tough
9. The Queen's Title Tough
10. London Bridge Is Down Average
11. The Queen of Our Lives Average
12. Seventy Years on the Throne Average