Who was my Owner? Trivia Quiz

Some animals will give you some clues to help you decide just who their famous owner was.

Quiz Answer Key and Fun Facts
1. My name was Caesar and I was a Wire Fox Terrier. In 1910 I walked in front of kings and princes at my master's funeral. Who was my owner?

When Edward died Caesar suffered from inconsolable grief and spent many days whining outside his master's bedroom door.
2. My name was Monte and I was the first horse my owner ever bought. He was an artist famous for his depictions of the Old West. My owner was ______?

Charlie Russell owned Monte for 23 years and was devasted when the horse died in 1903 aged 31.
3. My name was Moortje and I was a cat. I was left in the care of neighbours when my family went into hiding from the Nazis. My young owner was Anne _______?

After the Frank family's hiding spot was discovered they were sent to a concentation camp where Anne was to die of typhus. She was 15 years old.
4. I was a cat named Foss. I was the inspiration for the nonsense poem 'The Owl and the Pussycat' which was written by my owner. Who was my master?

Foss died in 1887, two months before Lear's own death. The cat was given with a full burial in a grave, with a tombstone, in Lear's Italian garden.
5. My name was Centaur Pendragon and I was an Irish Wolfhound. My owner was a famous silent movie actor who is best remembered for 'The Sheik'. Who was my master?

Valentino died in 1926 as a result of a perforated ulcer. He was only 31 years old.
6. My name was Igloo and I was a Wire Fox Terrier. I flew over both the North and South Poles with my owner. My owner was Admiral Richard ____?

Once Byrd got rather drunk and he begged his companions, 'Don't tell Simon about this. Don't tell Owen. And above all, don't tell Igloo.'
7. My name was William the Conqueror (or Willie). I was a white bull terrier. My master was a famous WWII general. I accompanied him everywhere even into combat areas. Who was my owner?

Patton wrote in his diary about Willie. He said 'My bull pup . . .took to me like a duck to water. He is 15 months old, pure white except for a little lemon on his tail which to a cursory glance would seem to indicate that he had not used toilet paper. . .'
8. My name was Slippers and I was a gray tabby cat who had 6 toes on each foot. My master was the 26th President of the United States. Who was my owner?

Roosevelt and his family had many other pets as well including a racoon, a zebra and even a lion!
9. My name was Duke and I was an Airedale. I was a childhood pet and the source of my owner's nickname. Who was my owner?

Wayne and the dog were inseparable. They used to wander the streets of the town of Glendale together and the local firemen called Wayne 'Big Duke' and the dog 'Little Duke'.
10. Our names were Friendless Brother and Crazy Christian and we were just two of about 30 cats owned by the man who wrote 'A Farewell to Arms'. Who was our owner? 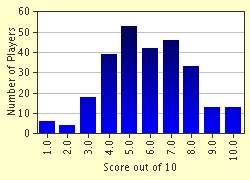 
Other Destinations
Explore Other Quizzes by Kuu