Cats have been loved through the history of man. Let's see if you can find the very famous owners of these special felines. Meow and Purrrrr (this means good luck!).

"Socks" was an abandoned kitten and was found under Chelsea's piano teacher's front porch. He became one of the most famous presidential cats of all time. "Socks" received fan mail by the bag-load at the White House and even had books written about him. "Socks" did made a serious mistake though.

When the chocolate lab by the name of "Buddy" came to live with the Clinton household, "Socks" made it clear that he would allow no intruders of the canine persuasion. Things only got worse and when the Clintons left the White House they gave "Socks" to the president's secretary, Betty Curry.
2. "Caterina" (sometimes spelled "Cattarina") was a tortoise-shell cat that belonged to an impoverished writer. "Caterina" was a loyal and devoted pet particularly to the writer's dying wife, Virginia. Who was this writer?

Edgar Allan Poe's wife was dying of consumption (tuberculosis) in the cold and damp of winter. They could afford no heating in their home. "Caterina" took it upon herself to keep Virginia warm and she was totally devoted to her job of tending to her sick friend. Poe was extremely impressed and named "Caterina" as Virginia's official nurse.

He even wrote "The Black Cat" in honor of "Caterina".
3. There was a kitten, a California kittie, named "Marcus" who had been a gift from a very famous actress with violet eyes. The fortunate recipient of "Marcus" was also extremely famous in Hollywood. It was too bad that he loved fast cars as well as "Marcus". Who was the owner of "Marcus"?

The night before James Dean fatally crashed his sports car, he gave "Marcus" to his friend, Jeanette Mills, with instructions for feeding and also a note for his vet. It is not known what became of "Marcus". We cat lovers would like to believe that Jeanette became his Mommy and took good care of him for the rest of his life.
4. A cat by the name of "Misty Malarky Ying Yang" belonged to a very special lady in the White House. What is the name of this special lady?

Yet another "presidential puddy", only this time of the Siamese persuasion. This was one smart cat. He especially loved steak and seafood from the White House kitchen, and was known to make frequent forays to the kitchen in hopes of a handout worthy of a presidential puddy.
5. "Jock's" owner didn't own this ginger colored feline for very long, but after directing a mighty country through war, he was content to be at peace with "Jock" whom he loved very much. At tea time, "Jock" was served a warm saucer of milk as he really didn't care for tea as his owner did. Who was "Jock's" famous owner?

When Churchill lay dying, "Jock" stayed in his bed with him. Churchill was so happy for the attention that the little ginger cat gave him that "Jock" was named in his will.
6. The Easter season was not at all kind to this presidential cat lover. His favorite feline friend was named "Tabby". A rather common name for such an aristocratic animal, but he was nevertheless greatly loved by his owner. Who was the owner of "Tabby"?

Abraham Lincoln was a huge cat lover, but it is quite obvious that he didn't have much of an imagination when it came to naming cats. He had four cats during his White House years and all four were named "Tabby".
7. We wonder if this famous lady adopted any felines during her stay in Crimea. We do know that in her later life she had a large Persian by the name of "Bismark". Who was this famous lady who owned "Bismark"?

The "Great Mother of Nursing" and the "Lady with the Lamp" did a great deal to better hospital conditions and procedures. She was also a cat lover of the first order, as she shared her home with more than sixty cats during her lifetime but was particularly fond of "Bismark".
8. "Slippers" seems too quiet a name for a cat whose owner charged up hills. Who was the owner of "Slippers"?

Quiet or not, "Slippers" was a big part of Teddy Roosevelt's life. "Slippers" was a grayish mixed-breed tabby with extra toes on each foot.
9. This giant tom cat was named "Hinse", and lived in the first quarter of the nineteenth century. His "staff member" was a Scottish novelist and poet that loved both canines and felines. What is the name of the Scottish novelist?

"Hinse" was a big tough cat that had a reputation for terrorizing dogs, particularly Scott's own bloodhound, "Nimrod". Unfortunately for "Hinse", "Nimrod" lost his patience on one fine day in May and did away with the feisty feline. "Nimrod" lived happily and feline free for the rest of his life.
10. "White Heather" had the run of the castle and was the very favorite of this Queen in her later life. What is the name of the Queen?

A huge black and white fluffy Persian was Victoria's special feline. In 1901, as Victoria neared her death, she made arrangements for the cat to be cared for by her son who would become the new king, Edward VII.
Source: Author tigey 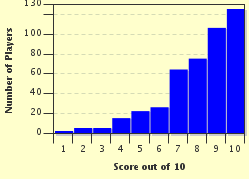 
Other Destinations
Explore Other Quizzes by tigey