We cats have been responsible for many pivotal moments in history. Our "owners" have made landmark decisions, discovered incredible theories, written amazing works and fought incredible battles. Or have they?

Quiz Answer Key and Fun Facts
1. My name? - Master's Cat. I, dear reader have supervised and proofread many a fine novel. I was the brain's trust for the man who fed me. Can you really imagine a simple man capable of thinking up names like Scrooge and the Artful Dodger? Phrases like "It was the best of times, it was the worst of times"? Who is this so called writer? I'm trusting there is a kipper for my tea.

Charles John Huffam Dickens (1812-1870) is described as an English novelist. Piffle. My genius is what shines through the pages of "A Christmas Carol" (1843). "Oliver Twist" (1838), and "A Tale of Two Cities" (1859).
When my mother gave birth to three kittens, I was the one selected by Mr. Dickens due to my superior intelligence and obvious literary ability!
I was known as 'Master's Cat'. It is well documented that I would snuff out master's candle to gain his attention. It was all so, so easy.
2. My master was truly a mixed bag. He was ready enough to design me a very useful cat door, but have you any idea how long I sat in that apple tree dropping fruit on his poor bewigged head? Of course his name is now synonymous with the word "gravity". No mention of me. No matter. My work here is done. Of course - you do know his name - thanks to my meddling ways.

Yes - it's perfectly true. My master Isaac Newton (1642 - 1727) first described his thoughts on gravity in 1666. He has never truly acknowledged who helped his theory take shape. It is of little consequence as I was there and I alone know. I will admit however that it was his idea to create a special hinged door so that I, along with my cohorts could move freely about the house without disturbing him.
3. Blatherskite here. My literary talents speak for themselves. You will be well familiar with my characters Tom and Becky. Huckleberry is a wonderful name - don't you think? I chose it because it rolls off the tongue rather like a satisfying purr. My master - now there's a character. I arranged for him to use the new fangled typing machine to transpose my ideas and story lines. My human was an unusual man - granted. I never much cared for his name though - "Samuel". So I arranged for him to change it.

Samuel Clemens (1835 - 1910) was the name my fellow was born with. I think Mark Twain hangs together a good deal better. "Tom Sawyer" (1876) and "The Adventures of Huckleberry Finn" (1884) are my best known works. I organised the typewriter so that my ideas could be recorded faster and indeed the first manuscript in typed form was submitted by us in 1883.

A fine joint effort even if I do say so.
4. Oh dear - yes I know I'm a large and very furry Persian but my mistress was very fond of me. She had reason to be. Bismarck's the name. I was the driving force behind an amazing woman. She revolutionised nursing practices especially sanitation techniques. Well how could she help but do so when she had me - the scrupulously clean Bismarck as a role model? I do have one complaint however. I could not tolerate that wretched owl Athena. Ah well - she made my mistress happy. As did I - and a remarkable mistress she was.

Florence Nightingale (1820 - 1910) was a wonderful nurse and excellent follower of instructions. I watched as she meticulously taught other nurses the sanitary techniques that we had devised together. She was also a very diligent keeper of statistics under my guidance. We highlighted the incidence of needless deaths caused by unsanitary conditions. I know she loved me dearly, but Athena the little owl held a special piece of her heart.

She had the little bird embalmed when it died.
5. Tom Kitten reporting for duty. Yes. I know what you are thinking - a cat has no place in the Oval Office. I was aided in my missions by the young mistress of the house who dragged me everywhere under her arm. Once ensconced in a comfy chair I essentially ran the country. I certainly forestalled a huge standoff involving missiles and a place called Cuba. I think my master was grateful for my tactical skills.

John F. Kennedy (1917 - 1963) was a man I could admire mainly because he listened and heeded my advice well. Young Caroline took me everywhere and would often burst in on very important meetings with me in tow. It suited my purposes admirably. I had a fine instinct about the Cuban Missile crisis (1962) and my advice was excellent. I essentially hauled the world back from the murky brink with my delicate paw.
6. My name is Jock. Mr. Jock to those dunderhead kittens down in Whitehall. World War Two. A triumph for feline intelligence. My master used to annoy the life out of me. He would insist on puffing those dreadful cigars but I put up with the smell because he helped me win the war by giving voice to my instructions. The victory was mine for the most part. I would haunt the operations room and move tactical pieces with a mere flick of my tail when no-one was watching. You do know the speech "We shall fight on the beaches"? - all mine. Of course the world will attribute the words to another.

Yes. Winston Churchill (1874 - 1965) was devoted to me. I desperately wanted to call it C-Day for obvious cat related reasons but was overruled. I also coined the phrase "a wing and a purr" but it lost something in translation. June 4th 1940 was the day of the beaches speech. I coached from the arm of his chair. After all, I attended all war cabinet meetings. I have even had a special portrait commissioned of me in all my ginger glory.
7. It is rude to stare and quite frankly we are not amused. My name - White Heather - and yes I am very fat and pampered. My mistress called me by this name because of her love of Scotland. She felt I had a special gift for divining a person's true nature and she was right of course. She ruled her Empire wisely under my guidance and I was proud that she was such an exceptional sovereign.

Queen Victoria (1819-1901) was indeed an excellent mistress. My wonderful Angora ways appealed to her and she fed me fish, fresh steak and the finest chicken. I was very sad when she died in 1901. Her reign at that time was the longest the people of the land had ever seen. I continued to be pampered and loved however in the household of her son - Edward.
8. It is late afternoon here in Haworth. My name is Tabby and I am helping my mistress with her latest revisions. This used to be Tiger's job but he died last year. I am pleased with the development of the characters - especially Catherine and Heathcliffe. I am also delighted that my advice to set the novel amongst the Yorkshire Moors has been heeded. My mistress is indeed a diligent pupil under my tutelage.

My mistress Emily Brontë (1818 - 1848) also used the pseudonym Ellis Bell. This was against my express advice but she felt it was easier to write some of her works as a man. Sadly our novel "Wuthering Heights" (1847) was not an immediate success. Miss Emily was an isolated and sometimes lonely lady but Tiger and I did our best to keep her amused and educated.
9. Hodge the cat - that's me - and a lover of fine food, especially oysters. My master fed me these treats regularly which I knew to be very good brain food. Highly important for the work we faced - the very first dictionary. I had a major influence on this defining work but not all my opinions were acted upon. I tried to remove all reference to dogs or canines - I shudder even thinking of these creatures. I was ignored and so they remain in the pages of our work. I received no royalties, only oysters. My master is the name people remember when they think of the dictionary.

Dr. Samuel Johnson (1709 - 1794) and I compiled the "Dictionary of the English Language" (1755). I know he valued my contributions as I often heard him refer to me as a "a very fine cat indeed". The people of London finally recognised my importance in 1997 when a bronze of me and my oyster was unveiled in Gough Square.
10. My name is Catarina but I would secretly prefer Lady Catarina. My master was a wonderful writer under my guidance. I had but one major disagreement with him and that was when he wrote about that pesky raven. I had other plans for that bird but for once I didn't win. My master also wrote "The Black Cat" as a tribute to me. Naturally.

Edgar Allan Poe (1809 - 1849) was a difficult man. He valued my thoughts however and you will see many phrases and plots woven through his works that are entirely mine. Imagine my delight when he wrote "The Black Cat" (1843). Entirely deserved of course.
Source: Author Nannanut 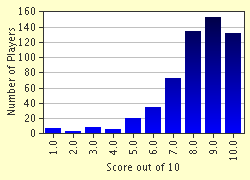 
Other Destinations
Explore Other Quizzes by Nannanut