Imagine if Twitter already existed during the Bible Era, this might be the tweet those biblical characters tweeted. But the tweet is missing the correct hash-tag. What is the appropriate hash-tag? I use NIV here.

Amen was the last word in The Bible. (Revelation 22:21) We used amen to end prayers and to express strong agreements.
3. @Egypt Ah. This is the place where it all started #Jacob #OldMemories _______ [NIV]

Genesis 37:22 "Don't shed any blood. Throw him into this cistern here in the wilderness, but don't lay a hand on him." Reuben said this to rescue Joseph from the other brothers and take him back to his father.
4. World! Me and my husband Boaz, would like to introduce Obed _______

When Jesus was arrested, Simon Peter said he would follow him until the end, but instead he denied him thrice, as mentioned in John 18:15-27.
6. @Paul_Followers Healthy Tips: Add wine to your diet if you have problem with your stomach. _________

Matthew 5 talked about the Sermon on The Mount. Matthew 2 talked about how mothers were grieving when King Herod decided to murder all babies younger than two years old, while John 2 talked about the marriage at Cana.
8. @Dad I will inherit the earth! #Sermon_on_the_Mount _________

On the Sermon On The Mount: It was told that people who are meek will inherit the earth. People who have pure hearts will see God. People who are merciful will be shown mercy, and people who are peace-makers will be called children of God. Matthew 5:1-12.
9. @Paul_Followers I have finished my race. #lastTweet ______

Paul was jailed by Governor Felix, until Felix resigned with no verdict given. Then a new governor came called Festus. Paul asked for appeal to Caesar (Acts 25.11). Since Paul was a Roman, Festus must comply Paul's request. There in Rome, Caesar gave the death verdict.
10. @Paul_Follower EXTRA: @Paul just raised Eutychus from dead. _____________ #miracle

Eutychus was watching Paul preach. Unfortunately, he went to sleep while sitting on the window and fell down from the third floor.[Acts 20:9-12]
Source: Author Realdeo 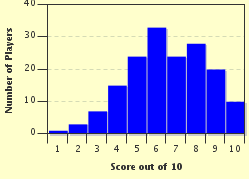 
Other Destinations
Explore Other Quizzes by Realdeo