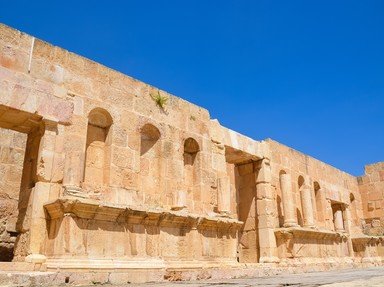 This quiz is part of a series looking at the books of the New Testament. 2 Corinthians is where the gospel meets WWE. Paul, on the ropes and having to defend against his opponents' dirty tricks, still finds the strength to inspire. Come and step inside.

Quiz Answer Key and Fun Facts
1. Which of the following best expresses the view that most scholars hold about 2 Corinthians?


Answer: It is composed of fragments from more than one letter

The context for 2 Corinthians is a ruptured relationship with the Corinthian church that has now been repaired. In chapter 2, Paul alludes to a "painful" letter he had written:
"I wrote as I did so that when I came I should not be distressed by those who ought to make me rejoice. I had confidence in all of you, that you would all share my joy. For I wrote you out of great distress and anguish of heart and with many tears, not to grieve you but to let you know the depth of my love for you" (2 Corinthians 2 v. 3-4)

Most commentators accept that this letter (or some of it) has been included within the present 2 Corinthians. In fact, there are probably two such letters - the first written at an early stage of the falling out (chapter 2 v. 14 to chapter 6 v. 13); the second after things had considerably worsened (chapter 10 v. 1 to chapter 13 v. 10). These two fragments, and possibly others, have been inserted into the framework of Paul's subsequent letter of reconciliation.

If you want to see one of the original joins, compare the following passages:
"Now when I went to Troas to preach the gospel of Christ and found that the Lord had opened a door for me, I still had no peace of mind, because I did not find my brother Titus there. So I said good-by to them and went on to Macedonia." (chapter 2 v. 12-13);
"For when we came into Macedonia, this body of ours had no rest, but we were harassed at every turn - conflicts on the outside, fears within. But God, who comforts the downcast, comforted us by the coming of Titus, and not only by his coming but also by the comfort you had given him. He told us about your longing for me, your deep sorrow, your ardent concern for me, so that my joy was greater than ever" (chapter 7 v. 5-7).
2. Paul states in the first chapter that he had intended to visit Corinth. What reason does he give for not having done so?


Answer: It was in order to 'spare' them

Paul appears to have made three visits to Corinth. The first, recorded in Acts, was with Timothy and Silas (Acts 18 v. 1-17). He announces a second visit at the end of his first letter to the Corinthians (1 Corinthians 16 v. 5-7). It is assumed that this is what Paul refers to as the "painful visit" (2 Corinthians 2 v. 1). A third visit was planned, when tempers were still high, and during which Paul anticipated having to discipline the church (2 Corinthians 12 v. 14-21), but he opted against the heavy approach and waited until relations had been restored:
"I call God as my witness that it was in order to spare you that I did not return to Corinth" (2 Corinthians 1 v. 23).
Although Corinth is not specifically mentioned, the third visit probably took place during Paul's final trip to Greece (Acts 20 v. 1-4).
3. Chapter 2 suggests that someone had been agitating against Paul. What does he say has happened to that person?


Answer: They have been punished by the Corinthian church

"If anyone has caused grief, he has not so much grieved me as he has grieved all of you, to some extent - not to put it too severely. The punishment inflicted on him by the majority is sufficient for him." (2 Corinthians 2 v. 5-6)

Paul goes on to say that he has forgiven the offender and the church should do so too (2 Corinthians 2 v. 7). In his view, lack of forgiveness in such a situation is an easy way for Satan to exercise negative influence (2 Corinthians 2 v. 11).
4. "But thanks be to God, who always leads us in triumphal procession in Christ and through us spreads everywhere ________________." (2 Corinthians 2 v. 14) Which phrase completes this verse in the New International Version?


Answer: The fragrance of the knowledge of him

"But thanks be to God, who always leads us in triumphal procession in Christ and through us spreads everywhere the fragrance of the knowledge of him. For we are to God the aroma of Christ among those who are being saved and those who are perishing. To the one we are the smell of death; to the other, the fragrance of life." (2 Corinthians 2 v. 14-16)

The image of the triumphal procession is based upon the parades organised by returning rulers after military victories. The incense spread along the parade route would have smelt sweet to the victors but rather less so to captured prisoners, now rendered slaves.

Paul may also intend the image to be ambiguous. Elsewhere in the letter he asks whether the true ministers of the gospel are manifested in triumphalism or weakness. Does he intend us to see him as one of the victors in Christ's parade; as one of Christ's slaves (1 Corinthians 7 v. 22); or as both at the same time?
5. A major theme of the letter is that of weakness. One way that Paul conveys this is by talking about the treasure of the gospel being carried in what?

"But we have this treasure in jars of clay to show that this all-surpassing power is from God and not from us." (2 Corinthians 4 v. 7)

Paul seems to have suffered a multi-pronged attack from the Corinthians. One such attack was against his credentials as a charismatic Christian leader, a "super apostle" (2 Corinthians 11 v. 5). This is a charge against which he regularly has to defend himself in his letters. Paul's response is to take a contrary approach and to state that God's power is truly shown, not in people that are humanly impressive but in seeming weakness:
"If I must boast, I will boast of the things that show my weakness" (2 Corinthians 11 v. 30).
6. Paul further extends the weakness analogy by describing our human bodies as tents that will one day be torn down. What does he cite as the "deposit" guaranteeing the "eternal house" that is to come?

"For while we are in this tent, we groan and are burdened, because we do not wish to be unclothed but to be clothed with our heavenly dwelling, so that what is mortal may be swallowed up by life. Now it is God who has made us for this very purpose and has given us the Spirit as a deposit, guaranteeing what is to come." (2 Corinthians 5 v. 4-5)

The image is drawn from the world of business where a deposit or down payment secures the legal right to purchase, even if collection takes place at a later time. For the early Christians, belief in Jesus Christ was paramount and the presence of the Holy Spirit, manifested in miracles and spiritual phenomena, was seen as the conclusive proof that they were right in this belief.
7. With whom, according to chapter 6, should the Corinthians avoid being yoked?

"Do not be yoked together with unbelievers. For what do righteousness and wickedness have in common? Or what fellowship can light have with darkness?" (2 Corinthians 6 v. 14)

This verse is often used to support the assertion that Christians should not marry non-Christians. Paul may well have supported this view but there are two major problems with this approach when the verse is looked at in context.

Firstly, assuming that Paul wrote these words, they do not refer to marriage or sexual relationships but to the attitude the Corinthians should have towards those who are opposing Paul and his message.

Secondly, many commentators doubt that Paul could have written the passage from chapter 6 v. 14 to chapter 7 v. 1 because the ideas expressed are so different to his usual theology. These verses advocate a very Jewish idea of purity that involves separation from the pagan world and not touching unclean things (2 Corinthians 6 v. 17). This is vastly different to Paul's statement in his first letter that he is perfectly happy to eat food offered to idols (1 Corinthians 8).
8. In chapter 10, Paul appears to be summarising the contents of a critical report drawn up by some in the Corinthian church. Which of these charges does it level against him?


Answer: All of these charges

"For some say, 'His letters are weighty and forceful, but in person he is unimpressive and his speaking amounts to nothing.'" (2 Corinthians 10 v. 10)

Reading between the lines of the letter, Paul had also had to contend with several other accusations. The most dangerous of these was that he was preaching for monetary gain. This was an issue he had already addressed in his first letter where he defends the right of an apostle to receive financial assistance, whilst insisting that he had waived this right whilst in Corinth (1 Corinthians 9). His opponents had, no doubt, made insinuations about the real purpose of the collection Paul was organising as he is quick to state that he did not "peddle the word of God for profit" (2 Corinthians 2 v. 17).
9. Paul encourages the Corinthians to be generous in supporting a collection previously mentioned in his first letter. What was the purpose of this collection?


Answer: Support of the church in Jerusalem

In the book of Acts, we read that Paul and Barnabas had previously visited Jerusalem with financial assistance from the Christians in Antioch. This was after the prophet Agabus had predicted a famine (Acts 11 v. 27-30). It has been suggested that the problems facing the Jerusalem church were partly of their own making. The policy, described in Acts 2, of selling all personal possessions and supporting the poor, was admirable in expectation of an imminent second coming but a lousy foundation for long-term survival in the midst of persecution.

In raising a collection from the Gentile churches, Paul was also keeping a promise made to James, Peter and John on his visit from Antioch:
"All they asked was that we should continue to remember the poor, the very thing I was eager to do" (Galatians 2 v. 10).
10. Paul provides many reasons why the Corinthians should be generous in their giving. Which of these does NOT appear in this letter?


Answer: The love of money is the root of all evil

"For you know the grace of our Lord Jesus Christ, that though he was rich, yet for your sakes he became poor, so that you through his poverty might become rich." (2 Corinthians 8 v. 9)

Despite the fact that Paul is on the defensive through most of the letter, he does come out with some truly inspiring phrases such as these. That list also includes the statement that Christians are being transformed into God's likeness with ever-increasing glory (2 Corinthians 3 v. 18), a verse taken up by Charles Wesley in his hymn, "Love Divine":
"Changed from glory into glory,
Till in heaven we take our place".

Paul did write that the love of money is the root of all evil, but this quote appears in 1 Timothy and is not used as an encouragement to generosity.
Source: Author glendathecat 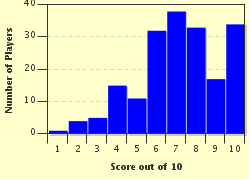