Something about the Bible Trivia Quiz

How well do you know the Bible? Here is a quiz to test your knowledge! All quotations are from the KJV. I hope you enjoy it! :)

Quiz Answer Key and Fun Facts
1. What is the first book in the New Testament?

According to ancient tradition, Moses wrote Genesis, Exodus, Leviticus, Numbers, and Deuteronomy.
3. Where was Moses born?

Moses was born in Egypt, in the period of time when Pharaoh wanted to kill all the Israelite baby boys. But Moses's mother hid him from the Pharaoh's soldiers (Exodus 2).
4. My brother was Esau and we were twins. I was the younger one but Esau sold his birthright to me for a bowl of red bean soup. Later in my life, I had two wives, Leah and Rachel, and twelve sons. Who am I?

Saul, with all his sons, died in battle against the Philistines (1 Samuel 31).
6. What are the names of the two books in the Protestant Bible that are named after women?

The books of Ruth and Esther are only named after them, they didn't write those books. Ruth was a Moabite who was willing to follow her mother-in-law to Canaan after both their husbands died. You can read more about her in the Book of Ruth.

Esther was a Jewish queen, the wife of the Persian king, Ahasuerus. She saved the Jews from an evil man. You can read more about her in the Book of Esther.
7. The first book of the Bible is what?

The book of Genesis means "the origin". It is named "the origin" because it tells us about the creation of the world in chapters 1 and 2.
8. Psalm 23:1 says, "The LORD is my ___; I shall not want." Complete the verse from the KJV.

King David wrote many psalms. Psalm 23 is only one of them.
9. I was the first woman God created. I am the wife of Adam. But I ate the Forbidden Fruit, and I tempted my husband Adam to eat it too. As a result, sin entered the world and we were exiled from The Garden of Eden. Who am I?

"The fruit of the Spirit is love, joy, peace, longsuffering, gentleness, goodness, faith, meekness, temperance; against such there is no law" (Galatians 5:22-23).
Source: Author pinkbunny98 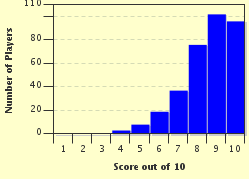 
Other Destinations
Explore Other Quizzes by pinkbunny98