This is my fifth Bible quiz. I hope you enjoy it.

Quiz Answer Key and Fun Facts
1. How many chapters are in the book of Psalms?

Psalms is the longest book in the Bible. The 23rd Psalm is often read at funerals.
2. Where was Abraham from?

Genesis 11:27-28,12:1 Abraham was the father of Isaac which he almost sacrificed but God stopped him and provided a ram for him to sacrifice instead. This was a way for God to test Abraham's faith.
3. From which direction did the wise men that came to see baby Jesus come?

Matthew 2:1 says that the "wise men from the east" were sent on to Bethlehem by King Herod, who wanted to kill Jesus. They were supposed to come back and tell Herod when they found him but they never did. This caused Herod to have all of the baby boys killed.
4. When Jesus was on trial, who did the crowd want released instead of him?

Matthew 27:21 Barabbas was a murderer while Jesus had committed no crimes. Pilate even tried to get the people to see the error in their decision but they didn't change their mind so Pilate washed his hands of the matter.
5. How old was Sarah when Abraham was told she was going to have Isaac?

"Then Abraham fell upon his face, and laughed, and said in his heart, Shall a child be born unto him that is an hundred years old? and shall Sarah, that is ninety years old, bear?" (Genesis 17:17). Abraham (100) and Sarah (90) were both elderly when they had Isaac.
6. How many people were on Noah's ark?

Genesis 7:13 The people on board were Noah, his wife, his three sons, and their wives.
7. According to Genesis 1:1, what did God create in the beginning?

Genesis 1:1 The first thing that God created was heaven and earth.
8. Which of the following people is not related to Jesus?

Matthew 7:1
10. Where did Elijah challenge the priests of Baal?

1st Kings 18:17-19 It was a battle to see which god could create fire quicker. Of course when it was all said and done Elijah's god won and the priests of Baal were killed.
Source: Author hunt04 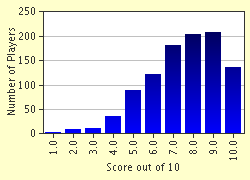