This and That in the Bible Trivia Quiz

See if you know the answers to a variety of questions about Biblical characters and situations.

Quiz Answer Key and Fun Facts
1. After driving Adam and Eve out from the Garden of Eden, what did God place at the entrance to prevent them from returning?

Cherubim are also mentioned as well as the sword. This sword is said to have turned "every way." Must have been a scary sight! (Genesis 3:24)
2. After the big flood, what was the first thing Noah did after exiting the ark?

Noah showed prompt respect for God and thanks for being saved from the disaster. (Genesis 8:13-21). Noah and his family and the animals with them had been in the ark for almost a year (Genesis 7:11 and 8:13).
3. According to the Gospel of Matthew, what did John the Baptist eat when he was in the wilderness?

John was not unlike a survivalist. He ate for sustenance, feeling that his work of preparing people for Jesus' ministry was more important than mere food. Of course, if you're hungry enough, locusts might be appetizing. John's diet is mentioned in Matthew 3:4.
4. What liquid did Samuel the prophet use to anoint David as king of Israel?

To "anoint" literally means to pour oil upon. The custom of anointing kings was to publicly show they had been chosen by God for that purpose. David was chosen to supersede King Saul because Saul was no longer following God's will. This ceremony is found in 1 Samuel, Chapter 16.
5. Did Jacob have more than one wife?

When Jacob was fleeing from the anger of his brother Esau, he lived with his uncle Laban for many years. While there, Jacob saw Rachel, Laban's daughter, and fell in love. Jacob wanted to marry Rachel, but Laban tricked him into a marriage with his older daughter, Leah, whom Jacob did not love. Jacob had to work for Laban 14 years to be allowed to wed Rachel. Since Leah was not loved, God blessed her with many children, but Rachel only had two and died giving birth to Benjamin.

In all, Jacob had 12 named sons and a daughter by his two wives and his wives' two handmaids. Jacob's story is in Genesis 29 - 35.
6. According to Genesis, how did Enoch die?

Enoch was one of the two Biblical people who didn't die in the traditional sense; the other was Elijah. Enoch was the great-great-great-great grandson of Adam and the father of the oldest living person mentioned in the Bible, Methuselah. Enoch was apparently "taken" bodily by God in Genesis 5:24.
7. In Chapter 8 of the book of Acts, who did the Apostle Philip convert to Christianity?

Receiving a message from God, Philip was on his way to Gaza after visiting Samaria where he healed may sick people. On his way, he met an Ethiopian charioteer who was reading a passage in the Tanakh. Philip approached him and they discussed its meaning after which Philip baptized the Ethiopian. (Acts 8:26-39).
8. The prophet Daniel helped to interpret a dream of King Nebuchadnezzar. What was the image in the dream?

Nebuchadnezzar dreamed of a statue with a head of gold, arms and chest of silver, thighs of brass, legs of iron and feet that were clay mixed with iron. Daniel, with God's help, told the king it indicated the coming world kingdoms, starting at the head of gold which was Nebuchadnezzar. Each subsequent dynasty would be a little weaker than the previous one.

The details can be found in Daniel, Chapter 2.
9. What did Jesus do for Lazarus?


Answer: brought him back to life

In a well-known passage found only in the Gospel of John, Jesus raised Lazarus after Lazarus had been dead for four days. People were stunned and the Pharisees were offended. This can be read in John, Chapter 11.
10. Was the Apostle Simon Peter married?

Although no wife is directly mentioned, Peter's mother-in-law is in three of the Gospels (Matthew 8:14, Mark 1:30 and Luke 4:38). A person can only get a mother-in-law by marriage. Also, 1 Corinthians 9:5 may hint that Peter's unnamed wife may have accompanied him during his ministry.
Source: Author debodun 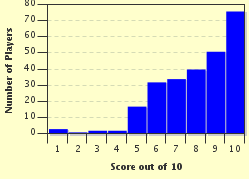