On living things with dino or deino in their names (or to be pedantic din if precedes a vowel). Dino comes from the Latin or Greek for terrible (as in inspiring terror). Just select the correct definition.

Deinotheres were a suborder with numerous species which survived until as recently as about 10,000 years ago. They were very like modern elephants, except that the trunk was shorter and they had downward curving tusks attached to the lower jaw. The way they used these tusks is unknown.
The largest species, Deinotherium giganteum, is possibly the second largest land mammal ever - only indricotherium was larger. A big male stood about four to 4.5 meters tall at the shoulder. It lived during the Pliocene epoch (7,000,000 to 2,500,000 years ago).
In Greece there are large deposits of deinothere bones. It has been suggested that these are responsible for the stories of giants in Greek myths.
The name means terrible beast.
2. Dinomyidae


Answer: A South American rodent (early Miocene to the present)

The family Dinomyidae once had eight genera but now only the pacarana survives. The pacarana lives on the forested slopes of the Andes and weighs up to 15 kg. Its extinct relative Phoberomys pattersoni is the largest known rodent. It lived in the Orinoco River delta about eight million years ago was three metres long, plus a 1.5 m tail. It probably weighed 700 kilograms.
The earliest records of dinomyids are from the Oligocene (37 to 24 million years ago).
The name means terrible mouse.
3. Dinosaurus (fortunately this name has been superseded)

It is now called the plateosaurus. It was a herbivore and grew to about eight metres long and could be either bipedal or go on all fours. Prosaurapods are thought to be ancestors to brontosaurus and its relatives and it looked like what you would expect if an animal were half way between evolving from a biped to a brontosaur. If anyone objects that a brontosaur should be called an apatosarus I say that brontosaur is a common name like dog is the common name for Canis familiaris.
The name means terrible lizard
4. Dinoflagelate


Answer: A one-celled, aquatic organism that acts like both a plant and an animal

Under favourable conditions dinoflagellate populations may reach 60,000,000 organisms per litre of water and cause the red tides that poison marine animals (and humans that eat shellfish). They also can cause luminescence in water. They range in size from about five to 2,000 micrometers (nearly a tenth of an inch)
5. Dinornis

Dinornis is another name for the moa. There are eleven known species ranging from turkey size to 3.5 metres (two metres at the back) and weighing up to 250 kg. Moas are unique amongst flightless birds because they have lost even vestigial traces of wing bones. Also the largest species Dinornis giganteus holds the record among birds and mammals for the difference in size of the female relative to the male - up to 280% bigger.
6. Dinochloa

Bamboos are a type of woody grass. They can attain heights ranging from ten cm in the smallest species to more than 40 metres. One species of dinochloa grows to 30 metres. They have fleshy fruit that can be produced every year. Dinochloa are found from India to Indonesia.
7. Dinocardium

It belongs to the family Cardiidae (cockles) which are heart shaped when the two valves are viewed together.
The great heart cockle (Dinocardium robustum) grows up to 15 cm wide. It is found down to a depth of 30m and is good eating. Its distribution matches political boundaries quite closely as it is found along the coast of Brazil and the coast of USA from Mexico to Canada.
8. Dinicthys

Dinicthys was also known as dunkleosteus. It was a primitive, armoured, fish that lived during the late Devonian Period (374 to 360 million years ago). It grew to a length of about nine metres, more than a third of which was an armoured head shield. It had a ball and socket joint that allowed the upper jaw to be raised in relation to the lower jaw and tooth plates permanently fixed to the jaws. The tail fin was a fringe round the fleshy part of the tail not like the tail of most modern fish.
Dinichthys was the dominant predator of its time (sharks had just appeared).
The name means terrible fish.
9. Deinopidae


Answer: A spider (Cretaceous to modern)

Dinopidae or deinopidae are a family of about 60 species of tropical spiders. They have three rows of eyes (eight in total), one pair of which are unusually large, producing an ogre like appearance which gives them the common name of ogre spiders.
The net-casting spider dinopis (which is often seen in documentaries) builds a small flat web of non-sticky woolly silk during the evening hours and then cuts the attachments and spreads the web among its four long front legs. During the night the spider positions itself head down then if a walking insect is detected, the net is pushed over the victim so it gets ensnared. Flying insects, like moths, are caught by flicking the web backwards. The spider abandons or eats the web in the morning and hides during the day camouflaged on a tree bark.
The oldest known specimen comes from 125-135 million year old Lebanese Cretaceous amber.
10. Dinomischus


Answer: A strange animal from the Burgess shale (middle Cambrian)

Dinomischus has been described as like a buttercup, a daisy and a sculptured wine glass. It was 20-25mm tall sessile (i.e. fixed to a solid object) animal that presumably filter fed. It is not totally radially symmetrical as it has a U shaped gut with a mouth and anus one of which is off centre.
It is one of the burgess shale creatures that many people claim should be in a phylum of its own (vertebrates are only a sub phylum). If it is not a phylum on its own it may be a Bryozoan (moss animal), Bryozoans grow into large mat or plant like forms.
The burgess shale fossil formation contains remarkably detailed traces of soft-bodied life of the middle Cambrian epoch (520 to 512 million years ago).
Apparently mischus means the seed of poplar, elm, etc. but why it is terrible is a puzzle to me.
Source: Author tnrees 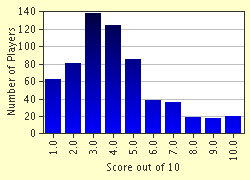 
Other Destinations
Explore Other Quizzes by tnrees