A to Z of World Winds Trivia Quiz

Our planet experiences many different types of winds with a variety of names - local, international, scientific or purely descriptive. This quiz examines some of these interesting winds.

Quiz Answer Key and Fun Facts
1. This wind occurs off south east Brazil, usually between May and September.

The abrohlos is a violent squall occurring normally between Cape Sao Tome and Cape Frio in Brazil. It has no connection with the Abrolhos Islands, an island group off Australia, named by the Dutch navigator Fredrick Hautman in 1619. Aprilus is the Latin word meaning to bloom or give birth, after which the month of April was named. Americaner and Angel's breath are names I made up.
2. Repeated twice, the name of this very strong wind is that of a Pacific island in the Society Islands group.

The bora is a strong north easterly wind which occurs in the Adriatic coastal regions of Italy and the Balkan States. It is created by cold winter winds crossing nearby mountain ranges, then descending rapidly to the coast. The word bora originates from the Greek boreas meaning north wind. in Greek mythology Boreas was the Greek god of the north wind, and it was he who devasted the Persian fleet of Xerxes I which was sailing to attack Athens in 480 BC.
3. This warm wind has the same name as that of a North American Indian tribe.

The chinook wind, sometimes called the 'snow eater', can give rise to spectacular temperature rises. On 22nd January, 1943 a chinook caused a temperature rise of twenty-seven degrees centigrade in just two minutes at the town of Spearfish in South Dakota. Chinooks occur on the eastern slopes of the Rocky Mountains, and their dry nature and high temperatures can lead to greatly increased forest fire hazard. Cho Oyo, by the way, is a Himalayan mountain on the border of Tibet and Nepal.
4. Where could you experience a diablo wind?

The diablo winds are named after Mount Diablo which is near San Francisco. These winds generally occur in the Bay Area and result from a combination of high pressure over Nevada and lower pressure over the Californian coast. Mount Diablo is sacred to the Miwok Indian nation, being the site of creation according to their tradition.

The mountain's name was given by early Spanish explorers because of the thick vegetation which they named 'Thicket of the Devil'.
5. The elephanta is a strong, dry wind which occurs in the central African plains.

The elephanta is a strong south or south easterly wind which occurs in the Malabar Coast region of south west India. It usually occurs near the end of the south west monsoon season in September or October. This wind is associated with very wet weather, and thunderstorms.
6. This local wind, which occurs at the same time almost every day, is believed to be the most consistent wind in the whole world.

The Fremantle doctor occurs almost every day between noon and 3 p.m in the coastal region near Perth, Western Australia. It is a cooling sea breeze which brings considerable relief to the inhabitants of the area, especially in summer when temperatures can rise to well over forty degrees centigrade. Sea breezes are the result of air movements due to very different heating and cooling rates between sea and land masses.

There are no wind types called French breeze, frigate wind or favourite.
7. This wind is also the name of a traditional thick wool coat, worn by both men and women in the mountainous areas of Romania.

The guba is a strong north-west wind, often of short duration, which occurs between November and March in the south coastal area of Papua, New Guinea. It is normally a nocturnal wind, and can reach speeds of fifty knots (over 57 mph) or more. Gitano is Italian for gypsy.

A gharial is a fish eating crocodile, resident in the Indian sub-continent, and a ghat is an Indian term for a landing place on a river.
8. This is a dry, east wind which blows across the west coast of Africa and the Gulf of Guinea.

The harmattan occurs in the winter months, and carries huge quantities of dust from the Sahara across the Gulf of Guinea. These dust storms can occasionally reach South America. The harmattan is sometimes referred to as the doctor, due to a mistaken belief that it has healthy properties.

In fact, the dust carried by the harmattan can cause lung damage, and has been linked to the annual outbreaks of meningitis which occur in the region where it blows.
9. Normally a popular tourist destination, this region regularly experiences strong winds and flooding caused by the kona. Where in the world does the kona occur?

The kona winds are named after the town of Kona on the island of Hawaii. They blow from the south or south west, and can reach speeds of sixty knots (nearly 70 mph) bringing severe flooding in their wake. Kona storms can affect any of the Hawaiian islands, and in December 1987 a kona storm hit the island of Oahu causing damage estimated at $35 million.
10. The name of this wind means 'where the sun rises'. It blows from the east, often bringing rain or fog, and can create a long streamer like cloud over a world famous landmark.

The levanter occurs during the summer and early autumn months, and is funneled through the Straits of Gibraltar by the Spanish mainland and the Atlas mountains of Morocco. It can reach gale force, but at lower windspeeds often creates a long banner cloud streaming for a mile or more to the west from the peak of the Rock of Gibraltar.
11. This is a cold offshore wind occurring in southern France, though it can extend as far as northern Spain and Italy.

The mistral is a katabatic, ie downhill, wind which arises in the mountains of France and flows down to the Mediterranean Sea. The Rhone Valley often creates a funneling effect which can increase the mistral strength to more than seventy knots (over 80 mph).
12. The delicious nashi pear is grown in many parts of eastern Asia, and also in Australia and New Zealand, but in which country could you expect to encounter the nashi wind?

The ostria wind is a south wind which occurs near the coastal regions of Bulgaria. It often signals the start of bad weather. Ostria is also a holiday beach resort in Crete, but there is no connection between this resort and the Bulgarian wind.
14. This very powerful wind can be extremely dangerous to mariners. It occurs in an area of the world known for its vast expanses of ice.

The piteraq, or piterak, is a katabatic wind which is formed on the icecaps of Greenland and Iceland. The Greenland piteraqs can be extremely strong, and have been recorded in excess of 140 knots (over 160 mph). The piteraq can last for several days, and with the accompanying extremely cold conditions, poses a serious hazard to any fishermen or other mariners who may be unfortunate enough to be caught out in it.
15. The reshabar is a katabatic (downhill) wind which occurs in the Caucasus. What does this wind's name mean?

The reshabar occurs throughout the year in the area of the southern Caucasus known as Kurdistan. In summer it is relatively warm, and in winter extremely cold. Katabatic winds occur where warm rising air is replaced by colder air flowing from higher elevations or colder regions such as ice sheets and large glaciers.
16. This wind, which blows from the deserts of California, is mentioned in Randy Newman's hit song 'I Love L.A.'. Surfers are possibly the only people who look forward to it.

The Santa Ana is a warm dry wind which blows offshore along the coast of California, roughly between Los Angeles and San Diego. It originates in the desert areas during periods of high pressure which force air towards the coastal region. This air compresses as it moves down towards the ocean, and it is this compression which causes it to dry out and increase in temperature.

The warm dry air, whilst enjoyable for surfers, can be catastrophic for farmers as it may cause damage to fruit crops and even wildfires.

The line in Randy Newman's song goes "Santa Ana winds blowin' hot from the North".
17. The tehuantepecer is a strong, sometimes violent, wind which occurs in Mexico. What is the meaning of this wind's name?


Answer: from the jaguar hill

The tehuantepecer is a strong, squally wind which occurs off southern Mexico during the winter months. It is created by high pressure over the Great Plains of the U.S.A. which forces air outwards. The tehuantepecer can reach speeds of over fifty knots (nearly 58 mph), and can travel over a hundred miles offshore, creating heavy seas and large swells.

It is named after the Mexican town of Tehuantepec, which means Jaguar Hill.
18. Author and playwright Gore Vidal gave the title of his first ever novel to this strong wind, named for the Inuit word for whirlwind.

Williwaws occur all over the world, but are prevalent in mountainous areas close to the sea. The best known williwaws occur in the Aleutian Islands and in the Straits of Magellan. They are created by very cold mountain air moving downwards, and can give rise to violent gusts which pose a serious hazard to mariners. Gusts of fifty to seventy knots are common, and the U.S. Coast Guard once recorded gusts of over 120 knots (138 mph) off Kodiak Island in Alaska. Gore Vidal's first novel 'Williwaw', set during the Second World War in the Aleutian Islands, was published in 1946.
19. The yamaoroshii, or yamarashi, is both the name of a katabatic (downhill) wind and a throw used in the martial sport of jujitsu. What is the meaning of this word?

Outside Japan, the yamaorishii is a little known wind, and even non-Japanese who practice jujitsu may not know the meaning of the word. It is a typical katabatic wind originating in the mountains of Japan, then travelling down towards the coastal areas gathering speed and replacing warmer air.
20. The name of this wind is also a Hebrew female name and the name of a prestige sports car.

There are two completely different types of zonda wind, both of which occur in Argentina. One is a foehn wind, i.e. a warm dry wind which originates on the lee side of a mountain range, and the other is a hot, humid wind which blows from the north of Argentina.

The foehn zonda originates on the eastern slopes of the Andes Mountains and sweeps across the pampas. The other is a hot, moist, tropical wind. The Pagani Zonda is a prestige sports car which can reach speeds in excess of 200 mph (332 kph).
Source: Author picqero

This quiz was reviewed by FunTrivia editor crisw before going online.
Any errors found in FunTrivia content are routinely corrected through our feedback system.
Most Recent Scores
Jan 08 2023 : Guest 76: 0/20
Jan 03 2023 : robbonz: 14/20 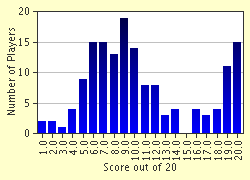 
Other Destinations
Explore Other Quizzes by picqero