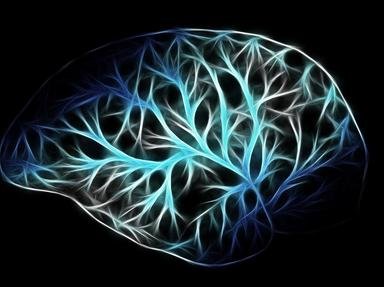 Tell the world's only Doctor Deputy what's the matter and I will tell you what you've got. Actually, since this is a quiz, you have to tell me what you think you've got.

The swollen neck glands gave it away. Your tonsils are infected, either from a strep infection or from a viral infection. Antibiotics may help. If tonsillitis recurs or never fully goes away, the tonsils may be removed.
Viral infections can be a real strain. (Get it? Virus strain.)
2. You have been diagnosed with a deviated septum. Where would that be?

The septum is the wall between your nostrils. If the septum is crooked it is called "deviated". A deviated septum, while not generally serious, can cause snoring, trouble breathing and frequent nosebleeds. Surgery can be performed if necessary.
Do not overlook your nose. It is the "scenter" of your face.
3. Dr. Deputy observes that your mouth and one eyelid droop. You also appear to be unable to move one side of your face. What's the matter?

Bell's palsy results when a facial nerve becomes inflamed, thus becoming unable to function properly. No one knows what causes it. It can suddenly come on a person, usually in the morning when they awaken. Bell's palsy can go away after a few weeks all by itself. When it lasts longer, doctors will use electrical stimulation in an attempt to stop permanent damage to the facial muscles from atrophy. Corticosteroids may also be used.
"There was a crooked man and he walked a crooked mile,
He found a crooked sixpence upon a crooked stile.
He bought a crooked cat, which caught a crooked mouse.
And they all lived together in a little crooked house."
And that man's name was Bell Palsy.
4. Emerson Moser, senior crayon maker for Crayola, was actually color blind. What colors can a person usually with a form of color blindness not perceive?

A color blind person sees two colors as the same. Red may appear the same as green. Emerson Moser was blue-green color blind. Another form, monochromacy, means people can only see shades of brightness.

Someone applying for a pilot's certificate has to pass the red-green vision test. I passed mine with flying colors.
5. You are having chest pains--they may range from slight pressure to crushing pain. The pains extend to the left shoulder, down the arm, and possibly into the jaw. You are also light-headed, sweating, nauseous and short of breath. Of these choices, what's the matter?

Chest pains are symptomatic of a heart problem. Because your heart is on the left side of your body, pain in the left shoulder and down the arm would also point to a heart problem. Angina is caused by the heart not getting enough oxygen. Age, high cholesterol, a history of smoking and high blood pressure can each cause blockage in the vessels that supply blood and oxygen to the heart. Angina may also be brought on by over-exercise, stress or over-eating. Any incidence of angina should be taken seriously as it could portend further heart problems. Would you call a heart surgeon who moonlights conducting the symphony a pace maker?
6. You come in with a cough that sounds like barking. You are wheezing, have a fever, have trouble swallowing and have general cold symptoms. I should also mention that you are a child. What's the matter?

Croup occurs most often in infants and children and often develops along with a cold or other viral infection. The most common symptom of croup is a cough that sounds like a dog barking or a goose honking. Croup can be treated with regular cold medicines as well as vaporizers or humidifiers.
Do be careful the first time you try a new cough syrup. You really have no idea what to expectorate.
7. You feel nauseous and experience a spinning sensation. You say you are sure you have labyrinthitis. So where should I check?

Labyrinthitis is the inflammation of the labyrinth which is part of the inner ear. There are three fluid-filled canals in the labyrinth that help the body detect motion. Should the canals become infected by a virus it can interrupt the movement of the fluid, thereby creating the sensations of dizziness, spinning and/or nausea.
If you have labyrinthitis, motion sickness medication may make your ear feel sound again.
8. You have severe pain in your lower back and groin accompanied by blood in your urine. You also feel nausea and keep getting infections. What's the most likely cause?

Solid crystals form in the kidney as a result of the filtration of fluid and waste. Sometimes the crystals form larger stones but these stones usually pose no problems. If they are less than 1/23 inch in diameter they pass through the ureter. Stones larger than 1/3 inch in diameter are too large to even enter the ureter so they stay in the kidneys. The problem comes when a stone between these two sizes enters the ureter but becomes lodged. These stones can cause excruciating pain which begins in the small of the back near the lower ribs. It has been described as a burning, stabbing pain that moves to the front of the body and down to the groin. Drinking lots of fluids to get more fluid through the ureter may cause the stone to pass. If that does not work or if the pain becomes crippling, doctors can use a cytoscope to grab the stone or a lithotriptor to sonically blast the stone into smaller fragments.

So far no one has established a kidney bank but England does have a Liverpool.
9. My wife sometimes accuses me of being unable to speak, write or understand the meaning of words. It usually happens when she is talking about stuff I need to do around the house. Or at least I think that's when it happens. I'm not sure. But I think I have a disorder. What disorder could cause a person to suddenly be unable to speak, write or understand words?

Aphasia can be caused by damage to the brain through a severe head injury, bleeding in the brain, or a stroke. (It can also be caused by 20 years of marriage but you didn't hear that from me.) Aphasia can occur in many forms. A person may only be able to understand simple words. In another case the person may be able to understand what is said but be unable to respond verbally or in writing or they may only be able to respond one way or the other. Global aphasia is when a person is totally unable to speak, write or understand.
Fasciitis is inflammation of the fascia which is a fibrous tissue binding nerves, muscles or blood vessels.
Anemia is the reduction in the number of red blood cells.
Lycanthropy is when someone turns into a werewolf during a full moon.
10. Your mouth and fingernail beds are blue. You have such trouble breathing that you have to resort to exaggerated chest movements and your shortness of breath is getting worse. You have lost weight because of this condition. What's the matter?

Emphysema is caused by damage to the lungs--primarily from smoking or being exposed to smoking. The membranes around the lungs become unable to introduce oxygen into the blood. Lack of oxygen in the blood causes blueness of the mouth and fingernail beds. In addition the breathing tubes collapse when you exhale, making it harder to inhale again. Treatment includes oxygen therapy, bronchodilators, anti-inflammatory medications and, in extreme cases, a heart-lung transplant or removal of a portion of the lung.
Symptoms of pneumonia are aches, chills, fatigue, cough, fever and wheezing.
Bronchitis is marked by chest tightness, shortness of breath and cough with mucus.
Source: Author deputygary 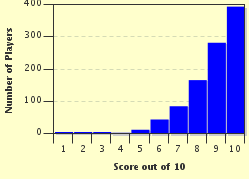