If you know your way about a dart board then this will present no problem for you. if not you just need to do a few sums.

Quiz Answer Key and Fun Facts
1. 'Shanghai' means a single, double and treble of one number. What score do you make with 'shanghai' on 20?

This can also be a pub game where players attempt to get 'round the board' with a single, double and treble of each number.
2. What have you scored if you hit a single 16, single 8 and double 20?

Most tournament games are played from 501 down and finish on a double.
3. How many have you scored if you hit treble 19, single 13 and bull?

The bull counts for 50 and is also considered a double in a game of 501.
4. What is your score if you hit an inner bull, outer bull and double 16?

Although the standard throwing distance is 7 foot 9 and three quarter inches, the famous News of the World tournament was played from an 8ft throwing line.
7. What have you scored if your next visit to the board produces treble 3, treble 17 and double 2?

He won the first four PDC Premier League titles 2005-06-07-08; he was undefeated for the first 3 years, and lost his first match at the start of the 2008 tournament to James Wade (an undefeated run of 44 matches).
8. Your next throw you hit a bull, double 7 and double 18. How many have you scored? 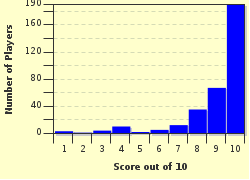 
Other Destinations
Explore Other Quizzes by baea