Hello darts fans! This quiz will test your knowledge of the players' nicknames from the Professional Darts Corporation.

Quiz Answer Key and Fun Facts
1. Phil Taylor is known as who?

Phil 'The Power" Taylor was one of the 16 original members who left the BDO to join the PDC. The others were John Lowe, Eric Bristow, Cliff Lazarenko, Keith Deller, Jamie Harvey, Bob Anderson, Dennis Priestley, Rod Harrington, Kevin Spiolek, Alan Warriner, Jockey Wilson, Peter Evison, Richie Gardner, Mike Gregory and Chris Johns.
2. In the Netherlands, Roland Scholten was once known as the 'Flying Dutchman', but what is his nickname?

Because of his tall and gangly appearance, Roland is known as the Tripod.
3. Adrian Lewis is one of the young guns of the game, but what's his nickname?

Adrian 'Jackpot' Lewis is also from Stoke-On-Trent like Phil Taylor. Stoke, the darts centre of the world.
4. 2008 World Champion John Part's nickname is what?

John Part's nickname comes from the facts that he lived in Canada and is a huge Star Wars fan. He loves sci-fi in general and when flying to tournaments, regularly reads sci-fi books.
5. Wayne Mardle is the entertainer of darts, but what is he also known as?

Wayne won his first televised match against Phil Taylor in the 2008 World Championship. It was the quarterfinal match but he lost to the eventual runner-up, Kirk Shepherd in the semis.
6. James Wade's has gone through more nicknames than he has dart shirts, but what's the one that he's decided on?

James is a talented player on the darts scene, and his nickname comes from the fact that he used to be a mechanic before turning professional and has a love of cars.
7. What is the English player Colin Lloyd's nickname?

'Jaws' Colin Lloyd was once ranked number 1 in the world and participated in the first three Premier Leagues, finishing 2nd, 4th, and 5th.
8. Peter Manley is the player that you love to hate in the PDC. His nickname is what?

Peter Manley is known as 'One Dart' because he is famed for only needing one dart at the double.
9. Mark Dudbridge is quite a well known player in professional darts, but do you know his nickname?

Mark made his first television in 2002 after deciding to take his playing seriously playing in the World Masters, which he won.
10. Mark Frost is otherwise known as?

Mark broke into the top 100 in rankings in 2008, making his debuts in many major tournaments.
Source: Author Tungsten180 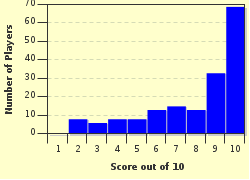 
Other Destinations
Explore Other Quizzes by Tungsten180